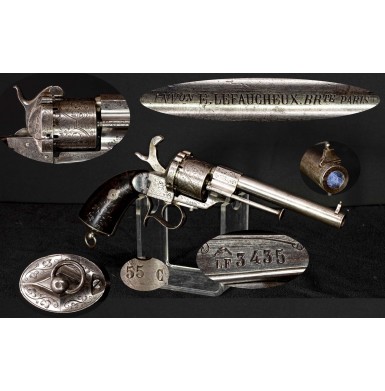 In many ways the large bore marital pinfire revolver, based upon the patents of Casimir and Eugene Lefaucheux was one of the most modern and advanced handguns to see use on the battlefield during the American Civil War. Thousands of these pinfire revolvers were imported for use by US troops, and at least a few hundred (and quite probably many more) saw service with Confederate troops as well. Although US government purchases only record about 13,000 Model 1854Lefaucheux patent pinfire revolvers as being officially purchased, along with over 2.2 million cartridges, surviving examples and regimental records indicate that far more than that were imported. The primary importer of M1854 revolvers was George Schuyler who purchased 10,000 Lefaucheux revolvers for the US government. Most of Schuyler’s purchases appear to have been made directly from Lefaucheux in Paris. However, extant examples indicate that many Belgian licensed copies were also imported during the war. The Ordnance Department did not appear to differentiate between the French and Belgian made versions, in much the same way that they often lumped French and Belgian made muskets together without any distinction at all. Other importers who provided pinfire revolvers to the US government included Herman Boker, Schuyler, Hartley & Graham, George Raphael (who provided the “Raphael” revolvers to the US), Alexis Godillot of Paris (who provided the Perrin revolvers to the US) and even Tiffany & Company. US cavalry units that received significant numbers of pinfire revolvers included the 5th IL, 2nd & 5th KS, 6th KY, 8th MO, 1st WI and the 9th MO State Militia Cavalry. The Springfield Research Service serial number books list the serial numbers for 69 Lefaucheux revolvers that were in the possession of Company B of the 9th Missouri State Militia Cavalry during 1863. These 69 revolvers range from serial number 33,895 through 42,522. This 9,000+ range of serial numbers within a single company of US cavalry makes it relatively easy to extrapolate that Lefaucheux revolvers within the 25,XXX through at least the 45,XXX range are within the realistic realm of US purchased revolvers that saw use during the Civil War. However, it is equally clear that any pistols with a lower serial number could easily have seen use during the war as well. Confederate units under the command of General Nathan Bedford Forrest had at least a few hundred of these revolvers in their possession in late 1864. A May 25, 1864 Ordnance Report from Meridian, Mississippi by Forrest showed his 1stDivision in possession of 190 French Pistols and his 3rd Division in possession of another 160. It is almost certain that these “French Pistols” were Lefaucheux revolvers. Additionally, in 1864 the Selma Arsenal was offering Lefaucheux revolvers for sale to Confederate officers at a price of $25 each, including 12 cartridges. In August of 1864, the Selma Arsenal listed the following pistol ammunition in their inventory “For French Pistol (Lefaucheux) caliber .472k – 52,800 rounds”. This is very clear indication that CS Ordnance Department was actively trying to keep ammunition available for a decent number of Lefaucheux revolvers in the field. Using the theory that the CS Ordnance Department was trying to maintain an inventory of between 20 and 50 rounds per pistol, this would indicate they were trying to keep between 1,056 and 2,640 pistols supplied from Selma alone.

The French Model 1854 Lefaucheux Patent Revolver offered here is a FINE condition, very crisp, early production factory engraved specimen that pre-dates the American Civil War. The right side of the frame shows the standard LF (Lefaucheux) prefixed serial number, which is 3435. The gun is the typical martial pattern single action pinfire pistol with an octagon to round barrel and a nominal caliber of 12mm. The caliber of these guns has long been debated as to whether they are 11mm or 12mm. The bore measures 10.95mm land to land and 11.15mm groove to groove. The cylinder chambers measure 11.15mm at the mouths and 12mm at the rear. Based upon the convention of the time that tended to refer to cartridge guns as being the caliber of their cartridge cases, I would call this a 12mm revolver. This same convention is why the modern .38 Special, which evolved from early cartridge alterations of .36 revolvers, has a .357” bullet but is still called a “.38” as that was the nominal case diameter during the period.

The top of the round portion of the barrel is marked in a single line:

The left side of the is not marked with the usual two line oval Lefaucheux patent cartouche, possibly due to the fact that the frame is engraved, or due to the fact that this is a relatively early production revolver. The gun is engraved with flowing, folk-art inspired foliate scrolls. The style is dramatically different than the tight banknote style foliate engraving of the English during this period or the geometric and floral combinations with shaded or punch dot backgrounds and geometric boarders favored by the Germanic style engravers working in New York during the same era. The revolver has the decorative engraving over the majority of the frame, as well as the cylinder, the barrel web, triggerguard and butt cap. The barrel is not engraved with the exception of the retailer marking and a simple foliate boarder at the muzzle.  The interior surface of the loading gate is marked with the assembly mark 55C. The same assembly mating mark appear between chambers on the rear face of the cylinder, on the face of the recoil shield, on the rear face of the barrel web and in ink inside both of the grips. All of the markings and engraving remain clear and crisp throughout the revolver. The gun appears to have been left “in the white”, with a bright metal finish that has dulled and aged with time and now has a mostly silvery gray patina. The metal is mostly smooth throughout, however there are some very lightly scattered patches of oxidized freckling present mixed with some age discoloration. There are some small, scattered areas of minor surface roughness and a couple of small areas of pinpricking; most notable on the top of the barrel just past the retailer marking. The revolver remains all correct and original throughout with no replacement parts noted. The revolver retains the original lanyard ring in the base of the grip and the original ejector rod along the right side of the frame. The original loading gate catch in present and functional as well. All of these parts are often damaged or missing, and it is uncommon to find all of the parts in place on one of these revolvers. The original two-piece grips are in about FINE condition and retain much of their original varnish. The grips are solid and free of any breaks, cracks or repairs. The grips show only the expected bumps, dings and handling marks from actual use, as well as a couple of tiny chips around the screw escutcheons. The revolver is in excellent mechanical condition and the action works crisply and correctly, with fine timing and tight lock up. The loading gate opens and closes freely, and locks closed, as it should. The ejector rod functions smoothly as well. The bore of the revolver is also in FINE condition. It retains crisp, deep rifling and is mostly bright with some evenly distributed oxidation and light pinpricking along its length, along with some frosting in the grooves.

Overall, this is a really nice example of the classic military pinfire pistol pattern that saw substantial use during the American Civil War. While this gun pre-dates the war and is embellished with period engraving it is still of the same pattern and style as the guns that saw Civil War use. The fact that it is an early production gun does make it a potential pre-war import to the United States, but that would be impossible to establish. The gun is in in very nice condition, with crisp engraving and has a wonderful look. It would be a great addition to any collection of mid-19th century firearms, particularly one that concentrates on early cartridge revolvers.