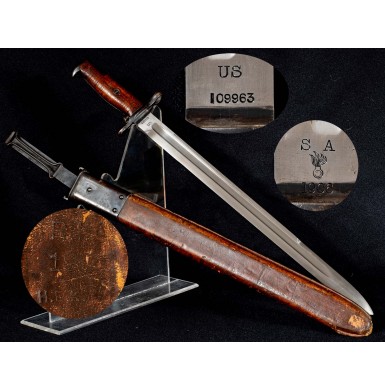 This is a VERY FINE condition example of the US Model 1905 bayonet, complete with a VERY GOOD+ condition M1905 Type II Scabbard. The US M1905 Bayonet was adopted to replace the ramrod bayonet that was originally an integral part of the US Model 1903 Rifle. The ramrod bayonet was a design hold over that was resurrected from the US Model 1888 “Trapdoor” rifles. Bayonet collector lore claims that the change from the rod bayonet to the new M1905 “knife” bayonet was championed by then President Theodore Roosevelt. The story claims that the President broke a ramrod bayonet when he accidently struck a column of the White House (see Kiesling p581). While this story may be apocryphal and difficult to substantiate, it is well known that President Roosevelt was always actively engaged in the use and development of small arms, and is known to have preferred a traditional knife style bayonet as it afforded the troops that carried them a useful tool in addition to a bayonet.

As it was initially adopted, the M1905 bayonet had a 16” blade and an overall length of about 20 ¾”. This made it useful as a real tool in the field, allowing it to function as a camp axe or even improvised entrenching tool. The M1905 bayonet was produced at both the Springfield Armory (1906-1922) and the Rock Island Arsenal (1906-1913), with a total production of just over 1.6 million units. The bayonet was produced with a wooden grip and was marked on the obverse ricasso with a US / {Serial Number} and on the reverse ricasso with the name of the arsenal where it was manufactured, over a “Flaming Ordnance Bomb”, over the year of production. The bayonet was initially produced with an armory bright blade, with only the first ¼” of the blade nearest the hilt blued. This was the standard finish until about mid-1917 when the blades were blued during the manufacturing process. Blued blades only remained standard until the end of 1918, and all subsequent M1905 bayonets were produced with Parkerized blades. During World War I, many of these earlier production “bright blade” bayonets were refurbished and had their blades blued as part of that process. Other “bright blade” bayonets were later parkerized as part of the refurbishment process between the end of World War I and prior to the outbreak of World War II. The end result is that original “bright blade” M1905s with the blued ricasso line are quite scarce, as are the all blued variants that were never Parkerized.

The M1905 bayonet was produced with four different types of scabbards during its lifetime. The first version (Type I) was a leather covered wooden body with a short, blued steel throat/mount and a swiveling belt hook with a clamping wire attachment. This pattern of scabbard was soon replaced by the Type II scabbard, which as nearly identical, but featured a much longer blued metal throat/ top mount. In 1910, the Type III scabbard replaced both of these. It had a rawhide covered wooden body that was contained in a canvas sleeve with a leather tip. The scabbard featured a wire belt hook attachment that could be mounted to the eyelets of the rifleman’s belt. This was the standard World War I era scabbard. After the war, many of the earlier Type I and Type II leather scabbards were modified for use with the rifleman’s belt and had the steel throat and loop system replaced with the wire mount system, which was secured by a leather frog that was attached to the scabbard throat. Although production of the M1905 bayonet ceased in 1922, the bayonets remained in service through World War II. The bayonet fit both the M1903 rifle and its variants, and the later production M-1 Garand. With the pressing need for more bayonets as a result of America’s entry into World War II, a new variant of the M1905 bayonet was adopted. The new pattern of bayonet is often referred to by collectors as the Model 1942, although it was really just the final type of M1905 bayonet produced. The new pattern was adopted and produced with a plastic grip instead of wood and a Parkerized blade. Later in the war the decision was taken to reduce the length of the blade from 16” to 10” and all new bayonets were produced with the shorter blade. Subsequently many of the older M1905 and “M1942” bayonets had their blades shortened to 10” as well.

This is a very nicely preserved example of a pre-World War I production M105 bayonet from the Springfield Arsenal, complete with very nice Type II scabbard. The bayonet is clearly marked on the obverse ricasso: U S / 109963, and on the reverse ricasso: S A / {Flaming Ordnance Bomb} / 1906. The bayonet retains most of its original arsenal bright finish on the blade, as well as much of the original thin line of blue at the ricasso. Somehow, this bayonet managed to escape the many rebuilding and refurbishing programs that occurred between 1917/18 and during the years lead up to and through World War II. The full-length 16” blade is almost entirely smooth, but there are a couple of minute flecks of surface oxidation on the blade here and there. The blade has escaped any significant sharpening but does show a number of very tiny, minor nicks along the edge of the blade. The hilt retains much of the original blued finish, with some loss due to fading and wear, with the blue thinning moderately at the points of contact. The original bayonet catch and release system is present in the hilt and functions perfectly. The roughhewn wooden grip panels are in very nice condition as well, although they do show some lightly scattered bumps and dings from use. The bayonet is contained in an original Rock Island Arsenal Type II leather scabbard that is in very nice condition. These scabbards had a tendency to wear at the tip and are often found with major wear and significant leather loss in this area. This bayonet scabbard has survived with some moderate wear and at the tip, which is an inherently weak area. The tip of the wood scabbard underneath is exposed by the loss of stitching at the tip and resultant shrinking back of the leather covering, exposing a small amount of wood. The remainder of the scabbard and accompanying stitching remains very tight and secure. The scabbard shows some moderate surface wear and finish loss with some scattered scuffs and rubs but retains much of its original dark brown finish. The blued steel scabbard throat retains some of the original bluing and has a moderately oxidized plum brown patina that has blended with the remaining blue. The original swivel mount functions smoothly, and the wire belt loop is complete and fully functional, retaining much of its blued finish as well. The rivet that retains the belt loop is slightly loose, allowing the swivel to move slightly more than when it was new. Both the throat and hanger show some scattered oxidation and surface roughness as well as some pinpricking. The reverse of the scabbard is weakly marked, below the steel throat, R. I. A. / 190? / H.E.K. The “H.E.K.” mark is the mark of Rock Island Arsenal civilian inspector Henry E. Kelsey, who inspected a wide variety of accouterments at that facility during the first two decades of the 20th century. The last number in the date is not legible, but at some angles with the right light appear to be an 8, indicating 1908 production.

Overall this is an extremely nice example of a pre-World War I US M1905 Bayonet with the correct, Type II scabbard. These bright blade, blued ricasso M1905 bayonets are extremely difficult to find, in any condition and this one is a real peach. Finding one that is essentially untouched, and this crisp is very rare. Early 1905 bayonets and scabbards are getting harder to find every day. This is a very nice set that will be a great addition to any collection. This set will be a particularly wonderful addition to your pre-World War I US Model 1903 Rifle display.