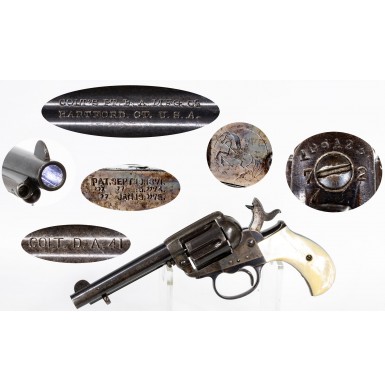 The Model 1877 was not the modern double action, swing out cylinder handgun that comes to mind when one thinks of double action revolver today. Instead, the 1877 was essentially a scaled down Single Action Army with a fixed six-shot fluted cylinder retained by a conventional arbor pin that was still loaded and unloaded through a gate in the right side of the frame, and which introduced a compact and somewhat elegant “bird’s head” grip that was both comfortable and made the guns easier to conceal in a pocket. The primary differences from the larger Single Action Army were the double action mechanism, the placement fo the locking notches for the cylinder on the rear face of the cylinder like the New Line series of handguns and the lower power cartridges the guns were chambered for. The initial production calibers for the revolvers were .38 Colt and .41 Colt, with both cartridges available in a “long” and “short” variant, and with .32 Colt added to the product line in 1888. This caliber was dropped circa 1900, with only about 200 of the .32 caliber guns being produced during that time frame. The guns are known today by their nicknames which were introduced by one of Colt’s largest distributors, Benjamin Kittredge of Cincinnati, OH. In period advertising, Kittredge referred to the .38 caliber variant as the “Lightning”, the .41 caliber version as the “Thunderer”. The .32 caliber version received the moniker “Rainmaker”. Like most Colt handguns of the period there were two standard finishes, blued barrels and cylinders with color casehardened frames and full nickel finish. In both cases the screws and small parts were typically fire blued and the hammers were polished bright on the sides with the top and spur blued as well. Early production guns had checkered two-piece rosewood grips, but by about 1880 checkered hard rubber grips were standard. Like any Colt handgun of the period, special order finishes and grips were available at extra cost, with ivory and mother of pearl being the most popular grip upgrades and finish upgrades being limited only by the buyer’s imagination and budget. Engraving as well as grip carvings were also available upgrades. Like the numerous finish options, a number of barrel lengths were available as well. The standard lengths ran from 1 ½” to as long as 10”, typically in ½” or sometimes 1” increments. Guns with barrels shorter than 4 ½” were produced without an ejector, although some of the guns with longer barrels were special ordered without ejectors as well. Some of the rarest barrel lengths are 1 ½”, 2” and 6” without the ejector rod and any barrel length of 7” or longer. The guns were typically marked with a two-line barrel address regardless of their length and the left side of the frame was marked with a three-date in three-line patent mark and a Rampant Colt in a circle logo. Caliber markings were applied to the left side of the barrels of most guns from about 1880 onward. For the first few years these markings were acid etched, but by the latter part of the 1880s the markings were being applied with a roll die. Those guns not marked on the barrel were normally marked with the caliber on the left side triggerguard web. The guns were very successful for Colt, and during their 33-year production run from 1877 to 1909 some 166,849 were manufactured. The Model 1877 also provided the springboard for the launch of the larger framed Model 1878 “Frontier” the following year, but the 1878 was not nearly as successful with only about 51,000 being produced during its production run, despite being offered in some of the most popular handgun calibers like .44-40, .38-40 and .45 Colt. Some of the luminaries known to have owned or carried Colt 1877 revolvers include the infamous “Billy the Kid” who was supposedly carrying a Lightning the night he was killed by Pat Garrett, John Wesley Harding who was known to prefer a Thunderer and the artist Frederic Remington who also owned a Thunderer that he purchased in March of 1895.

Offered here is a FINE condition example of a Colt Model 1877 “Thunderer” Revolver. As the name indicates, the revolver is chambered for the .41 Colt cartridge. The gun is serial number 106123 and was produced in 1897. The gun has a blued and color casehardened finish and has a wonderful period pair of smooth mother of pearl grips that fit perfectly but are probably not factory. More than likely the grips were added by the gun’s retailer when it was sold. The gun has the standard markings, including the two-line barrel address which reads

and is followed by the Rampant Colt logo in a circle. The left side of the barrel is roll marked in a single line:

The revolver remains in about FINE overall condition. It retains about 40% of the original blue on the barrel which shows thinning and flaking and is mixing with a lovely plum brown patina. The plum patina makes the barrel appear to retain more finish than it really does. The most obvious loss is along the ejector rod housing where the worn finish has more of a pewter gray patina, as well as on the opposite side of the barrel. This clearly appears to be holster wear. The cylinder retains some flecked traces of blue with the same attractive plum patina found on much of the barrel. The triggerguard retains about 30%+ of its bright blue with moderate flaked loss and the same plum patina. The backstrap retains only traces of blue but again shows the same lovely plum coloration. The frame retains about 30% of its original vivid case coloring, primarily in the protected areas around the recoil shield and the forward portion of the frame. The balance of the frame has faded and dulled to a mottled smoky gray patina with some weak coloration. All of the markings on the gun remain clear and crisp, and an additional marking is present on bottom of the triggerguard in addition to the serial number, with the stamped number 72 separated by the forward triggerguard screw with a second 7 under the first one. It is not clear what this marking means. The metal of the gun is almost entirely smooth with some freckled oxidation and some small flecks of minor surface roughness here and there but is for all practical purposes free of pitting. There is some scattered oxidized roughness around the face of the cylinder and at the fronts of a couple of the cylinder flutes as well. The revolver is mechanically excellent and operates exactly as it should, timing, indexing, and locking up as it should. The bore of the revolver is in about FINE condition as well. It is mostly bright with some strong blued finish, crisp rifling and only some lightly scattered oxidation and some lightly scattered pitting. The two-piece mother of pearl grips are very attractive with some lovely luminescence and rainbow coloration. The show nice age and some age-related discoloration and fit wonderfully. They are solid and free of any breaks or repairs and show only a couple of the most minute nicks along the rear edge of the left grip along the gripstrap. The grips really contrast wonderfully with the balance of the gun and make the overall appearance of the revolver quite stunning.

Overall, this is a really attractive late 19th century production Colt Model 1877 “Thunderer” Revolver. The gun remains in very nice condition with some lovely finish and a great set of old mother of pearl grips. The Colt 1877 revolvers are notorious for mechanical issues and this gun works perfectly and is in solid mechanical condition. This would be a fine addition to any collection of Colt revolvers or handguns of the American West, even if this gun was made at a time when the west was no longer “wild”.