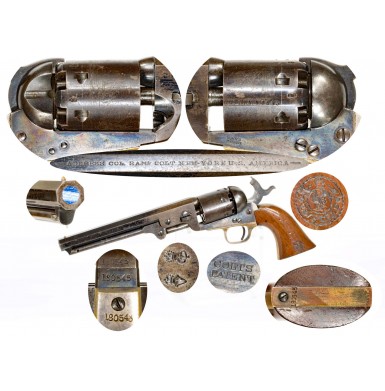 The Colt Model 1851 “Navy” Revolver has typically been thought of a distinctly American pistol, with many of the revolvers seeing service with both the US and CS military during the Civil War, as well as seeing significant civilian service on the frontier. However, most collectors are unaware that the Colt Model 1851 Revolver was the first revolver to be accepted into service and issued by the British military. With the advent of the Crimean War, and the sudden need for modern repeating handguns in the field, the British Ordnance Department placed orders for a total of 23,700 Colt’s “Navy” pistols. These revolvers were delivered between March of 1854 and February of 1856. While many of these were delivered from Colt’s London production facility, additional revolvers were delivered from his US manufactory as well. Of these revolvers, 9,600 were issued to the Royal Navy, 5,000 were issued to the army in the Crimea and 9,000 remained in store at the Tower of London as of February 1856.

This small group of Colt revolvers was initially identified by author and researcher Nathan Swayze, who authored the seminal book ’51 Colt Navies – The Model 1851 Colt Navy, Its Variations & Markings in 1967. According to Swayze’s survey and research, there were sixteen known examples of Colt M1851 Navy revolvers that were British proved and marked with the Enfield storekeepers mark on their left grip. All of these revolvers were within the serial number range of 179487 and 188258. This places the production of all of these guns between late 1864 and early 1866; long after the Crimean War had concluded and the British had officially adopted revolvers of British manufacture for service. Swayze did significant research on the matter and corresponded with officials at The Tower of London, The British War Office Inspectorate of Armaments (RSAF) and Master General of the Ordnance Inspectorates (RSAF) all of which could provide no official explanation for these late production Colt Navy revolvers with the RSAF mark. In fact, the best these officials could do was to provide contradictory theories as to the origin of these revolvers. However, British revolver researchers and authors W.H.J. Chamberlain & A.F.W. Taylerson may have inadvertently provided an explanation to this conundrum.

The Enfield marked Colt Model 1851 Navy Revolver offered here is a textbook example of one of these scarce pistols, as described in Swayze’s book. The gun is serial number 180545 placing its production in very early 1865. The revolver is all matching, including the wedge, with the exception of the cylinder arbor, which is numbered 0505, which could well be a factory error. It is also worth noting that of the sixteen examples noted by Swayze, several had some mismatched numbers. It is not clear if that was the result of RSAF rebuilding and repair or no. This revolver has an unnumbered loading lever, which is also interesting, as the only other example of one of these very rare guns I have ever owned (more than a decade ago) also had an unnumbered loading lever. The condition, finish and patina of the loading lever matches the rest of the gun perfectly and it appears to have been with the pistol all of its service life.

The gun is in about FINE condition. The barrel retains about 60%+ of its original bright blued finish, which has flaked and worn. The majority of the loss is at the web section near the frame, where the flaked blue has exposed the metal, which has taken on a smooth, plum brown patina. There is also some high edge loss and wear along the barrel, and of course the three lower flats of the octagonal barrel retains the largest amount of bright factory blue. The barrel retains extremely sharp edges and has a NEAR FINE bore with crisp rifling and some scattered light pitting. The top barrel flat is clearly marked:

The frame retains 70%+ vivid casehardened coloring, which has faded and dulled slightly, but still retains wonderful coloring. The lower left side of the frame is clearly stamped in two lines: COLTS / PATENT. The loading lever retains about 50%+ vivid case coloring, mostly on the web at the hinge and the hammer retains about 40% vivid case color, which has a duller, muted overall appearance. The cylinder retains some traces of bright blue, possibly as much as 10%, primarily  in protected areas. It retains the large majority of the roll-engraved naval engagement scene, probably around 80%+. The small areas of scene loss are due to a couple of patches of minor surface oxidation. A similar small patch is present on the recoil shield on the reverse of the frame, suggesting that these areas developed while the revolver spent a long time laying on fabric. The COLT’S PATENT No marking and the last four digits of the serial number, 0545, remain extremely sharp and clear. The front edge of the cylinder still retains the complete and fully legible marking: ENGAGED 16 MAY 1843. The rear of the cylinder retains none of the original stop pins, only the worn lumps showing where they originally were. The brass grip strap and triggerguard retain some strong traces of original silver plating, with the strongest on the triggerguard. The left rear web of the triggerguard has the usual 36 CAL marking. The exposed brass has a lovely, untouched patina that ranges from a rich golden butterscotch on the front strap to a deep ocher on the backstrap. The action of the pistol is excellent and remains very crisp. The revolver functions perfectly with fine timing, indexing and very tight lockup. The reverse of the barrel web, forward of the cylinder, is stamped with a pair of standard London commercial proof marks, as would be expected on a pistol imported into England. Alternating London commercial proof and view marks are present on the rear edge of the cylinder between the chambers. The one-piece wood grip is in about FINEcondition as well. The grip retains most of its original varnished finish and is numbered to the gun in the gripstrap cut out on their interior. The left side of the grip shows a deeply stamped “circle-in a-circle” RSAF Enfield storekeepers’ cartouche that indicates that the pistol was inspected and received into British military service at Enfield. The exterior ring has a (CROWN) at the top, flanked by the letters R and M respectively and with the word ENFIELD at the bottom of the ring. This almost certainly indicates Royal Manufactory at Enfield (Lock), also known as the Royal Small Arms Factory (RSAF). The center circle has a (CROWN) / GS / M in its center. The meaning of this second markings is not clear, and according to the numerous letters that Swayze sent to various officials in the British government, in the arsenal system and at Enfield, no consensus was reached as to what they mean. The stamp is so deeply struck it is almost hard to read, but only from the wood deformation that the stamp itself created. While the grip does show a number of scattered minor bumps, dings and marks from handling and service, it remains extremely crisp.