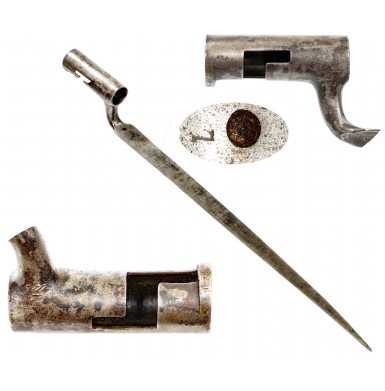 This is a very interesting, somewhat crudely made example of what appears to be an early Federal Period American Socket Bayonet. The heavy socket bayonet has an early pattern flat, tapered blade without any fuller. The socket is slightly longer than typical socket of the 1800-1810 period and has an applied bridge at its rear that is brazed over the mortise opening at the rear. However, the standard three-step, Z-shaped mortise of the period is present. The mortise is cut for a top mounted bayonet lug. The blade is secured to the socket by a short, thick shank. The blade has only two marks, a deep round touch mark that is roughly ¼” in diameter and a small L or 7 between the shank and the mark. The punch mark is likely a hardness test, while the other mark is probably some form of a maker’s mark. The relevant dimensions of the bayonet are as follows:

The three-step mortise starts with a .3” wide, .85” long first step, followed by a .48” wide and .75” long rotational second step which terminates  in .25” wide, .55” long final step that terminates 1.3” from the face of the socket. The fact that the bayonet has an applied bridge, and that the overall dimensions are not in keeping with circa 1798 contract bayonets, it is quite likely that the bayonet pre-dates that period, possibly from the 1780s or 1790s, with the bridge applied later, circa 1807-1810, when bridges started to become standard on US military socket bayonets. At that time, many older bayonets were upgraded by adding these brazed-on bridges.

The bayonet is in about VERY GOOD condition. The metal has a mostly dull pewter gray patina with scattered areas of darker age discoloration and oxidation. Some of the discoloration is only flecks, but in some cases,  it is larger patches of oxidation. The back edge of the blade and its spine show significant discoloration and heavier oxidation. The bayonet shows scattered bumps, dings and mars in the metal, primarily along the spine of the blade, at the shank and on the socket. There is a very apparent forging flaw in the face of the blade, about 4” from the shank and roughly 4 ¾” in length. The metal is partly smooth, with scattered surface oxidation, some scattered patches of roughness and surface crud and some scattered pitting that ranges from pinpricking to some more moderate pitting scattered along the back edge of the blade and on the socket. The socket itself remains mostly round, though it is difficult to determine if the lack of uniformity to the socket bore is the result of wear, damage or simply the crude manufacturing that is present throughout the bayonet.

Overall, this is a solid example of an Early American Federal Period Socket Bayonet. The bayonet remains in nice, complete condition, showing real age and use but no real abuse. It is difficult to know what this bayonet was originally intended to fit, as it would appear to have been capable of fitting early production US 1795 muskets, some of the 1798 contract arms or even earlier American used and repaired French pattern arms. This will be a nice addition to any collection of pre-War of 1812 American Socket bayonets and might even fit an early musket in your collection, which is one of the reasons the dimensions are provided in the description.