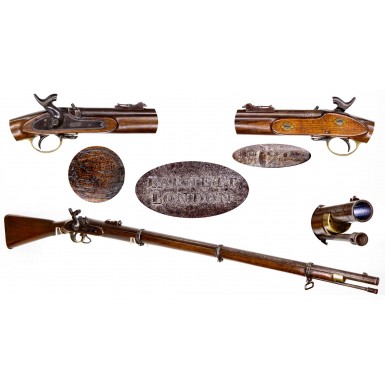 During the Civil War years, the Barnetts operated at both their 134 Minories address, which had been established in 1833, and at Brewhouse Lane, Wapping, where they operated from approximately 1860 to 1874. In the typical fashion of the old time gunmakers in England, Barnett relied heavily on a variety of contractors to produce piecework parts, which were subsequently assembled into complete arms in the Barnett shop. While Barnett could clearly manufacture entire guns in house, and often did, it was sometimes more expedient and cost effective to sub-contract for major components when large contracts were received and had to be filled quickly. Many of the orders received from the Confederacy during the course of the American Civil War were just these types of orders, which had to be completed as quickly as possible. It is not uncommon to disassemble a Pattern 1853 rifle musket with a Barnett marked lock, only to discover that the gun may have been assembled by Barnett but that few, if any, of the components were actually produced by Barnett. These guns often bear Confederate viewers marks such as the small CH/1 in circle, or one of the lesser known Confederate inspection marks found on Barnet arms like a small script or block JS in a circle or a small SL in a circle. All of these marks are found on the comb of the stock, forward of the buttplate tang, and are approximately the same size.

Until recently the CH/1 mark was one of the more obscure Confederate inspection marks. Initially this mark was thought to refer to Confederate purchasing agent Caleb Huse, but documents contained in the McRae papers clearly indicate that the mark really refers to arms viewers (inspectors) Isaac Curtis & Charles Hughes who were hired by S. Isaac Campbell & Company to inspect arms that had been purchased for the Confederacy. Contained within the McRae Papers is an inspection certification dated September 26, 1861, on which Isaac Curtis attests to his viewing of 75 “2nd Hand” Pattern 1851 Minié Rifles. Clearly the viewers inspected many more arms than those, and this mark is known on Confederate imported Pattern 1853 Rifle Muskets as well as Brunswick rifles with Confederate provenance. The CH/1 mark is most often encountered on British arms made by (or sold by) Barnett. Another invoice within the McRae papers was sent to John Edward Barnett & Sons on May 26, 1862 for the sum of £46.17s.2d to pay for the viewing services of “Curtis & Hughes” who had inspected guns delivered by Barnett. It appears that Curtis & Hughes also did contract inspections for firms other than Barnett, but their mark is most often associated with Barnett made or delivered arms. Based upon extant examples, it appears that the CH/1 inspection mark was only used during the late summer/fall of 1861 through mid-1862, and this is reinforced by the fact that in 1863 Isaac Curtis himself ran the blockade, taking a position at the Confederate arsenal in Fayetteville, NC.

Even those Barnett arms devoid of documented Confederate inspection marks are often Confederate related arms. Barnett delivered a number of guns, presumably to the Confederacy, that were assembled by other makers, but are marked BARNETT / LONDON in the wood, either on the stock flat opposite the lock or along the toe of the stock. These were clearly guns purchased by Barnett to get a nearly finished order “out the door” as expeditiously as possible. Sometimes the presence of a previously undocumented mark on a Barnett Enfield suggests Confederate use as well and these marks like the script or block JS, and block or script SL in a circle in the same location as the CH/1 mark may refer to speculative arms purchases.

This Confederate Purchased Barnett Pattern 1853 Enfield Rifle Musket is marked with a CH/1 within a circle on the top of the stock comb, forward of the buttplate tang. This is the location that the “furnishers mark” is typically found on guns that were part of the Sinclair, Hamilton & Company “2nd Contract” with the Confederate central government which were the engraved inventory numbered, JS/Anchor marked guns. It is also where other CS inspection marks like the 3rdcontract guns with a JS / {ANCHOR} or the {ANCHOR} / S inspection marks are found.

This Confederate Purchased CH/1 Marked Barnett Pattern 1853 Rifle Musket is in about NEAR VERY GOOD condition and shows the heavy wear typical of Confederate arms that saw significant service. The gun is clearly marked on the lock BARNETT / LONDON forward of the hammer, with no additional marks on the lock to the rear of the hammer. The gun was apparently assembled by Barnett but utilized a variety of contractor provided and even imported parts. The interior of the lock is marked J BRAZIER in an arc around the mainspring stud, indicating that the famous Wolverhampton based lock maker Joseph Brazier provided that component. That lock is additionally marked BARNETT over the mainspring, the location where the contractor who assembled the gun usually marked the lock. The initials GW are found in the lock as well and these are likely the initials of the “setter up”, the workman who actually assembled the gun. The upper edge of the lock plate has the file slash mating mark | |. This same marking is found on the necks of the lock mounting and breech plug tang screws as well as on the bottom of the barrel. The exterior of the barrel is marked at the breech with the three usual London commercial proofs; a Provisional Proof, a Definitive Proof and a Definitive View mark. These marks are weak due to flash pitting. The underside of the barrel is profusely marked as well. It bears the master contractor name BARNETT as well as a Barnett {CROWN}/B mark and the initials GW as found in the lock. The barrel is Belgian-made and has the script intertwined EL indicating Liège manufacture and the additional mark {CROWN}/GD, likely the marker’s mark of the Liège barrel maker. As the barrel does not bear Belgian proofs, it was probably imported as a “rough barrel”, which Barnett finished and proved in London prior to assembly. In some cases, both London and Birmingham contractors relied upon finished barrels from Liège, which would have Belgian proofs in addition to English proof marks.

As noted, the gun is well worn and used, typical of Confederate arms and overall, the gun remains in about NEAR VERYGOOD condition; but certainly Confederate “Very Good” condition. The gun appears to be 100% original to the period and correct in every way. The gun has no remaining finish and has a thickly oxidized brown patina over most of the metal surfaces. The metal has moderate amounts of surface crust and roughness over its surfaces, with at least some pitting distributed over all of the iron surfaces, and significant deep pitting around the breech and bolster area from percussion cap flash. The erosion in the metal and accompanying wood loss from “burn out” at the bolster suggests that the gun was likely fired thousands of times. This could indicate use both in battle and potentially in the post-war south helping to keep food on the table. The lock of the gun has a moderately oxidized plum brown with a slightly mottled appearance. It matches the balance of the gun perfectly. The markings on the lock remain clear and crisp. The lock remains mechanically functional but shows some internal damage. The half cock notch of the tumbler is chipped, so the hammer will not hold at half cock. The tip of the sear is chipped as well but will still hold securely at the full cock position. The gun retains its complete original rear sight, as well as the original combination musket front sight and socket bayonet lug. The gun retains both sling swivels as well, and both appear to be original, although the lower swivel is bent and cracked from hard use. An original full-length ramrod is in the channel under the barrel and retains good threads at the end. The original screw retention “doughnuts” are present on all three of the barrel band tension screws, small parts that are often missing from Enfields today. The brass furniture has a medium mellow golden patina that is very attractive. The bore of the gun rates about GOOD. The bore is also heavily oxidized, like the exterior of the gun, and shows evenly distributed light to moderate pitting with visible (if weak) rifling along its entire length. The stock is in about NEAR VERY GOOD condition and shows wear and use commensurate with the metal of the gun. The stock was lightly sanded as some point as the sharp edges are soft and slightly rounded. This has also left the CH/1 mark on the stock comb weak and only partially legible. The stock is full-length, solid and free of any breaks or repairs. The stock does show scattered bumps, dings and dents in the wood, as would be expected from a well-used 150-year-old military musket. There is also some wood loss from burn out behind the bolster, but again, this wear is commensurate with the pitting on the metal in this area and would be expected.

Overall, is a very attractive, attic condition, essentially untouched example of a Civil War era Barnett produced Pattern 1853 Enfield Rifle Musket that bears the CH/1 Confederate inspection mark of Curtis & Hughes. The gun has the great eye appeal of a well-used southern purchased Civil War musket. Other than wiping the gun down with an oily rag to keep the metal from further oxidation or deterioration and taking the gun apart to confirm mating and maker marks, it remains in the same condition as it has likely been in for decades. For a collector looking for a classic example of a Confederate Enfield for their Civil War collection this is a nice opportunity to obtain a solid southern gun that is complete and correct and is very affordably priced.