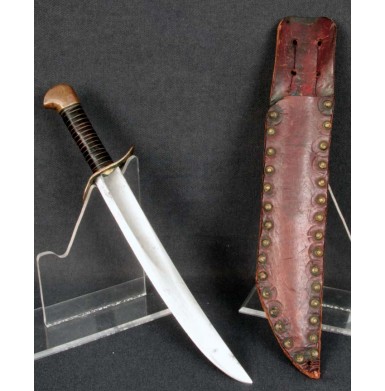 This is one of the coolest and most interesting World War II era “Theater Knives’ I have ever had the opportunity to offer. It is especially interesting to me, as it combines my love of Civil War era weapons and WWII militaria into a single item. This large and rather intimidating combat knife was crafter from a US Civil War era M-1860 Naval Cutlass. The knife was made from the forward portion of the cutlass blade, is 9 5/8” in length, and retains a little over 4 1/2" of the original cutlass fuller. The overall length of the knife, including the hilt, is just under 13 3/4” in length. The USN M-1860 cutlass was the last of the 19th Century small arms to see service with the US Navy, and they were still in limited service in the arms lockers of some World War II US Navy ships. In fact a WWII US Navy veteran sold a M-1860 cutlass to a friend of mine a few years ago and recalled that he had used the cutlass to fend off sharks for several hours after his ship, the destroyer USS Monssen (DD-436) was sunk in the Pacific! The Monssen was sunk in “Ironbottom Sound” after the November 12-13, 1942 battle of Guadalcanal. This sailor was the last man out of the Number 4 turret on the ship. This bit of first person, anecdotal evidence clearly illustrates that these cutlasses saw at least limited service during WWII. Fighting knives were often manufactured in the machine shops onboard US Navy ships, and this knife was almost certainly made in the Pacific Theater by a Navy machinist. In fact, photos exist of Marines on Guadalcanal carrying theater knives made out of M-1917 Naval Cutlasses, proving that such makeshift sword-knives saw real service in combat situations.

This very attractive fighting knife has a heavy brass pommel cap and a curved, S-shaped brass cross guard. The hilt is made from leather washers with brass spacers, and the tang of the knife is cast right into the brass hilt, with some minor brass flow present around the ricasso. The brass has really gorgeous, completely untouched dark ochre patina, and also has some scattered patches of lovely green verdigris where the brass has been in contact with the leather scabbard. The deep reddish tone of the brass is indicative of a very high copper content in the alloy. The scabbard is a classic theater made leather scabbard. It is made from heavy brown leather, and the front and back are joined with 30 hand hammered brass rivets. The riveted scabbard is a nice "tip of the hat" to the original Civil War scabbard, which was also joined with rivets instead of stitching. The scabbard is cut for a 2 ““ wide belt. The tip of the scabbard has a small hole punched into it for a thong to use as a tie down on the wearers leg. The scabbard is clearly original to the knife and has been with it from the beginning. The knife is in VERY GOOD+ to NEAR FINE condition. The blade is a medium pewter color and shows normal wear and sharpening marks along the edge. The leather and brass washer hilt is in fine condition and shows nothing beyond some minor wear and handling marks from actual service.

Overall this is simply a really cool and great displaying example of a World War II, Pacific Theater combat knife that was almost certainly made on board a Navy ship and very likely saw use by a Marine infantryman, possibly on Guadalcanal. This will be a fantastic addition to any Theater Knife collection, and would be especially appropriate for a collection that centers on Marine Corps & Naval items. For a collector whose passions range from the Civil War through World War II, I can think of no better item to add to their edged weapons collection. This is one piece that is just plain neat!