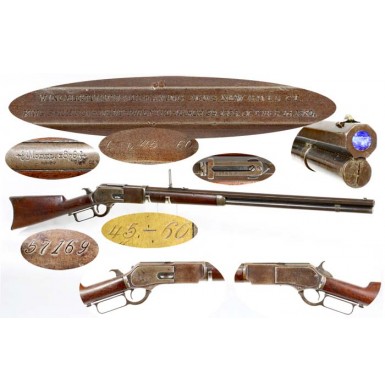 This is a very nice example of the Winchester Model 1876 rifle, also known during the period as the Centennial Rifle since it was introduced during the great Centennial Exhibition (the first US held “World’s Fair”) in Philadelphia on the 100th anniversary of American Independence. The rifle was Winchester’s answer to the complaint that the earlier Model 1866 and Model 1873 lever action rifles were not powerful enough for serious use when hunting big game or for long range shooting. At the time, the high-power, long-range cartridge that was the standard for frontier use in America was the .45-70 Government cartridge. This large .45 caliber cartridge was the standard US military cartridge and was one of the most popular chamberings for the Sharps rifles of the period. Since the cartridge was so long, Winchester could not easily adapt the Model 1873’s toggle link action to accept the cartridge. However, they did develop a shorter, bottlenecked cartridge, the .45-75 that gave comparable ballistics to the .45-70 and could be fit into the enlarged M1873 action that became the basis for the M1876. Beginning in 1876, Winchester produced a total of 63,871 Model 1876 rifles, carbines and muskets, with the model being discontinued in 1897. These relatively low production numbers for a Winchester rifle make it the least common of all the Winchester lever action rifles of the pre-1900 era. In 1879, Winchester added the .45-60 and .50-95 calibers to the list of chamberings for the M1876 and eventually the .40-60 was added to the optional chamberings as well. The Model 1876 was the first really successful big-bore lever action rifle to see use on the Great Plains and was never truly challenged for supremacy, even by competitors like the Colt Lighting Large Frame rifle, the Whitney-Kennedy and the Marlin 1881. Only the agreement between John Browning and Winchester to produce Browning designed lever action rifles in 1885 began the demise of the 1876 as the premier large game lever gun of the western frontier. The Model 1876 found favor and use among a diverse array of historic characters. President Theodore “Teddy” Roosevelt was particularly fond of the rifle, and such notable outlaws as Johnny Ringo and Charlie Bowdre (Lincoln County War “ Billy The Kid ally) also put the Model 1876 to use. The movie version of Tom Horn with Steve McQueen also featured an 1876 as Horn’s gun of choice, although that was a fictional account and the killing for which Horn was hung for was done with a Winchester Model 1894 in 30-30.

The Winchester Model 1876 offered here is a Very Good+ example of the big bore frontier lever action rifle. The gun is a classic, standard production example with a blued finish, standard sights and trigger, smooth straight-gripped walnut stock with crescent buttplate and a 28” octagonal barrel. The gun is serial number 57169, indicating that it was manufactured circa 1885. An email records check of the Winchester Factory Records that are maintained at the Buffalo Bill Center of the West in Cody, WY show that this rifle was received in the warehouse on February 22, 1887. The rifle was shipped on August 9, 1889 on order #119. The lag time between the application of a serial number to the frame, the final production of the gun and its eventual shipment from Winchester is not uncommon. The records search reveals that the rifle was chambered for the .45-60 cartridge, was shipped with a 26” octagonal barrel and had a plain trigger. Another, interesting fact was also revealed. The gun was returned to the factory in February 1894 to have the barrel changed from a 26” barrel to a 28” barrel. The gun was back in the warehouse on February 27 and shipped back to its sender on February 28, 1894. The gun was noted as being returned by ECMA Co. No further information to determine who ECMA Co. was (or is) is provided in the records search. Researching that could prove interesting and fruitful.

As noted in the factory records search email, the gun is chambered in .45-60. That designation is marked on the bottom of the brass cartridge lifter and on the top of the barrel at the receiver junction. The barrel is clearly marked with the usual Winchester manufacturing and patent information and the model marking is clearly marked on the receiver tang. The tang is simply marked: { MODEL 1876 }. The barrel reads in two lines:

The rifle has the factory replaced 28” barrel noted in the records search and retains a fine bore with sharp rifling. The original model marked 1876 long-range, flip up rear sight is in place in the dovetail on the barrel, and is graduated to 1000 yards. The original dovetailed front sight is in place at the end of the barrel as well. The gun falls in the 3rd Model serial number range (from about 30,000 to the end of production) and has the receiver dust cover mounted on integral frame rails. The dust cover has a plain top and serrated edges for gripping at its rear. The action of the rifle remains crisp, the gun is in excellent mechanical condition and functions perfectly. The metal of the rifle is in very good condition and remains mostly crisp and sharp throughout. The barrel and magazine tube retain some strong patches of blue in the protected areas where the two parts meet, with the two parts retaining at least 10% of their bright blue overall, possibly more. The balance of the barrel and magazine tube have a slightly mottled and oxidized plum brown patina. The metal is mostly smooth, with some scattered pinpricking and some tiny areas of light pitting, mostly around the muzzle area. The barrel also shows some scattered minor impact marks from handling and use. The receiver retains only minute traces of original blue on the right side with the loading gate retaining about 20%+ faded and dulled blue. The left side retains about 10%+ original bright blue. The balance of the metal on both sides of the receiver show a lightly oxidized plum brown patina with the left side showing some light pitting and some evenly distributed pinpricking on both sides. The hammer retains about 20%+ darkened case colors and the lever retains about the same amount of case coloring as well, with some fading. The standard crescent buttplate retains no finish, with an oxidized brownish patina and some scattered mottled age staining. The brass butt trap door is present in the buttstock for the storage of the cleaning rod and functions as it should, however the rods are missing. Several of the screws in the gun show some minor slot wear, but in general they are not abused. The oil-finished wood is in VERY GOOD+ condition as well. The buttstock shows moderately scattered bumps, dings, handling marks and some minor surface mars. All the marks of a one would expect to find on a 130-year-old working rifle. The forend shows the expected scattered minor bumps and dings.

Overall this is a very attractive Model 1876 rifle. Many of these rifles saw heavy frontier use and they are often found in rather rough condition. This rifle is much nicer than many of the beaters found on the market these days but is still priced where it might be a good acquisition for a shooter or Cowboy Action side matches. This would be a nice addition to any antique arms collection as an attractive, no excuses frontier large bore Winchester lever gun.