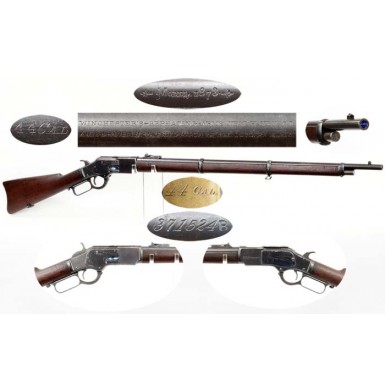 The Winchester Model 1873 is often referred to as “the gun that won the west”, and while the huge numbers produced and the overall popularity of the model in the American West may suggest there is some truth in that statement, it is in all reality hyperbole. Introduced in 1873, the Model 1873 was a significant improvement on the earlier Winchester Model 1866. The primary improvements revolved around the introduction of a reloadable centerfire cartridge (the Winchester .44 Center Fire, better known as the .44-40 or the .44 WCF) and an iron (later steel) frame and provided greater strength than the M-1873s brass framed predecessor. The Model 1873 remained in production for just under a half century, from 1873 to 1919, and during that time some 720,610 arms were produced in a dizzying array of configurations and variations. However, in simple terms the gun was available in carbine, rifle and musket models, with the “standard” barrel lengths being 20”, 24” and 30” respectively, with full length magazines standard on all models. Of course, custom barrel lengths, as well as custom magazine lengths, sights, features and finishes were always available at additional cost. The Model 1873 went through three major “model” improvements during its lifetime, designated by collectors as 1st Model, 2nd Model and 3rd Model. Most of these changes were relatively minor in terms of the actual operation and functionality of the weapons, with small manufacturing changes to the lever, trigger and hammer mounting, dust cover and dust cover rails being typical of the improvements. Detailed analysis of these modifications can be found in the exhaustive study, The Winchester Book by George Madis. From a collector standpoint, more important evolutionary changes were the introduction of new calibers, including .38-40 (1879) and .32-20 (1882). Slightly less than 20,000 M-1873s were also produced in .22 RF. Despite the overwhelming commercial success of the Model 1873, it was military the possibility of contracts that had actually driven Winchester to develop the model. An experimental US military trials rifle, produced by Winchester in 1871 had evolved into the Model 1873, and well into the twilight of the model’s lifetime, Winchester continued to offer a militarized version of the M-1873. The “Musket” version of the Model 1873 came standard with a 30” round barrel and a 27” magazine tube which were secured to the forend with three barrel bands. The musket was also equipped with a combination front sight/bayonet stud to accept an angular socket bayonet. Sling swivels were also provided, one located on the upper barrel band and one in the toe of the stock. Although Winchester doggedly attempted to secure US military contracts for their design, it was universally felt within the US military that the .44-40 cartridge was underpowered and not suitable for military use. However, a number of foreign countries felt that the firepower of the Model 1873 overcame any issues with cartridge performance, and Winchester found a small market for their musket overseas. The greatest popularity for the Model 1873 Musket was found in South American countries, where the guns were acquired by government and rebel forces alike during the latter part of the 19th and early 20th centuries, as many of these newly independent countries dealt with internal power struggles. Today, most Model 1873 Muskets found on the collector market can trace their heritage to the various South American insurrections, as American importers repatriated a number of muskets from Nicaragua and Argentina during the 1950s and 1960s. As the production of Winchester Model 1873 Muskets only represented about 5% of all Model 1873 production (about 36,000 guns), and most were sold to foreign customers, the Model 1873 Musket can be “quite rare” according to author George Madis.

Offered here is a FINE condition example of a 3rd Model Winchester M-1873 Musket. The gun is in the usual musket configuration with 30” round barrel, 27” magazine, sling swivels, later model musket rear sight, and front sight/bayonet lug. The musket is serial number 371524, placing its production in 1891. The serial number is stamped into the rear of the trigger tang in italics numbers, followed by the Winchester factory work mark B, which is not part of the serial number. The bottom of the brass cartridge lifter is stamped 44 CAL. in italics, and the top of the barrel, just in front of the receive is stamped 44 CAL as well. The upper tang is marked with the standard mid-production MODEL 1873 mark.The top of the barrel is marked with the usual mid-production two-line address and patent information and reads:

The 3rd Model Winchester M-1873 Musket offered here is in about FINE condition overall. The gun retains about 60%+ of its original blued finish. Much of the finish has dulled and faded and mixed with a lightly oxidized plum brown patina, giving the gun the appearance of more finish than it actually retains. The receiver retains the majority of its original bright blue, with most of the loss due to high edge wear, some fading from handling and use and a number of surface scratches on both sides of the receiver. The scratches appear to be the result of metal on metal wear, possibly from poor packing during transportationA and shipping. As most of the M-1873 Muskets found in the United States today were repatriated from South America during the 1950s and 1960s, these scratches may date to the period of their re-importation. Most of the mars are only surface finish marks, but a couple are actual scratches into the metal of the receiver. There are also some dents and dings in the receiver, again these are likely the result of poor packing for transport. The loading gate retains the large majority of its original brilliant fire blued finish and is quite striking. The lever and hammer both retain strong amounts of their case-hardened finish, around 40% on each, with the finish fading and dulling from age and use. The barrel retains a nice mixture of original dulling and fading blue, along with a mostly smooth plum brown patina. Flecks of light surface oxidation are scattered along the barrel, along with some lightly scattered pinpricking. Some small patches of light pitting and some minor surface roughness are present as well. The mountings, fittings and bands retain much of their original blue as well, but also show fading, dulling and wear consistent with the balance of the gun, along with some lightly scattered pinpricking and flecks of surface oxidation. The brass cartridge lifter has a pleasing, mellow mustard patina. The bore of the gun is in about GOOD+ to NEAR VERY GOOD condition and shows light to moderately scattered pitting along its length. The rifling remains crisp, and the bore is a mixture of bright metal with some patches of darker oxidation. The original musket patter rear sight is in place, as is the front sight/bayonet lug. Both original sling swivels are in place as well. The original 3rd model dust cover and integral rails are in place on the top of the receiver and the dust cover operates smoothly. The original trapdoor that conceals the recess in the buttstock where the cleaning rods are stored is in place and functional, but the rods are missing. The butt plate shows more wear and finish loss than the balance of the gun and has a mostly greyish patina mixed with surface oxidation and discoloration and traces of original blue. The musket is mechanically FINE and remains in sound condition. The action works smoothly, with the lever, bolt and lifter all working exactly as they should. The stock and forend are in about VERY GOOD+ to NEAR FINE condition. They are both solid and complete and free of any breaks, cracks or repairs. Both show numerous minor bumps, dings and mars from storage, use and transport, but no serious abuse. Neither shows any indication of having been sanded or refinished in any way. The wood to metal fit remains quite good throughout, and the condition of the stock and forend match the balance of the musket well.

Overall this is a really solid and rather attractive example of a 3rd Model Winchester M-1873 Musket. With the musket only representing 5% of total Model 1873 production, they are fairly rare in the greater scheme of 1873 collecting. Since the majority of the muskets were sold internationally, they are even harder to locate in the United States, as most never made it back to this country. Those that did were primarily returned from South America some 60 years ago, and many of those guns saw hard use in a tropical climate. This gun is hardly a mint example, but had most of its original finish and a very nice look to it. It has a good enough bore to shoot, is mechanically fine, but it not is such wonderful condition that you would not want to shoot it. This is a solid example worthy of addition to any collection. Whether your interest lays in military arms, lever action arms, or the evolution of firearms, a Winchester 1873 is a must have. This is a very solid, all original and correct example that you will be able to enjoy for years to come.