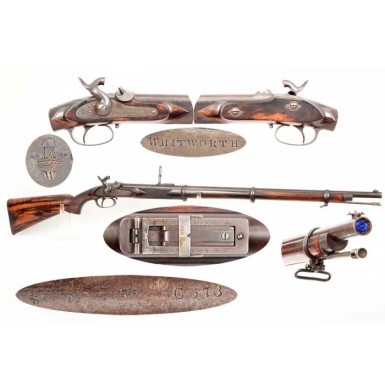 This Whitworth Match Rifle is in about FINE overall condition, and is a wonderful example of the high quality work that the Whitworth shop, and other English gunmakers produced when producing exceptional target rifles. The case hardened lock of the rifle is marked with the usual Whitworth logo, a (CROWN) / W to the rear of the hammer, and simply WHITWORTH on the lock forward of the hammer. The rifle has a 33” blued barrel secured to the stock with 3 Palmer Patent clamping barrel bands, and a screw through the tang of the breech plug. The breech is a uniquely shaped case hardened affair with a large relived cone seat (bolster) that resembles an espalier or spauldor from a knight’s suit of armor. The breech tang is surrounded by a metal plate on the top of the stock, which is engraved with vines in a loose scroll pattern. The bolster is similar to those used on Westley Richards’ percussion target rifles and his “monkey tail” series of breech loading percussion carbines and rifles. The metal plate is essentially the size and shape of the “monkey tail breech block, and suggest that the stock may have originally been cut to accommodate a “monkey tail” action. The top of the barrel, behind the rear sight is marked WHITWORTH’S PATENT, but is almost imperceptible. This appears to be from the barrel being polished prior to being finished (or refinished). This will be discussed in some further detail in a moment. The left breech bears the usual Birmingham commercial view, proof and definitive proof marks, which are separated by a pair of 52 gauge marks, indicated .451 caliber. The left breech also bears the Whitworth serial number C673. This number is also present under the barrel. There are no additional marks under the barrel, and the only additional marks inside the lock are the letter H. The rifle is equipped with a conventional, long range rear sight that is graduated to 1,200 yards on the right side, and in inches from 1” to 4” on the left, which probably has something to do with bullet drop, or may be a scale used for estimating distance. The front sight is a somewhat complicated affair that is adjustable for windage. The rifle has a 49 ½” overall length, and the checkered, pistol gripped stock has a 14” length of pull. The upper barrel band is equipped with a military style sling swivel, while the front of the triggerguard plate has only a small iron eyelet to accept the swiveling hook from an English sporting style sling. The stock is made of exceptional quality, highly figured walnut (likely Italian) that has large dark splotches of sapwood distributed through the grain. The wrist and forend are expertly and crisply checkered, and the stock has a lightly varnished finish. The lock is a very high-grade target lock, with a pivoting tumbler notch and an extremely fine and crisp trigger pull. The rifle is in about FINE condition and retains strong traces of its period blue finish on the exposed surface of the barrel, which has faded and dulled to blend with a smooth, plum-brown patina. The bottom of the barrel, where it has been protected by the stock, retains about 80% of its period rust blued finish. The finish on the barrel of the gun is a conundrum. It appears to be completely original and period, HOWEVER, the fact that the breech markings are light and the barrel marking is almost polished out suggest the barrel was refinished at some point in time. If it was refinished, it was almost certainly done in the 19th century, as there is no indication that it is in any way a modern finish. The breech of the barrel retains about 60%+ vivid case coloring, which appears absolutely original. The case hardened colors show some dulling and fading, but are still relatively vibrant. The lock retains about 70%+ vivid case hardened colors, with even more of the lovely vibrancy visible on the breech. The barrel bands all retain about 20%-30% of their blued finish, which has faded and oxidized, blending with a plum brown patina. All of the metal remains smooth and free of pitting. There is some lightly scattered oxidized freckling present along the length of the barrel, and some small patches of light surface oxidation present as well, most notably around the muzzle and front sight area of the rifle. The bore of the rifle is about VERY FINE condition and is bright and shiny with only some very lightly scattered pinpricking and minor oxidation along its entire length. The bore will probably clean to even better, and the beauty of the mechanical rifling is that even when a Whitworth bore is pitted, it will usually shoot better than the shooter can hold the rifle. The lock is mechanically EXCELLENT. The lock functions perfectly on all positions and remains in very crisp mechanical condition, with a high quality target trigger pull. The original military style ramrod is in place in the channel under the barrel and is full-length with good threads at the end. The stock remains in wonderful condition as well. It is full length, solid and free of any breaks or repairs. The stock shows only the scattered bumps and dings from handling, use and storage and shows no abuse at all.

As mentioned earlier, the configuration and finish of the rifle is a typical of most Whitworth assembled arms. After consulting with William Curtis in the UK, who has been leading the Whitworth Research Project for about 50 years, some theories about the origin of the gun can be formed. According to Mr. Curtis, this rifle was a new Whitworth rifle number in their database, which contains over 600 known Whitworth rifles. The serial number suggests that the barrel was manufactured in late 1862 or early 1863. What is unusual is that the balance of the gun bears no serial numbers, as is typical of Whitworth assembled arms. Mr. Curtis feels that the this barrel was probably part of a small lot of barrels put up for an expected American contract (either CS or US) that never materialized and the barrels remained unused and were eventually sold as surplus when Whitworth closed his company. The Whitworth Rifle Company operated in Manchester from 1860-1862, when it became the Manchester Ordnance & Rifle Company, and finally became the Whitworth Company LTD in 1865, closing in 1870. The first two incarnations of the gun company were located separately from Whitworth’s machine tool company, and were at 51 Sacksville Street in Manchester. In 1865, the final version of the arms company relocated to 44 Chorlton Street, where Whitworth also maintained his machine tool company. From 1865 to 1870 both manufacturing and sales were slow, leading to the closing of the business. Apparently, Whitworth did sell a few rifles after 1870, but these appear to be left over stock, or guns made from spare parts, put up by other makers. It is my belief that this target rifle was assembled c1870 from left over parts, and was most likely assembled by Westley Richards. The rifle appears to have been stocked in a stock that was originally rough cut to accept a Westley Richards “monkey tail” action, and clearly has a Westley Richards pattern breech and percussion cone seat. The engraved metal plate at the wrist is the way this cut out was covered. The fact that the barrel markings are weak suggests to me that the barrel was polished by Richards shop prior to being blued. This was probably because the barrel was about 7 years old at the time of assembly and was likely unfinished, in the white, and had lightly oxidized, requiring polishing prior to finishing. The lack of the usual Whitworth serial numbers on each part is proof to me that Whitworth’s shop did not assemble the gun. The upper band is one of the “bar on band” type bands with a hole for a steady pin. The hole was filled prior to finishing, and is barely visible from the exterior, but is visible on the interior of the band. This is another indication of using leftover “parts on hand”. I believe that the finish on the rifle is all original and period, circa 1870 when Westley Richards assembled it. According to Mr. Curtis, a handful of non-standard Whitworth rifles are known that all have provenance to New Zealand. This suggests that a small number of these rifles may have been put of for an order to New Zealand circa 1870, but there is no indication that this was any type of military order. No matter who ordered the rifle or why it was built, it is a very high quality and very attractive Whitworth target rifle with a wonderful bore.

Overall this is a wonderfully crisp example of a fairly rare British Whitworth Military Match Rifle. For most collectors a British military Whitworth rifle or a civilian Military Match Rifle is as close as they will ever get to owning the nearly mythical Confederate Whitworth. This is a wonderful displaying example that is in excellent mechanical condition with a wonderful bore that will probably shoot better than you can hold the gun. These military rifles don’t come up for sale often, and when they do, they often bring strong prices. This is a wonderful opportunity to own a really gorgeous Whitworth that will be as much at home in your collection or on the firing line, and at a very fair price.