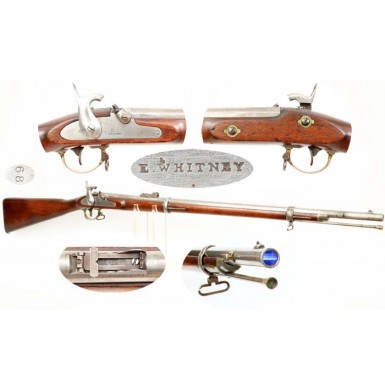 The Short Enfield Rifles produced by the Whitney Arms Company represent a unique series of rifles often classified with Whitney’s other “Good & Serviceable Arms”; arms loosely based upon current military patterns, but essentially handmade without interchangeable parts and not intended to pass a stringent Federal Government inspection. The guns were produced in small batches, in a variety of configurations and utilized a combination of obsolete, condemned, surplus and newly made parts. The Whitney Enfield Rifles were produced in at least four variants, with features such as the presence or absence of a patchbox, the type of rear sight and the type of bayonet lug being the primary differences. In general all of the rifles were loosely based upon the British P-1856 rifle with some influence from the US M-1855 rifle. Collectors have referred to the guns as “Enfields’ due to Whitney’s use of Pattern 1853 Type II Enfield style barrel bands on all of the guns. Unlike the P-1853 Type III Enfield barrel bands (aka Palmer Patent Clamping Bands) found on most Civil War era Enfields, the Type II bands were solid and were retained by band springs set into the stock. It appears that the Whitney Enfields used left over barrel bands Crimean War era P-1853 Enfield contract. Whitney had purchased a huge number of finished and unfinished Enfield parts at auction when Robbins & Lawrence went out of business. Period documents suggest that as many as 5,000 sets of Enfield pattern barrel bands were acquired by Whitney in various states of finishing at this time. The P-1853 Type II upper band was quite wide and early Whitney Enfields have this type of band. Later Whitney Enfields used a narrower upper band that was either newly made, or was repurposed from left over middle bands from the 3 band sets that he acquired. All of the Whitney Enfield pattern rifles had .58 caliber barrels that were between 32” and 33” in length. The gun had flat, flush-fit locks that were similar in appearance to Enfield pattern locks, but were a truly unique design. Like the Whitney M-1855 type rifle muskets, the barrels were often marked with an assembly number. These alphanumeric “serial numbers’ appear under the barrel on earlier and middle production guns and near the muzzle on the final production guns. The Type I and Type II rifles included an oval patch box in the obverse buttstock, while the Type III and Type IV rifles did not. The Type I did not accept a bayonet, while the Type II and Type III guns had a saber bayonet lug and the Type IV rifle had a front sight/lug for an angular socket bayonet. Type I rifles typically had fixed rear sights, Type II rifles typically had “long range”, long base ladder rear sights, while Type III rifles had either the “long range” or the Whitey “mid-range” rear sight and most Type IV rifles had “mid-range” rear sight. The typology of the rifles varies from source to source, but I am relying on George Moller’s “American Military Shoulder Arms, Volume III” as the most current and correct source of information. His categorization is slightly different from that found in Flayderman’s or Howard Madaus’ ground breaking research published in ARMAX, the journal of the Buffalo Bill Historical Center in Cody, Wyoming (now the Cody Firearms Museum). All of the Whitney “Short Enfield Rifles’ were produced between 1860 and 1861 and it is estimated that between 1,000 and 2,000 of all types of Whitney Enfield short rifles were produced. Many of the earlier production guns were sold to southern states, prior to the outbreaks of the American Civil War. In 1860, the state of Georgia acquired 250 “Whitney Short Enfield Rifles with Saber Bayonets”. Mississippi also ordered “Whitney Short Enfield Rifles with Saber Bayonets” in late 1860, 140 of which were delivered prior to the outbreak of hostilities. In January of 1861 South Carolina purchased 100 Whitney Short Enfields with oval brass patchboxes. As many as 496 “Whitney’s Short Enfield Rifles with Saber Bayonets” were purchased by the US government in the fall of 1861. These arms were acquired from New York based arms and militaria dealer Schuyler, Hartley & Graham. According to a number of sources, it appears that at least two companies of the 10th Rhode Island Infantry were armed with what Moller classifies as Type III Whitney Enfield Rifles.

This is a FINE condition example of the very scarce Whitney Type III Short Enfield Rifle. It is estimated that no more than 600 of these Type III rifles were produced, and probably less than that. The gun is in very crisp and sharp condition and appears to be 100% complete and correct in every way. The rifle is equipped with the Whitney “long range” long base tangent rear sight and has a saber bayonet lug on the right side of the barrel. The lug is numbered 22, the mating number for the bayonet that had been fit to the rifle. The rifle is an early production Type III that retains the long-range rear sight, but does not have the alphanumeric mark on top of the muzzle near the front sight. This mark starts to appear on the later Type III rifles with mid-range rear sights and remains present through Type IV production. The flush-fit, flat lock plate is crisply and clearly marked in a single horizontal line: E. WHITNEY along the lower edge, forward of the hammer. This mark is often quite weak on these rifles, but this one is boldly struck and remains very crisp. Like most Whitney “Enfields”, the lock is secured by a pair of screws that pass through a pair of Enfield style winged, brass screw escutcheons. The lock operates crisply on all positions and is mechanically excellent. The metal of the gun has been lightly cleaned, and has a medium gun metal gray color, slightly toned down from its original “arsenal bright” polish. The metal is mostly smooth, with some thinly scattered, lightly oxidized pinpricking and peppering present on the barrel and lock. The peppering is slightly heavier in the breech and bolster area and on the lock plate, the result of percussion cap flash. The .58 caliber bore of the 33” rifle barrel is in about FINE condition and retains crisp and sharp 7-groove Whitney rifling. The bore is mostly bright, but shows some scattered darker patches and would probably benefit from a good scrubbing. The bore shows light pitting along its entire length, with a few small patches of more moderate pitting from about middle to barrel and continuing to the muzzle. The rifle has a US M-1855 rifle type front sight and as previously noted a saber bayonet lug near the muzzle. The rifle retains its correct two-piece Whitney Enfield triggerguard is in place, with a brass bow mounted to an iron trigger plate. This unique triggerguard and trigger plate assembly is another of the defining characteristics found on these Whitney “Enfield” rifles. Both of the original sling swivels are in place on the rifle, but the upper swivel is cracked on one side and has separated slightly. The original Whitney white metal forend cap is present at the end of the stock as well. The iron butt plate is stamped with the rack number 68 on its tang. The original Whitney-style, brass tipped ramrod is present and is full length, retaining good threads on the end. The stock of the rifle rates about VERY GOOD overall and is still relatively crisp throughout. The stock retains fairly good (if slightly worn) edges, and has very good wood to metal fit. The stock is solid and full-length, and free of any breaks, cracks or repairs. The only real issues worth noting are a pair of old slivers of wood missing along the stock to barrel joint on the reverse of the stock. These two slivers of missing wood measure about 6” in total length. The damage is quite old and probably from the period of use, as the exposed wood has aged, worn and smoothed from handling over the years. Otherwise, the stock shows the usual array of bumps, dings and handling marks and mars, but shows no other significant damage or abuse.

Overall this is a very nice example of a very scarce Whitney Type III Short Enfield Rifle. These guns do not come on the market very often and usually show heavy wear and use. This rifle is one of those guns that could have easily gone to northern or southern soldiers, and would be equally at home in a collection that centers on the arms of either side. For a collector of US Civil War secondary military rifles, this is a must have piece, in much better condition than is usually encountered. For an N-SSA shooter and collector, this gun just might be the short rifle you have been looking for to use in competition, as the seven groove bores have a reputation for accuracy. No matter what your area of collecting interest or specialization, it is an uncommon and desirable Whitney “Enfield” short rifle that I am sure you will be very proud to add to your collection.