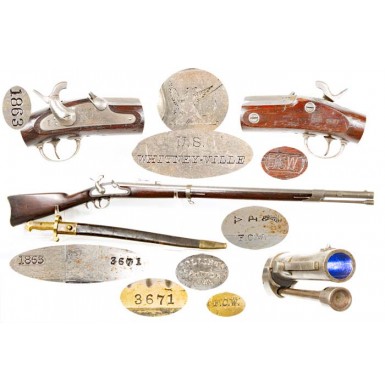 This is a FINE condition example of the US M1861 Naval Rifle as produced under contract by the famous Whitney Arms Company company, complete with its original matching numbered saber bayonet and scabbard. These rifles are often referred to as Plymouth Rifles due to the fact that the initial batch of arsenal produced test rifles, from which the contract pattern was derived, were tested on board the USS Plymouth from 1856-1858 under the direction of Captain (later Admiral) Dahlgren. The rifle is essentially a copy of the French M1853 Carbine à Tige and retains many of the French design features, including a finger spur on the rear of the trigger guard plate, the French pattern adjustable rear sight and the heavy cupped ramrod necessary to exert enough force on a loaded projectile to suitably expand it upon the Tige. Unlike the French musket, which was 18mm (about .708 caliber), the US variant used the more typical US .69 caliber bore. While the US Army was headed towards a reduced bore .58 rifle and rifle musket in the late 1850s, Dahlgren felt it important to retain the large bore for the rifles used on board ships. When the pattern was officially adopted as the US M1861 Naval Rifle, Whitney was awarded a contract in July of 1861 to deliver 10,000 of the rifles at a price of $25 each, to include a brass handled saber bayonet. A sample “Plymouth Rifle” (one of the original test guns from the 1856-1858 trials) was forwarded to Whitney to use as a guide in production, and Springfield Armory supplied sample locks, butt plates and trigger guards to copy. Whitney obtained permission to use his contract pattern 1861 model rifle musket locks that he already had on hand to help complete the contract in a timely fashion. He apparently took other liberties during the production of the rifles, as minor variances in hardware and furniture are not uncommon. Ever the penny-pincher, Whitney tried to utilize any parts already on hand to reduce the actual cost incurred to produce the Naval rifles. Unfortunately, Whitney had issues with the initial deliveries of the guns. He had hoped to have the barrels produced by Remington, but that company was too busy with its own government contracts to provide the rifle barrels. Whitney’s initial delivery on the contract was to be 500 guns in early February of 1862, but due to problems obtaining barrels, his deliveries were delayed. The first 2,000 barrels that Whitney obtained from a contractor failed to pass the government proof testing, and Whitney was forced to produce the barrels in house, from cast steel. This caused a substantial delay. Whitney delivered the first five guns under the contract in October of 1862, and they were found to be nearly two pounds lighter than the sample “Plymouth Rifle” that had been provided to him to guide the manufacturing of the guns. This weight loss would make the recoil from the rifle rather objectionable, but the exigencies of the situation resulted in the arms being accepted at the lighter weight. The first substantial delivery, of 100 arms, was made in early February of 1863. Some of the first M1861 Naval Rifles to see service aboard ships were issued to the Nansemond, the William Bacon and the Eutaw, all of which served with the Atlantic Blockading Squadron during 1863. By the end of 1863, Whitney had managed to catch up on his contract, and had delivered 5,300 of the rifles to the Navy. An additional 4,695 rifles had been delivered to the Navy by the end of 1864.

When the initial five samples delivered in 1862 are included, this brings the total to 10,000 pieces. It has often been suggested that many of these rifles never saw service, however arms historian and author John D McAulay contradicts that claim. In fact, he notes in Civil War Small Arms of the US Navy & Marine Corps that nearly all of the rifles delivered by the summer of 1864 were issued to warships. In fact, in September of 1864, the Boston Naval yard was turning down requests for Plymouth Rifles, as there were none available in stores. In one case, the commander of the Ella, serving with the Potomac Flotilla, requested on June 22, 1864 that he be allowed to turn in his Spencer Rifles due to their poor performance and replace them with Plymouth Rifles! He notes in his request that due to accidental discharges with the Spencers, two men had been killed and two more wounded. He also notes that not having bayonets for the Spencer’s reduced their effectiveness against boarders “by half”. This is likely one of the very few instances where a commander requested a muzzle loading percussion arm to replace a breechloading metallic cartridge repeater!

The rifle is well marked throughout, with very crisp marks on the metal and a fine cartouche on the stock flat. The lock is marked with the early style large format (SPREAD WINGED EAGLE & FLAG) forward of the hammer, and further forward is marked WHITNEY-VILLE. The later production Whitney Naval Rifles were marked with a smaller eagle over the letters “US”. The date 1863 is stamped vertically behind the hammer. The locks of the rifles were originally color case hardened for strength, and then polished bright. The number 3671 is stamped on the tang of the barrel. This number served both as a serial number and as the mating number that matched the one found on the brass hilted Collins & Company saber bayonet, which had been hand fit to the gun. Interestingly the “7” is stamped over a “0” that was originally stamped into the gun; apparently the workman made an error and had to fix it. These same type of “over-stamped” serial number corrections are found occasionally on other arms of the period. According to McAulay’s research, the rifles appear to have been delivered very close to numerical order, based upon the serial number, making this gun one of the guns delivered in mid-1863. The barrel shows an F.C.W.sub-inspection mark at the breech, the mark of civilian Naval arms inspector Frank C. Warner, who inspected Whitney’s contract Naval rifles. Warner’s script FCW inspection cartouche is also present on the counterpane of the rifle. The top of the rifle’s breech is marked with the matching date to the lock, 1863. While some of the earlier production rifles were delivered with undated breeches and without the standard US military proof marks, later production Whitney Naval Rifles like this one show the standard US military proof marks of a VP / (EAGLEHEAD) on the left angled breech and dates on the top of the breech. A clear US is stamped on the tang of the iron butt plate as well.

Overall the rifle is in FINE condition. It is 100% complete, correct and original with no replacement parts or repairs noted. It retains both of the original sling swivels, as well as the original heavy, cupped ramrod, which is full-length and complete with threads at the end. The French style 1000-yard, adjustable ladder rear sight is present and in excellent condition, and the original iron-blade front sight and the saber bayonet lug are all present as well. The metal is in very nice condition, retaining some of the original Armory Bright polished finish, which was probably lightly cleaned at some point in time and has dulled slightly with age. There are some scattered flecks of lightly oxidized age discoloration present along the barrel, as well as a few minor patches of pinpricking here and there. Most of the pinprick peppering is confined to the breech area, indicating that the gun was fired at least a few times, and the caustic fulminate of mercury percussion caps caused some very minor flash erosion. There is also some light pinpricking around the muzzle. The barrel flats remain sharp and crisp, as are all markings. The lock is well marked as well, and even the Whitney Eagle motif, which is often very lightly stamped, is relatively crisp and clear. The lock functions very well on all positions and works perfectly. The .69 caliber bore is in VERY FINEcondition and is mostly bright with crisp three-groove rifling. Although the bore shows some lightly scattered pinpricking, it is so fine that I’m sure this is a rifle that would be a tack driver were someone to want to shoot it. The wood on the gun is in about VERY GOOD+ to NEAR FINEcondition as well. The stock is solid, complete and full length and there no breaks, repairs or significant structural issues present. The stock has been cleaned at some point in time, with some old oil added, but does not appear to have been sanded. The stock still shows crisp edges and sharp lines. The wood to metal fit is also very good throughout. The stock does show a number of scattered handling marks, bumps, dings and bruises from handling and use. The largest number of small impact dings are found on the bottom of the stock, forward of the triggerguard. There are some scattered minor chips and ding along the ramrod channel of the rifle. The wear to the stock is consistent with that of a rifle that was issued and saw some service, along with storage both at sea and on land.

The rifle is accompanied by its matching numbered brass handled saber bayonet and an original scabbard. The bayonet was manufactured by the Hartford, CT firm of Collins & Company and is clearly marked by them on the reverse ricasso in three lines, with the top one arched: COLLINS & CO / HARTFORD / CONN. The bayonet is numbered 3671 on the top of the brass handle, to mate it to the gun that was fit to, which happens to be this rifle! The brass handled bayonets had to be individually fit to each rifle, and each bayonet hilt and each rifle tang were numbered to match so that the bayonets would remain with the guns that they were mated to. The pommel cap of the brass grip is stamped with the inspector mark F.C.W., again for Frank C. Warner. The bayonet is also accompanied by its original brass mounted, leather scabbard. The bayonet is in fine condition. It is full-length and has not been sharpened. The blade retains the some of the original armory bright polished finish, with some dulling from age and showing some cloudy discoloration. There is also some scattered surface oxidation present on the blade with some associated discoloration. This could probably be easily cleaned if so desired. The brass handle has an attractive, medium goldenrod patina. The original locking spring and stud are in place and they function, as they should. The scabbard is in FINE condition as well, with a lovely medium golden patina on the brass mountings and a strong and stable leather scabbard. The mounts show some scattered minor bumps and dings but remain solid and fully serviceable. The leather retains most of its original finish, with only some light to moderate areas of minor scuffing, light wear, and scattered minor crazing. The stitching in the scabbard seam remains tight and secure.

Overall this is a really very nice example of the Whitney M1861 Naval Rifle that includes its rarely encountered matching numbered saber bayonet. The rifle is 100% complete and correct in all way, and simply has a very attractive look to it. The bayonet matches the condition of the rifle well and of course fits it like a glove. With only 10,000 of these guns produced, it is a rifle that is often missing from even some advanced Civil War long arms collections. When these guns are found for sale they are often well used, as their life at sea, and storage in Naval facilities in close proximity to the salt air, certainly did not help to preserve these arms in high states of condition. This one is a really nice example that displays very well, particularly with its original bayonet and accompanying scabbard. This rifle and bayonet will certainly be a fine addition to any collection.