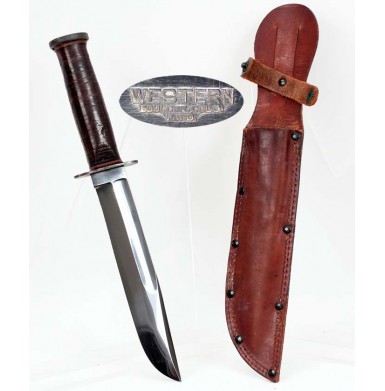 This is a VERY FINE to NEAR EXCELLENT condition example of the World War II production fighting knife, manufactured by the Western States Cutlery & Manufacturing Company. Western Cutlery was originally founded as Platts & Sons Cutlery in Gowanda, NY, in 1896. Charles Platts, who was an immigrant from Sheffield, England, founded the company. He had been employed in the knife making trade in Sheffield and knew the manufacturing process well. Platts also spent some 30 years working as a supervisor at the Northfield Knife Company in Northfield, CT, prior to staring his own company. Platts’ pocketknife business quickly became quite successful, and after only a year in business he moved the company to Eldridge, PA. Charles Platts died in 1900, but his sons continued to run the company until 1905, when his son H.N. Platts bought out all of the family owners and moved the company to Bradford, PA. In 1911, Platts moved the company to Boulder, CO, with the intention of taking advantage of the continuing western expansion in the United States. At this time he re-established the company with the new name: Western Cutlery & Manufacturing Company. Platts’ Boulder factory was one of the first production facilities in that city and his business continued to expand and prosper over the coming decades. Not long after moving to Boulder, Western Cutlery introduced two manufacturing trademarks “ Western and West-Cut. Their primary product lines revolved around pocketknives, but they also pioneered some innovative belt knife designs, including the introduction of double tangs and aluminum end caps. With the coming of World War II, Western Cutlery’s business expanded dramatically due to wartime production needs. Western Cutlery received a number of US government knife contracts during World War II and produced thousands of combat knives during the war years. In fact, one World War II era catalog folder proclaimed:

“For the duration, the entire output of the Western factory is ear-marked for the armed forces. This folder shows some of the specially designed knives we are now making for our fighting men.”

The knives listed included knives with names like “Shark”, “Fighting”, “Parachutist”, “Commando”, “Bushman” and “Seabee”. A World War II magazine advertisement noted that the Western “Shark Knife” is an “all purpose knife “ a fighter and a worker, ready to cut loose from wreckage, slice bread, open cans, trim toenails, kill Japs or wrest a living from a desert isle.” I find the juxtaposition of trimming toenails & killing the enemy particularly humorous. Obviously, Western Cutlery had a pretty good idea of the many tasks that a fighting-utility knife would be asked to handle in a theater of war. In 1984 Western Cutlery was acquired by the Coleman camping equipment company, who subsequently sold its Western Cutlery assets to Camillus Cutlery in 1991. In 2007 Camillus shut down the Western Cutlery factory and the trade name ceased to exit.

This Western Fighting Knife No. G-46-8” is in about NEAR EXCELLENT condition. Although many of the Western knives produced during World War II utilized Western’s aluminum pommel cap, the G-46 incorporated a simple round steel pommel cap that was blued and secured by peening the ends of the double tang that projected through it. According to a letter dated January 19, 1961 from Harlow C. Platts (President of Western at that time), to M.H. Cole (the famous knife maker, knife historian & author), the #46 knife was produced by the thousands during the Second World War. Platts notes in part: “Regarding the second knife, which is our #46 pattern, we made thousands of these both for the Army and Navy. They proved very popular and we still get them back to be repaired or made over.” The #46-8” had an 8” clip point blade that strongly resembled the blade of the USN Mark II knife and the USMC fighting-utility knife. The majority of the knives had blued blades and pommel caps and the usual leather washer handle with thin red and black Bakelite spacers at both ends. The knives were delivered in sewn leather scabbards that were reinforced with rivets. The scabbard had a pair of belt loop slits in the integral frog and a, hilt-retaining strap that was secured with a snap. This particular Western G-46-8” Fighting Knife retains about 90%+ of its original deeply blued finish on the 8” blade. The loss is mostly along the high points of the blade, and appears to be mostly from insertion and removal from the scabbard, along the some handling. The blade retains its original factory edge and shows no signs of sharpening. The obverse ricasso is unmarked, and the reverse ricasso is crisply and deeply marked in three lines: WESTERN / BOULDER, COLO. / PAT’d. The blade is free of any pitting, or signs of oxidation. The stamped metal crossguard and the exposed edges of the dual tangs that run down the length of the grip show some scattered patches of light to moderate surface oxidation. Some of this could probably be lightly cleaned, if so desired. The pommel cap retains about 50% of its original bright blued finish, and shows a pair of roughly peened tangs. These are somewhat cruder than normally encountered on Western knives, but not completely unknown. The hilt is in about FINE condition and the leather washer grip is crisp and in very nice shape. The leather washers show only minor handling marks and light scuffing, although they are slightly uneven, which appears to be due to some of the washers shrinking with age. The grip is bookended by a pair of black and a single red, Bakelite washers at the crossguard and pommel cap. A correct, Western Cutlery leather sheath accompanies the knife, and shows the expected two lines of stitching around the perimeter, reinforced with blackened, domed rivets. The sheath is in about FINE condition and shows the wear commensurate with the use shown on the knife. The majority of the stitching is in place around the periphery of the scabbard and remains secure, although there are a couple of tiny areas of minor thread loss. All of the rivets are in place and secure as well. The hilt-retaining strap is in place as well, a feature that is often missing from these scabbards, due to use, wear and age. The sheath retains the majority of its original finish, but does show a number of scuff and wear marks, and some areas of darkening from dirty and oil, as would be expected. There is also a very small tear in the leather at the mouth of the scabbard, along the edge of the blade. This is about a 1/2" tear in the leather, running from the mouth to just past the first reinforcement rivet. This is minor, and does not materially affect the display of the knife, but is mentioned for exactness.