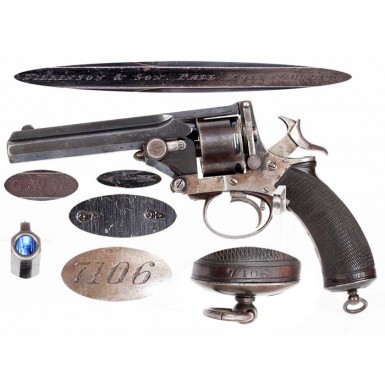 This is a VERY FINE condition example of the Webley-Pryse #4 Revolver, which is retailer marked by the famous firm of Wilkinson & Son of London. The Birmingham based firm of Philip Webley & Son was a large and successful gun making concern that had originally been established in 1834 when Philip Webley went into business with his brother James. In 1838 Webley married the daughter of Birmingham gun implement maker William Davies and the two businesses merged at 84 Weaman Street. In 1859 the business became known as P Webley & Son, when Webley’s son joined the organization. In 1877 P. Webley & Son acquired the firm of Tipping & Lawden and expanded once again, taking additional space on Weaman Street, with their address growing from #84 to #82 to #89. In 1897, Webley merged with W&C Scott, forming the famous arms company Webley & Scott. The company went through a number of mergers and purchases over the next 100+ years, and the trade name remains in use today, as an amalgamation of the famous British firms of W&C Scott, WW Greener & Holland and Holland. Webley was always at the forefront of revolver design and innovation. He introduced his first percussion revolver, the Webley Long Spur, in 1853 and quickly followed upon that success by introducing the Webley Wedge Frame, which he introduced as a more reasonably priced alternative to Adams Patent and Tranter solid frame revolvers. In 1867 Webley introduced his famous double action cartridge revolver that quickly became known by the name of the police department that adopted it, The Royal Irish Constabulary. The R.I.C. revolver was very successful and remained in production until rendered obsolete by more modern designs. In 1878 Webley introduced his famous “Bull Dog” revolver, which very successful and was widely copied around the world. However, it was the introduction in 1877 of Webley’s Pryse patent double action revolver, known as the #4, that started the Webley dynasty of top-break revolvers that would come to reign supreme among British military service revolvers until the 1960s! Charles Pryse’s design was a 6-shot, double action, self-extracting revolver, with top-break action. A pair of spring-loaded levers at the rear of the cylinder locked the barrel and topstrap to the lower portion of the frame. Depressing the lower portion of both levers freed the top strap, and the barrel could be tilted down to expose the rear of the cylinder. The motion of depressing the barrel actuated a star extractor at the rear of the cylinder, which ejected the spent cartridge cases, emptying the chambers for reloading. The revolver also incorporated a rebounding hammer design, which greatly enhanced the safe handling of the revolver. The revolver was manufactured in a variety of calibers, with .450 Webley (equivalent to the .450 Adams cartridge) being the most popular, and chamberings as large at .577 being available. The success of the Webley-Pryse #4 lead to Webley refining the design, the result of which was the Webley Mark 1, which was developed in 1880 and adopted by the British military in 1887. The biggest design improvement in the Mark 1 was the introduction of Webley’s “stirrup catch”, which replaced the Pryse locking system, and allowed the action of the revolver to be unlocked with the thumb of the shooting hand, while still holding the revolver in a shooting grip. During the decade prior to the British military adoption of the Mark 1, the #4 was extremely successful and popular and many were sold to British officers as personal sidearms. It was during the last half of the 19th century that the famous Wilkinson Sword company came to rely on Philip Webley & Son (later Webley & Scott) as a major source for the firearms that they retailed. Interestingly the Wilkinson Company could trace its roots to renowned London gunmaker Henry Nock who had established himself in that business in 1772. James Wilkinson was Nock’s son-in-law was the manager of Nock’s business, which became Nock & Wilkinson in 1785. Wilkinson continued to run the business as James Wilkinson, after Nock’s death in 1804. In 1818 James’ son John would join the business, creating Wilkinson & Son. In 1829 the business moved to their famous Pall Mall address in London, where they would remain through 1888. In 1848 James passed the business on to his son Henry Wilkinson. In 1861 Henry died and the business passed to manager John Latham, and much like the passing of Nock’s business to Wilkinson, the Wilkinson business was now owned by a person whose name was not that of the company. It was during the mid-19th century that Latham changed the general direction of the business from firearms production to the production of swords and edged weapons, although they continued to retail firearms of all types into the 20th century. In 1888, Latham’s son established the Wilkinson Sword Company, LTD, which was reorganized as Wilkinson Sword LTD in 1909. During the latter 19th century Wilkinson retailed a large number of Webley and Webley & Scott produced firearms, including the Wilkinson-Webley revolver. Wilkinson started to serial number firearms and blades during the 1850s, and maintained fastidious records regarding the sales of these arms. Today, Wilkinson retailed arms can be researched by serial number, and a “factory letter”, much like the Colt factory letter can usually be obtained on Wilkinson retailed arms. A research letter regarding specific Wilkinson retailed arms can be order through Richard Milner LTD it the United Kingdom. Research order forms can be obtained through the web site: www.armsresearch.co.uk.

This is a VERY FINE condition example of the Webley-Pryse #4 Revolver, retailed by the famous Wilkinson & Company. The top flat of the barrel is clearly and crisply engraved with the retailer mark WILKINSON & SON PALL MALL LONDON. The Wilkinson serial number 7106 is engraved on the bottom of the triggerguard and on the lower left side of the checkered walnut grip. According to armsresarch.co.uk the records on this pistol should be contained Records Book 3, which covers serial number 6701-8010, retailed between 1877 and 1885. Ordering a “factory letter” for the gun is probably worth doing, as this was almost certainly a private purchased British officer’s revolver. The initials G. W. W. are inscribed under the barrel, about 1 ““ from the muzzle. It would be very interesting to find out who “G.W.W.” was, and that information is probably in the Wilkinson record books. The revolver appears to be chambered for the .450 Webley cartridge (essentially equivalent to the .450 Adams cartridge). The gun has a 5 ““ octagon barrel with a top rib, and has a 1 3/8” cylinder, with an overall length of about 11”. The revolver retains about 65%+ of its original bright blued finish. The barrel and web portion of the frame retain about 90%+ of their blue, with some thinning and fading. Most of the finish loss is from handing and use, with the typical wear along the sharp edges and at the muzzle. The barrel is smooth and free of pitting with only some scattered patches of lightly freckled surface oxidation present. The top rib of the barrel is marked with the Wilkinson & Son retailer mark, and the lower left side angled flat is marked with a pair of London commercial proof marks. The cylinder retains about 50%+ of its original bright blue, with most of the fading and loss on one “side” of the cylinder, suggesting the loss is the result of being stored with a portion of the cylinder touching a fabric surface. The cylinder is mostly smooth, with some lightly scattered areas of pinpricking present, particularly on the face of the cylinder. In the typical Webley fashion, the chambers are numbered. The typical London commercial proof marks are also visible between the chambers of the cylinder. The frame, backstrap and frontstrap of the pistol retain about 10% of their original bright blue, with most of the loss appearing to be the result of flaking. The frame shows no pitting, and only the most minor areas of very lightly scattered pinpricking. The butt cap retains its original lanyard ring, and has a smooth plum-brown patina. The action of the revolver is mechanically excellent. Both the double action and single action mechanisms function crisply and correctly in every way. The Pryse locking system works perfectly as well, smoothly releasing the action to open when the levers are depressed and tightly locking the action when the pistol is closed. The extraction system works perfectly as well, with the star shaped extractor actuated by the opening of the action and the forceful depression of the barrel. A small knurled knob on the left side of the frame, forward of the cylinder, allows the removal of the cylinder. The knob has an arrow engraved on it, and when the arrow is facing the muzzle (like a similar arrow engraved on the barrel above it), the cylinder is locked to the mechanism. When the knob is rotated 180-degrees, and the arrow faces to the rear, the cylinder may be removed from the revolver when the action is opened. The bore of the pistol rates about FINE it is bright and retains crisp rifling. The bore does show light pitting along its entire length, but this should in no way affect accuracy of an otherwise very sharp bore. The checkered one-piece walnut grip is in VERY FINE condition as well. It is solid and complete and free of any breaks, cracks or repairs. The checkering remains crisp and sharp throughout, with only some lightly scattered handling marks and minor dings.

Overall this is a wonderful example of a scarce and desirable Webley Pryse #4 Double Action Revolver, with a very desirable Wilkinson & Son retailer mark. The fact that the gun was Wilkinson retailed means that it is probably contained in the Wilkinson archives and additional information about the gun and its owner are likely available. The gun was most likely a British officer’s privately purchased firearm, and may well have seen service during the Zulu War (1879), the 1st Boer War (1880-1881) or any of the various colonial wars that the British were engaged in during the 1870s & 1880s. The revolver is in wonderful condition and remains very crisp and sharp. It is mechanically excellent and displays very well. I’m sure it will be a wonderful addition to your collection of late-19th British firearms. I hope the new owner will share whatever they discover in the Wilkinson records with me, once they have had the gun researched.