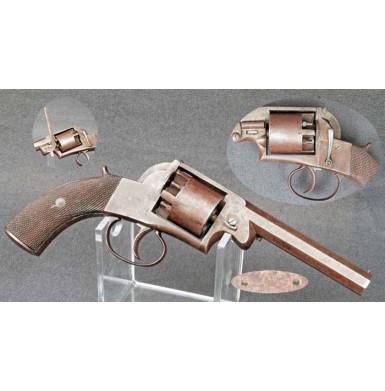 This is a very nice example of the English Webley-Bentley style double-action revolver, as produced in the late-1850’s through the mid-1860’s. These guns provided less expensive alternatives to the Adams and Tranter patent revolvers of the day. The primary cost savings was in the use of a 2-piece frame and barrel design, similar to that of Colt revolvers, with the two parts held together via a “wedge”. Adams and Tranter revolvers utilized one-piece frame/barrel assemblies that were forged from a single piece of iron and were much stronger and less prone to breakage and wear with age. The “wedge” frame design is attributed to Birmingham gun maker Philip Webley. The simplified double-action lock mechanism typically encountered in these revolvers is usually of the John Bentley design, thus these guns are usually referred to as Webley-Bentley revolvers, even though they were produced by many Birmingham gun makers and are often unmarked. This Webley-Bentley is one of the better-made examples and includes a top strap over the cylinder to reinforce the frame; many Webley-Bentley guns were manufactured without a top strap. The gun is a typical English double-action revolver and features a 5 shot cylinder, a 5 1/8” long barrel and is in the standard 54-bore caliber (which is about .442). It has a simple double-action only firing mechanism and the characteristic “hump backed” English style grip strap. The gun has a pivoting frame mounted loading lever that is similar to the Kerr patent lever. The gun is completely unmarked, except for standard Birmingham black powder proofs between the cylinder chambers and on the bottom of the barrel. A Bentley patent style spring loaded “safety” is mounted on the left hand side of the frame, keeping the hammer from contacting the cones (nipples) unless the trigger is pulled, and allowing the cylinder to be freely rotated for loading. In typical English revolver style, the cylinder only “locks up” when the trigger is pulled completely back. This eliminates the need for a spring actuated cylinder stop in the bottom of the frame. These reliable and reasonably priced double-action revolvers were popular export items and were available for sale around the world. Even Confederate purchasing agents purchased these revolvers, as they were much less expensive than the competing Adams, Tranter & Kerr patterns. The Pratt Roll, which is a list of revolvers that details the 15 handguns in the possession of Company H of the 18th Virginia Cavalry in July of 1864 lists 3 Webley / Bentley revolvers, as well as 4 of “unknown” pattern. The balance of the revolvers are 7 Kerr’s & 2 Tranter’s. This indicates that even in this small sample of CS used revolvers, 20% were of the Webley and/or Bentley patterns. A handful of examples of similar English double action revolvers are known with pre-war Southern retailer marks, usually from New Orleans retailers. New Orleans seems to have been a major source for imported English revolvers prior to the Civil War. These include gun retailer marked by Thomas Bailey and D. Kernaghan & Co, both of New Orleans. While there are no direct Confederate contracts known for these pattern of arms, some Confederate correspondence exists that suggest the more reasonably priced double action revolvers were purchased primarily by speculators for importation to the Confederacy, in both 80-Bore and 54-Bore. It appears that most of these guns were imported through Texas ports and many saw use in the Western Theater and the Trans-Mississippi Theater. There are additional examples of Webley-Bentley and Birmingham style double action revolvers with Confederate provenance. These include a gun in the collection of the Museum of the Confederacy which is attributed to Lt. Robert Aunspaugh of the 10th Battalion Virginia Heavy Artillery, the gun of Colonel John Smith of the 20th Alabama Infantry (ex-Bond collection) and one reported to be engraved to General William Mahone

This double action Webley-Bentley is a classic “export” revolver, and is totally unmarked except for the Birmingham proofs. It is unclear if the gun remains unmarked to keep it “sterile” so that its source could not be easily determined, or if it was intended to be marked by the retailer after export. The lack of patent tracking serial numbers implies the gun was made without paying the Webley wedge frame and Bentley action royalties. The gun rates about VERY GOOD+ and retains only the smallest traces of original finish in the protected areas, and has a lovely, smooth mottled plum-brown patina over a dull-gray base color. The metal is mostly smooth with only some light scattered patches of minor peppering and pinpricking. The revolver is fully functional and the action works crisply with good timing and lock up. The frame mounted loading lever functions smoothly, exactly as it should. The bore of the revolver rates about GOOD. It is dark brown and dirty, with scattered pitting along its entire length. The bore does retain strong and very visible rifling. The two-piece checkered wood grips are in about FINE condition with only some light age wear and minor flattening from carry and use. They are in solid condition, with no cracks or repairs.

Overall this is an attractive example of one of the less often encountered English percussion revolver. These guns were the pistols of the average man, and were guns that often saw heavy use and were “used up”, resulting in a relatively low survival rate. This one is 100% correct and complete and functions just as it should. It would be a nice addition to any collection of Civil War era revolvers and would be equally at home in a collection of typical Confederate used handguns. It is a nice, large bore pistol that displays well and is reasonably priced.