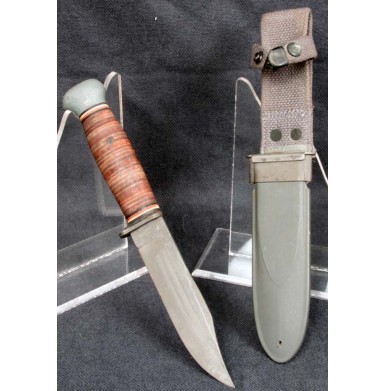 This is an about EXCELLENT condition example of the USN Mark 1 fighting knife, manufactured by the PAL Cutlery Company. According to The Official Price Guide of Collector Knives by C Houston Price & Mark D Zaleysky, PAL was originally used as a trademark by the Utica Knife & Razor Company of Utica, NY from about 1924-1939. PAL marked knives of that era used blades imported from Germany, and the blades typically bore the word “Germany” as well. Another company using the name PAL was established in Chicago in 1934. This company was known as the Pal Blade Company of Chicago, and was started by Otto Kraus. In 1935 the two “PAL” companies merged into one, known simply as the PAL Blade Company, and opened a manufacturing facility in Plattsburg, NY. Around 1940 PAL purchased the cutlery division of the Remington Arms Company, including of their existing stock of completed knives and knife parts. While PAL was originally a manufacturer of pocketknives, but after the Remington acquisition they expanded their range of products to include a variety of fixed blade knives as well. PAL received a number of US government knife contracts during World War II and produced thousands of combat knives during the war years. Pal went out of business in 1953.The USN Mark 1 combat knife was produced by a variety of manufactures during World War II and was issued to Navy personnel by the thousands. It had a 5 ““ long blade and was patterned after typical hunting and sideknives of the era. The subsequent Mark 2 knife had a longer 7” blade. This particular example was manufactured by the PAL Cutlery Company and is clearly marked on one side of the blade: RH “ PAL / MADE IN USA “ 35 and U.S.N / MARK 1 on the other side. The knife is in NEAR EXCELLENT condition, with the blade retaining about 90%+ of its original grayish parkerized finish. The blade shows only some light finish wear from insertion and removal from the composite scabbard. The blade is unsharpened, and retains its untouched factory edge, which is exactly the way you want to find a high condition knife. The hilt is composed of multiple thin leather washers, with the ones closest to the cross guard being of red, yellow and black. This same multi-colored washer pattern occurs near the cast aluminum pommel cap as well. The hilt washers are in NEAR EXCELLENT condition as well, and show only some light scuffing and very minor handling wear. The knife is accompanied by its original USN Mark 1 gray composite scabbard. The scabbard is in NEAR EXCELLENT condition, like the knife. The throat is clearly marked: U S N / MK 1. The woven gray belt loop is in wonderful condition with no real wear or fraying. The original retaining strap with blackened metal snap is in place and functions as it should. The scabbard body shows only some light scuffs and minor handling marks and has no dings, cracks or significant wear.

Overall this is a very high condition example of a wonderful PAL 35 USN Mark 1 combat knife with a wonderful condition scabbard. No collection of World War II US military knives is complete without a Mark 1, and for a condition conscious collector, it would be difficult to find one much nicer than this.