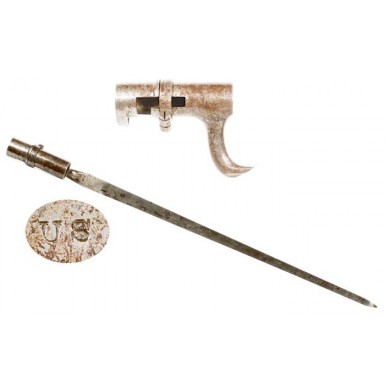 This is a VERY GOOD condition example of the scarce US M1867/69 Cadet Rifle Socket Bayonet (Reilly B126). These bayonets were made up for use on the US Model 1867 and Model 1869 “Trapdoor” Cadet Rifles and were also used for the US M1867 Navy Rolling Block Cadet Rifle. Like most US cadet bayonets of the 19th century, the blades were shorter and slightly thinner than the standard issue socket bayonets of the period. During the late 1860s, most of the bayonets in use were still US M1855 socket bayonets from the Civil War era, as most of the newly adopted .50-70 Trapdoor rifles were made up from parts on hand or were actual alterations of Civil War period muskets (1st and 2nd Allin Conversions). Thus, the guns had barrels with the same outer diameter as the earlier muskets and the old pattern bayonets fit them correctly. Later, as the caliber was reduced to .45-70 and smaller bayonet sockets were required, many of the older bayonets were sleeved or compressed to fit the smaller barrels. These cadet bayonets were newly made and were not altered from existing stocks of M1855 bayonets.

Although Reilly’s American Socket Bayonets and Scabbards two variations of this bayonet are depicted as Figures B126 and B127 with minor differences between them. Reilly refers to these as Model 1866 and Model 1869 Cadet bayonets, but no M1866 Cadet Rifle existed, and this identification is probably based on the fact the M1867 Cadet Rifles have 1866 dated breechblocks. Only 424 of the M1867 Trapdoor Cadet Rifles were produced circa 1867-1868. In 1869, a new Trapdoor Cadet Rifle was adopted and some 3,422 of these were produced between 1869 and 1876. These bayonets were also used for the US M1867 Navy Rolling Block Rifles, of which only 498 were produced. Only a total of 4,344 cadet rifles of all patterns were produced that accept these bayonets, so it seems reasonable that even with loss and damage only about 5,000 of these bayonets were produced. As Reilly notes, there is some minor variation in the two versions pictured with the second variation (B127) being slightly shorter and with the socket bore diameters varying slightly between .739” and .753”; smaller than the nominal .780” bore diameter of the M1855 bayonets for .58 muskets and larger than the nominal .730” bore diameter of the M1873 bayonets for the .45-70 rifles.

This example of a US M1867/69 Cadet Bayonet is in VERY GOOD condition. The bayonet conforms almost perfectly to the dimensions given for example B126 in American Socket Bayonets and Scabbards. The bayonet has a 16 ¼” long blade with a 14 ¾” face flute and is 11/16” wide at the widest point. The socket is 3” in length with a .748” bore diameter and a 1 3/16” muzzle to stud distance. The overall length of the bayonet is 19 3/8”. The bayonet has a medium pewter patina with scattered surface oxidation and some minor corrosion with a discoloration pattern that suggests the bayonet may have been wet and the metal was lightly etched by whatever liquid caused the discoloration. The patterned discoloration conforms to metal items that were exposed to salt water, so the this bayonet may well have been one that was used with the Rolling Block Naval Cadet Rifles. There is also some scattered light surface rust and oxidation on the socket. Some of of this surface crust might be cleanable. The bayonet is full-length and the blade is clearly and deeply marked US on the face at the ricasso. The original locking ring is in place and functions correctly.

Overall, this is a nice example of a scarce Indian War period US cadet socket bayonet for use on the M1867 and M1869 Cadet Trapdoor Rifles and the M1867 Navy Cadet Rolling Block Rifle. These are not common bayonets and do not pop up for sale very often. This would be a nice addition to your cadet rifle, a chances are you don’t have the correct bayonet for the gun displayed with it.