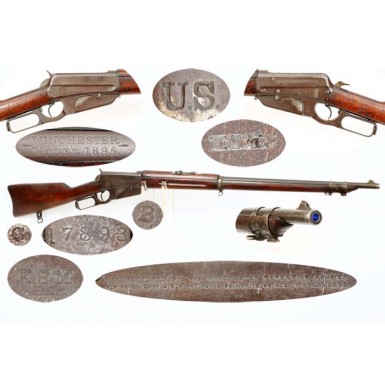 Offered here is a VERY GOOD condition example of the very scarce US Military Winchester M-1895 Rifle. The gun is serial number 17893 and was produced in 1898. Based upon its position in the serial number sequence for 1898 manufactured Model 1895s (serial numbers ran from #7815 to #19871 that year), this rifle was probably part of the second delivery of guns to the US military in January of 1899. The gun is correctly marked with a large US on the forward part of the receiver and the sub-inspection initials of Kelly S. Moore, KSM, appear on the left side of the lever and on top of the bolt. The breech of the barrel, under the handguard is correctly inspected KSM and also marked with the caliber designation 30 US. Additional small inspection marks appear as well, including a B on the bottom of the lever and a C in the tang behind the trigger and serial number. The left side of the receiver is marked in two lines:

The breech tang is marked in two lines:

The triggerguard tang is marked with the serial number 17893. The rifle is 100% complete, correct and original in every way and retains its original sling swivels, rear sight and bayonet lug. The action of the rifle is in EXCELLENT condition and functions crisply and correctly in every way. The receiver retains no original finish to speak up, and has a mostly smooth plum-brown patina with some flecked traces of blue visible under strong light. In some of the receiver and lever the wear has left a dull pewter gray color to the metal with no patination of the remaining finish. The barrel has a much thicker and more even plum-brown color and probably retains about 20%-30% faded and oxidized blue, which has turned a very attractive plum-brown as so often happens with old, untouched Winchester finishes. The receiver shows some lightly scattered pinpricking and a few tiny spots of light pitting, along with some scattered patches of minor surface oxidation and light roughness. The barrel remains almost entirely smooth and shows only some very lightly scattered pinpricking and some very light pitting around the face of the muzzle. There is also some wear to the finish and patina at the muzzle from the mounting and dismounting of a bayonet. The buttplate has a moderately oxidized dark gray patina over a mostly smooth, pewter gray base color and shows evenly distributed pinpricking and some scattered surface oxidation as well. The implement trap is in place in the buttplate, but the spring is quite strong and it is difficult to open or close the trap door. The implement compartment in the stock is empty. The bore of the rifle rates about GOOD+ and is relatively dark and heavily seasoned, with even light pitting along its entire length with some patches of more moderate pitting present as well. The buttstock of the rifle rates about VERY GOOD as well, and is solid and complete without any breaks, cracks or repairs. The buttstock shows a significant number of bumps, dings and surface marks, but nothing that rises to the level of abuse, simply real world use. A number of circular impact marks are preset on the obverse of the butt, forming a sort of pattern, and the initials CP are lightly carved in the reverse of the butt, possibly with some other letters. The forend rates about VERY GOOD as well and like the butt remains solid and complete and free of any breaks or repairs. It does show numerous bumps, dings, scuffs and mars like the buttstock does, all indications of some serious real world carry and use. The bottom of the forend, just forward of the receiver is stamped with a small 2 that appears to be an inspection mark. The handguard on the top of the barrel is in about GOOD+ condition. It shows significant wear like the balance of the wood, but also shows some grains cracks. At least four such grain cracks are present, two forward of the rear sight and another two to the rear of the sight. They remain tight and secure and have not been repaired but should probably been stabilized with some gun underneath. The handguard is notoriously weak, as it is fairly thin and has two spring clip inlet into its bottom, thinning the wood even more. The cracks are tight and with the grain but should certainly be attended to at some point in time. Otherwise the handguard is in about the same condition as the forend and butt of the rifle.

Overall this is a very nice, solid and complete example of the scarce US Military Contract Winchester M-1895 Rifle. These guns do not appear on the market very often and when they do they usually show the heavy use and abuse you would expect from a rifle that was likely carried by one of Pancho Villa’s Mexican revolutionaries for many years. This is one of the few cases where it appears nearly every example of this US military arm was sold as surplus and sold out of the country. That means that any US military Winchester 1895 found today was probably reimported into the US at some point in time, after doing duty in Cuba, Mexico or possibly a South American country. That is why the guns are so scarce today, most of them simply did not survive to make it back to the place of their birth! For any serious collector of US military arms this is a very hard rifle to find, and one that is missing from even most advanced collections. The rifle is an appropriate inclusion in a Spanish American War collection, a Philippines Insurrection collection, and one that covers General “Black Jack” Pershing’s punitive campaign against Mexico and Pancho Villa in 1916. This is a very solid, complete, original and authentic example that you will not have to make any apologies for and that you will certainly be glad that you added to your collection of late 19th century US military long arms.