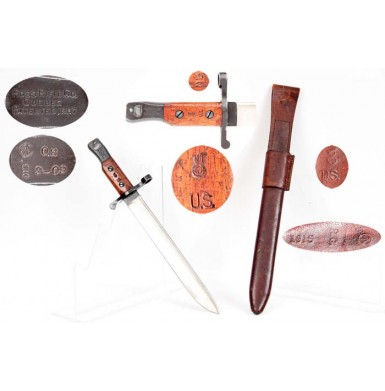 This is a really outstanding example of a scarce US Marked Mk1 Ross Rifle Bayonet & Scabbard. The Ross Rifle was the first Canadian military long arm to be produced in that country. Up until the adoption of the Ross rifle, the Canadian military had relied upon Great Britain to provide the small arms that they required. However, during the 2nd Boer War (1899-1902) Great Britain was unable to provide sufficient military rifles for the Canadian forces, so the Canadian government pursued the production of arms in their own country. After offering several English gunmakers, including B.S.A., the opportunity to set up a factory in Canada, being turned down, a completely Canadian solution was adopted. Sir Charles Ross became an arms manufacturer after having the Ross pattern rifle approved by the Canadian Ordnance Department, and receiving a multi-year contract to manufacture the rifles. In 1902 Ross established his factory and soon began production of his high quality straight pull, bolt-action rifle. The Mk1 Ross rifle began production in 1903, and the Mk 2 Ross rifle went into production in 1905. Initially neither version of the rifle accepted a bayonet, but in 1906 a bayonet design was experimented with, and in 1907 field trials were performed with the new bayonet and modified Ross rifles. In 1908, 52,000 of the newly adopted Pattern 1908 (Mark 1 Ross) bayonets were ordered for use with the Ross rifles. The bayonet was 14.7” in overall length, with a 10”, hollow ground “butcher knife” style blade. The blade was left in the bright and often showed tool marks. Much like the US M-1905 bayonet of the same era, the hilt, guard and about ““ of the ricasso of the bayonet were blued. The bayonet had two piece wooden grips and a leather scabbard with integral belt frog, with a blued metal chape on the interior of the scabbard, and a steel throat, concealed by the scabbard body and frog. The blades were unmarked, but the pommel caps were marked with manufacturing information on the obverse and manufacturing dates and inspection marks on the reverse. In 1912 a newer pattern bayonet (Mark 2) was adopted for use, with minimal changes in the overall design. The most obvious changes were a reduction in the length of the muzzle ring (making is flush with the cross guard) and a re-profiling of the blade tip. The Ross Rifle saw use with Canadian troops through the first couple of years of World War I, but the straight pull bolt and the tight tolerance action design did not fare well in the trenches of the Western Front. The rifles were inherently more accurate than the British P-1907 S.M.L.E., but were not nearly as reliable. The end result was that by 1917 the Ross Rifle had all but been withdrawn from military service, with the exception of some specialized use by Canadian snipers. This removal from service happened at an opportune time, as the United States had declared war on Germany and the Central Powers and was gearing up for war. As the US military did not have nearly enough rifles to arm the American Expeditionary Force troops that were already embarking for Europe, let along for troop training purposes, alternate sources for small arms were actively investigated. In October of 1917 the US Ordnance Department started negotiations with the Canadian government to purchase 20,000 Ross Rifles and Mark 1 Ross Rifle Bayonets for use by US troops while training. On November 17, 1917, the deal was finalized, at the price of $12.50 per rifle & bayonet, also including slings, scabbards and oil bottles. For most of the next year, about half of these rifles and bayonets saw service as training rifles at Camp Devens in Massachusetts, and Camp Sherman in Ohio. The balance of the Ross rifles and bayonets were also issued to the New York state guard for the protection of the state. By the end of 1918, sufficient US M-1903 Springfield rifles were available for issue to both US fighting forces and training regiments, and the Ross rifle was withdrawn from service. After the war, some of the Ross rifles were sold as surplus, but the sales were slow, and many of the rifles remained in US Ordnance Department stores. In 1940, many of these same rifles and bayonets were returned to Canada under the Lend Lease Act for use against a new German threat to world peace. The 20,000 Ross rifles and bayonets that were obtained by the US during World War I were all marked with “US’ surcharges, as well as the “Flaming Bomb” US Ordnance Department inspection stamp. Today these guns and bayonets are rather scarce. Only 20,000 were acquired in the first place, and many were sold for surplus after the war, with the guns often being sporterized and the bayonets seeing use as hunting knives. Even more of the US purchased rifles were returned to the Canadian’s for World War II use. The end result is that finding either a US marked Ross rifle or bayonet in very fine or better condition is very difficult these days.

The Mark 1 Ross Bayonet & Scabbard offered here is in truly EXCELLENT condition. The bayonet retains nearly all of its original arsenal bright finish on the blade, complete with the typically encountered tool marks that are common to Ross bayonet blades. The blade is full length and retains its original factory edge, with no additional sharpening. The ricasso retains about 85% of its original ““ of protective blue and the hilt and cross guard retains a similar amount of blue, with only significant wear and loss being along the high edges and the reverse of the locking catch button. The blade has dulled only slightly from its original polished appearance and shows only some minor scuff marks from being inserted and withdrawn from the scabbard over time. The obverse pommel cap is clearly marked in three lines: ROSS RIFLE CO. / QUEBEC / PATENTED 1907 and the reverse pommel cap is marked with: the Canadian “Broad Arrow” inspection mark (a “C” around a “Broad Arrow”), with the pattern reference 08, with a small (CROWN) / 8 inspection mark and with the manufacturing date 9-08 (September of 1908). The obverse grip panel is crisply and clearly stamped U.S. and is surmounted by an equally crisp US Ordnance Department (FLAMING BOMB) mark. The reverse grip shows a (CROWN) / 2 Canadian inspection mark. The wood grips are in VERY FINE+ condition and show only the usual bumps, dings and minor impact marks from handling and light use. The grips are free of any breaks, cracks or repairs and remain solid. The bayonet locking catch is in fine mechanical condition and functions smoothly. The bayonet is retained in its original, US marked Canadian Ross bayonet scabbard. The scabbard is in NEAR EXCELLENT condition. It retains nearly all of its original dark brown finish and shows only some light scuff marks and minor scrapes, most of which are on the frog and belt loop. The leather remains is fine, supple condition with tight stitching throughout. The scabbard shows a number of original Canadian as well as American inspection marks. The reverse tip of the scabbard is marked with: the Canadian “Broad Arrow” inspection mark, the inspector initials R.C. and the manufacturing date 1915. The upper part of front of the belt loop is also marked with the Canadian “Broad Arrow”. The face of the frog is clearly stamped with the letters U.S. surmounted by an equally clear US Ordnance Department (FLAMING BOMB) mark.

Overall this is an incredibly high condition example of a rather scarce US marked First World War bayonet. With only 20,000 purchased and marked to begin with, these bayonets were rare even when they were issued. However, time, attrition and repatriation has made these bayonets even harder to find. When you do find them, they are practically never in this kind of near mint, as issued condition. For an advanced collector of Great War bayonets and edged weapons, this is a “must have” example of a Mark 1 Ross Bayonet that would be nearly impossible to upgrade from. If you have a scarce and near mint condition Ross Rifle, this will be the perfect addition to the display of your high quality gun. This is a fantastic condition example that you will be very proud to display.