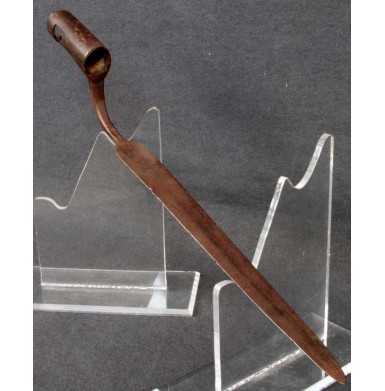 This is a wonderful example of an early American, pre-Revolutionary War era socket bayonet. The bayonet is completely untouched and is covered in a thick brown patina. The bayonet appears to be an American made copy of an early Dutch socket bayonet. The complicated mortise cut has long been referred to as being of the “Hessian” pattern, but in reality these bayonets tend to be of Dutch origin and developed their “Hessian” association due to the extensive use of Dutch muskets by the Hessian mercenaries that were hired by the British during the American Revolution. The bayonet is about 15 ““ in overall length with a 12 ““ long, 1” wide blade that has a flat face and a triangular cross section. The bayonet has a 2 13/16” long socket which is slightly out of round and which has a bore diameter that varies between .832” and .882”, with an average bore diameter of .857”. This would indicate that the bayonet was meant for a musket or fusil of approximately .69 to .71 caliber. The mortise is cut for a bayonet mounting stud located on the top of the musket barrel. The form of the bayonet with the long, sloping, flat faced, long, curved shank and rounded blade tip and shoulders are all typical features of the Dutch socket bayonet form from about 1715 through the 1770's. Since most Dutch muskets had a bottom mounted bayonet stud, and since the overall construction of the bayonet is fairly crude, it is my opinion that this is an early American made copy of a Dutch bayonet. The British contracted for similar pattern Dutch bayonets in both 1715 and 1740, and some of those bayonets were likely part of the shipment of Dutch muskets that were exported to the colonies during the Seven Years War (French & Indian War). Most of those muskets went to Southern colonies, like South Carolina. This bayonet could well be an early southern made copy of a Dutch style bayonet and it almost certainly saw American Revolutionary War service. Early socket bayonets like this are hard to find, and this is a lovely example of a crudely made American copy of a an early 18th Century Dutch socket bayonet.