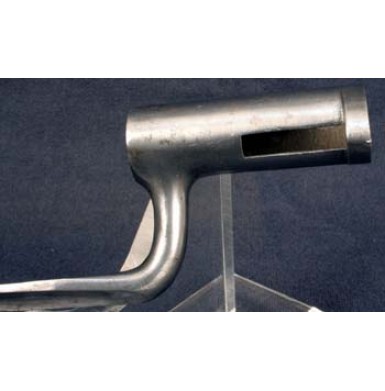 This is one of the rarest US socket bayonets that I have ever had the opportunity to offer. It is a US manufactured socket bayonet for use on the Austrian M-1842 musket with the Laukart latch.

During the American Civil War, the US government purchased hundreds of thousands of Continental long arms to help provide weapons to the giant volunteer army that was raised to restore the Union. While they always tried to purchase complete stands of arms, which included the bayonet and the necessary tools and spare parts to maintain the guns in the field, this was not always possible. Additionally, it was not uncommon for bayonets to be damage or lost once it the field and these bayonets needed to be replaced. As a result the US government contracted for the production of several types of special socket bayonets for use on these various foreign arms. The typical configuration was to have the manufacturer mate the special socket required for use on the weapon with a standard 18” US M-1855 pattern bayonet blade. This is the same thing the US did to replace the many missing and damaged US M-1816 bayonets that were needed to put the thousands of converted US M-1816’s muskets back into the field. The three rarest bayonets produced in the US for use on foreign were for the Prussian M-1809 Potsdam, the Austrian M-1854 Lorenz and the Austrian M-1842 musket with the Luakart latch. This is one of those rare US made Laukart bayonets.

Most bayonet collectors feel that the US manufactured bayonet for the Austrian M-1842 is one of the rarest of US martial, Civil War era bayonets, with only a handful extant. This one is in about excellent condition, and retains the original look of the bright arsenal polish, with a slight light gray color. The odd blue tint to the back side of the blade in the images is an artifact of lighting and background color interference and is not on the blade. The bayonet is full length and quite sharp at the tip. The blade is deeply stuck with a typical US inspection mark. It is clear that the die that stamped it was broken, as part of the S is missing, but it is clear that the stamping goes deeper than the face of the blade where the portion of the letter should be, showing that the mark was not removed by polishing or cleaning. The socket is marked with the alphanumeric rack number N29. The socket has the same overall dimensions and design of any Austrian M-1842 Laukart pattern bayonet socket, with a long slot and high bridge designed to accept and lock on the stud and Laukart spring catch that is found on this pattern of weapon.

This is such a rare bayonet that I have only ever seen one or two for sale. This would be a fantastic addition to any Civil War bayonet collection, especially one that focused on foreign bayonets. It would also be a fantastic addition to any collection that featured Civil War used Austrian arms. I have looked for the opportunity to purchase one of these bayonets for years, and I am extremely proud to be able to offer one, especially in this kind of condition.