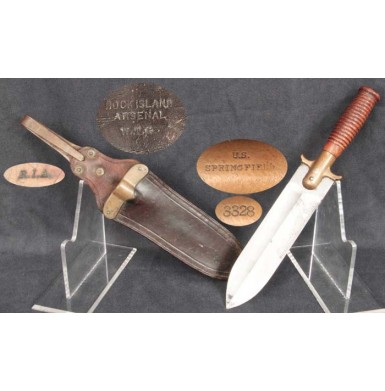 This is a lovely example of the US M-1880 Hunting Knife. The knife was designed as a multi-use implement for the US soldier serving on the frontier, and could be used as a traditional knife, as well as a make shift entrenching tool, and for other light tool or small camp axe type duties. The first knives were produced at Springfield Armory in 1881 and were produced with iron crossguards. These are exceptionally scarce knives and are rarely encountered these days. The second variant was produced in 1882 and for the next few years, and was manufactured with a brass cross guard. The knives had 8 ““ long, 2” wide spear point blades with a peaked spine down the center of the blade. The blade was mated with a 3 7/8” long turned maple hilt which was grooved for a secure grip. The blade and hilt were mated via a brass crossguard and tang, which was marked US / SPRINGFIELD on the obverse and with a serial number on the reverse. The overall length of the hunting knife was 13 9/16”. The knives were carried in brown leather scabbards, which were produced at either the Rock Island Arsenal or the Watervliet Arsenal. The scabbards were originally produced with a leather belt loop. However, this proved unpopular in service and the loops were subsequently replaced with a brass hook, which allowed the scabbard to be attached to the soldier’s belt.

This US M-1880 Hunting Knife is in about FINE condition. The blade is full length and shows only some light sharpening along the edge. The blade retains more than 50% of its original arsenal bright polish, with scattered patches of lightly oxidized peppering and discoloration along the lower edge of both sides of the blade. The brass guard has a lovely, untouched golden patina and is very attractive. The guard is marked US / SPRINGFIELD on the obverse and has the serial number 3328 on the reverse. The maple handle is in FINE condition as well, and is free of any breaks or cracks, with only some light handling bumps and dings present. The leather scabbard rates VERY GOOD+ to NEAR FINE. It is clearly marked on the back: ROCK ISLAND / ARSENAL / W.R.G.. The scabbard was altered at Rock Island by removing the leather belt loop and adding the brass hanger, which is marked on the reverse R.I.A.. The scabbard retains all of its original stitching, which is tight and secure throughout. The leather retains much of its original finish, with only some scattered light flaking and minor crazing. The only significant area of wear is at the brass hook / scabbard joint, where the scabbard was likely to bend and sway when mounted on a belt.

Overall this is a really nice looking and much better than average example of a US M-1880 Hunting Knife. This would be a fantastic addition to any Indian War militaria collection or any collection of military knives. It looks great and display well and is absolutely 100% complete and original.