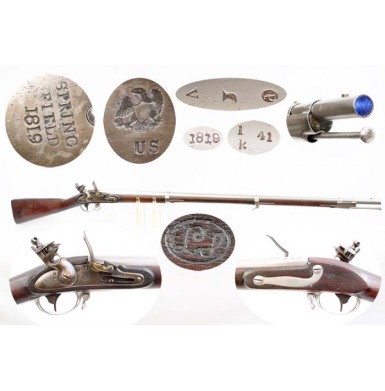 Overall, this is a really wonderful example of a 100% original and correct US M-1816 Type I Musket in its original flintlock configuration. The gun is incredibly sharp throughout and retains excellent markings everywhere. It is a mystery how this musket escaped a classification inspection cartouche during the 1842-45 period, as the condition of this gun certainly warranted it being placed in emergency reserve for issue or conversion, with the only factor making is a “3rd Class’ gun being its year of production. Realistically this gun is probably in better shape nearly 200 years after it was manufactured than many of the flintlock muskets that were examined only a decade after being built. It has to be assumed that this musket was issued to one of the states under the Militia Act of 1808 and somehow escaped being re-inspected, possibly by being liberated from the local arsenal, thus explaining its fine condition with minimal indications of field service. Fine condition original flint 1816s like this don’t come along often, and are highly prized when they are found. This will be a great addition to any serious collection of US martial arms and will no doubt be a gun that you will be very proud to display in your collection.