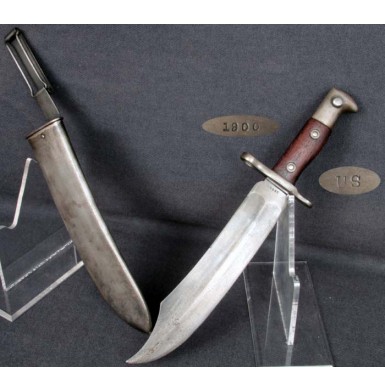 This is a GOOD+ to NEAR VERY GOOD example of the rarely encountered US M-1900 Bayonet & Entrenching Tool, known to collectors simply as the Krag Bowie Bayonet. According to Paul Kiesling’s Bayonet’s of the World, a total of 2,800 of these combination bayonet / entrenching tools were produced at Springfield Armory in 1900, with 1,500 sent to the Philippines and 500 sent to Cuba for field testing. Most other sources place production at only 2,000 units “ all manufactured in 1900. The bayonet was a continuation in of the US Ordnance Department’s long-standing desire to combine multiple field implements into a single multi-use tool. The various M-1873 Trapdoor “Trowel” bayonets produced in the early 1870’s and the subsequent M-1874 combination entrenching tool and bayonet were early attempts to accomplish this goal. While the theory was the combination of the bayonet and entrenching tool would reduce the load a soldier carried while on campaign, the more likely rational was to save money and to only procure one item instead of two. The “Krag Bowie”, like the combination bayonets that preceded it, was a dismal failure in the field. It proved an awkward and cumbersome bayonet in use and a practically worthless entrenching tool. It was simply too small and too light to serve as an effective digging implement. Most of the bayonets saw more service as improvised machetes in the Philippine jungles than they did as bayonets or digging implements. This fact lead to the next major attempt to create a combination bayonet, the series of Krag Bolo Knife bayonets.

This Krag Bowie Bayonet is complete, correct and original in every way. The bayonet blade has a medium dull pewter patina that appears to have been lightly cleaned in the past. The ricasso is clearly marked on the obverse with US and on the reverse with the year of production, 1900. The 8 15/16” long Bowie style blade shows light pinpricking along its entire length, with some deeper light pitting near the Bowie tip, which becomes moderate pitting on the last 1” of the blade. This appears to be the result of poor storage over the years, which is unfortunate considering the rarity of the bayonet. The bayonet has an overall length of 13 “. The standard Krag pattern grip is in fine condition with two lovely walnut grip panels that are free of any breaks, cracks or repairs. They show only light handling bumps and dings. The locking mechanism in the grip is in excellent mechanical condition and works as it should. The cross guard and muzzle ring are in fine condition and have the same pewter gray patina exhibited on the blade. The original metal scabbard is retained with the bayonet and is in GOOD+ to NEAR VERY GOOD condition as well. It has a patina that matches the bayonet and the scabbard is complete and fully functional. The original wire belt loop and swivel are in place and function smoothly and the original ball tip is in place on the scabbard. The blade tension spring inside the scabbard remains tight and holds the bayonet in the scabbard as it should. The obverse of the scabbard shows a couple of very small dings and the reverse is dent free. The scabbard retains none of its original finish, and shows scattered peppering, pinpricking and even some light pitting over its surface. The overall condition of the scabbard is quite commensurate with the bayonet and they match each other well.

Overall this is a very respectable example of a very scarce bayonet from the era of the Philippine Insurrection and the Post-Spanish American War Cuban occupation. With nearly all of the bayonets produced being shipped to one of these two American outposts, the survival rate is quite low, making these bayonets very scarce. Their rarity has caused the price to escalate over the last decade to the point where $2,500 to $3,500 (or even higher) is not uncommon for very nice examples. While this example is not excellent or even fine, it is 100% complete and correct and appears to have seen some actual service. The bayonet and scabbard are fairly priced and are well below what many of these bayonets are priced at today. This is a great opportunity to add a truly scarce bayonet to your collection at a reasonable price.