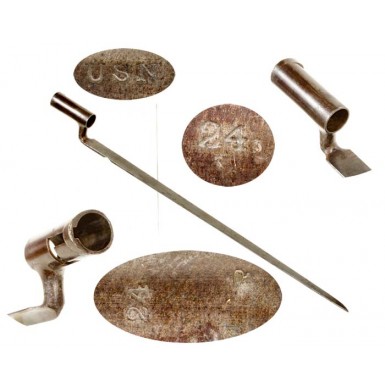 On August 31, 1841 the Navy Department placed an order with the N.P. Ames Company of Springfield (later Chicopee), MA for a percussion breechloading carbine based upon the patents and designs of William Jenks of Columbia, SC. On May 25, 1838 Jenks was granted US Patent #747 for a breechloading percussion carbine with a “mule ear” lock system. The carbine design was .52 caliber and smoothbore. The initial order was for 1,000 carbines with 36” long barrels and a stud for a socket bayonet beneath the muzzle. An angular socket bayonet was delivered with each rifle. Eventually these guns would be re-bored to .54 caliber and be rifled, creating what collectors call the “Jenks Naval Rifle”, however, during their initial naval service they were simply “carbines “ long”. In September of 1841, a second order was placed with Ames for 500 Jenks carbines, but this time it was for the 24” long barreled version. Eventually 4,250 of these shorter guns would be acquired by the navy from Ames, with another 1,000 purchased from E. Remington & Son. The Remington guns were equipped with the Maynard automated tape priming system. No additional 36” “long carbines’ were purchased by the Navy, making them (and their accompanying bayonets) extremely scarce today. Ames delivered all the rifle length arms, complete with bayonets, between 1842 and 1844. During the period that the Jenks carbine system was in use by the Navy, ordnance records rarely distinguished between the longer barreled “rifle” and the standard-length carbine. When the distinction was made, it was usually by referring to the rifles as “carbines “ long”. A December 1858 US Navy Small Arms inventory notes that a total of 5,452 Jenks carbines were accounted for, with 4,093 in the various Navy Yards and 1,359 on board ship. This particular inventory does not differentiate between the two different barrel lengths. In May of 1852, Commodore Matthew C. Perry specifically requested “92 Jenks Carbines “ percussion with bayonets (long)” for his upcoming mission to Japan, but apparently did not receive them. According to Ordnance reports from the Navy during the per-Civil War and Civil War era Navy which are published in James McAulay’s Civil War Small Arms of the US Navy & Marine Corps, “Jenks Carbines “ Long” are noted in the following inventories on the following dates:

The Jenks series of breech loaders appear to have been phased out of significant active naval service by the beginning of the Civil War. While Jenks carbines (with no indication of barrel length) are noted to have been part of the small arms stores of no less than twenty-five US Naval vessels during the decade leading up to the war, wartime inventories show the Jenks carbines were only part of the small arms stores of eleven vessels, including the Ice Boat, the Lancaster, the Mississippi, the Monticello, the Powhatan, the Sabine, the Saranac, the South Carolina, the St. Lawrence, the St. Mary’s, and the Susquehanna.

The socket bayonets provided by the N.P. Ames Company were based upon the US M1816 pattern socket bayonet that had been used on US muskets for more than two decades previously. The bayonet was a friction-fit design with a “T” mortise, cut for a bottom stud, rather than a top stud like the 1816 bayonet. The muzzle diameter of the bayonet was nominally .745” while the 1816 bayonet was nominally .830”. The socket was also shorter at 2 ““ rather than the 1816s longer 3” socket. The bayonet blades were nominally 17” in length with a flat face without a flute. Like the rifles, the bayonets were finished with a lacquer browning process. The top of the socket was marked USN and the rear edge of the socket was usually marked with a number over an italicized P, the mark of civilian naval arms inspector Richard Paine, who inspected for the navy from 1842-1848. A mating number was also stamped to the rear of the mortise cut. This number, which is sometimes found duplicated above the “P” inspection mark, was a mating number, matching the bayonet to the “rifle” to which it belonged. As the bayonets are generally considered interchangeable, these mating numbers are not to match the gun and bayonet due to fit but were rather inventory numbers. A matching number was stamped on the bayonet lug of the rifle. The late Dick Marsden performed an exhaustive review of the available Model 1841 Jenks Carbine Socket Bayonets that are known to exist today in 2002. The results of his study were published in the Winter 2002 Journal of the Society of American Bayonet Collectors. Mr. Marsden determined that there are seven examples of this rare bayonet currently known in collections (both public and private) and he had access to ten of the “rifles”. He found the number “87” is represented twice on the rifles. Additionally, no number above “99” was found on either a bayonet or a gun (the highest bayonet being “95” and the highest gun being “99”). This suggests the bayonets and rifles were only numbered from 0-99 and this system was repeated ten times in order to add up to the 1,000 “rifles’ and bayonets acquired. This is similar to the US Ordnance Department system of the 1820s, that used an alphanumeric mating code with one or two letters and numbers from 0-99. The exceptionally low survival rate of these arms makes the Jenks M1841 “Carbine “ Long” and its accompanying bayonet extremely rare and difficult to obtain.

Offered here is one of the extremely rare US M1841 Jenks Carbine Socket Bayonets, one of only 1,000 produced by N.P. Ames and delivered between 1842 and 1844. In 2002, Mr. Marsden could only find seven examples to study and this bayonet was one of those seven. It can be reasonably surmised that less than a dozen of these bayonets likely survive today. The bayonet is in about VERY GOOD+ to NEAR FINE condition. The socket is clearly marked on the top with the letters U S N and at the upper rear 24 over Richard Paine’s inspection mark of an italicized P. The mating number 24 is also found at the rear of the mortise cut. The bayonet bears no other markings. The bayonet retains about 70%+ of its original lacquer browned finish, mixed with an oxidized chocolate age patina. Most of the remaining finish is on the blade, with the socket showing significantly more finish loss. The socket finish has thinned and worn, showing only some moderate traces of original brown, mixed with surface oxidation and discoloration. To the naked eye, under normal light the bayonet appears to retain much more finish. The bayonet shows small patches of light to moderate surface oxidation with the larger patches being about the size of a thumbnail. This kind of oxidation is not an uncommon condition issue for 19th century naval arms. Due to the large amount of remaining finish the surface oxidation is not horribly objectionable, nor does it have as dramatic effect on the appearance of the bayonet as it would if it were bright. The blade of the bayonet remains full length and is unaltered. The bayonet retains a sharp tip and crisp edges and the socket remains perfectly round. The only condition issue worth noting is a tiny flaw that appears as a surface crack, running about 1" diagonal from the forward edge of the mortise cut, which is clearly shown in the last photo below. This is almost invisible and is mentioned for exactness in condition.

Overall this is an extremely nice example of one of the rarest of all the US socket bayonets and possibly one of the rarest 19th century bayonets from any nation. With only seven to ten extant examples known and less than twelve likely to survive, this is one of those bayonets that you may not see for sale again in the next decade. If you are an advanced US bayonet collector, or an advanced US Navy collector, this is one of those Holy Grail items you might not get another chance to buy. Of course, if you have a Model 1841 Jenks “Long Carbine” (Naval Rifle), this might be your only chance to get a bayonet for your rifle. This is a really rare bayonet in nice condition with very nice marks that will be a great addition to any serious collection.