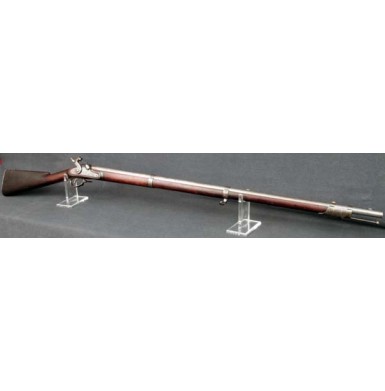 This is an enigmatic rifle musket that it has taken me some time to figure out exactly what it is, and to some extent still leaves me scratching my head a little bit. The gun is clearly a handmade military style rifle musket, which is completely unmarked except for the Roman Numeral assembly mark XX found on the interior of nearly every part, and the initials J L stamped on the inside of the triggerguard. The gun is 55 ““ in overall length with a 40” barrel which is .58 caliber and rifled with 7-groove rifling with a very fast rate of twist, appropriate for use with round balls, not conical projectiles. The rifling appears to have been cut on a machine that had cut rifling for the M-1817 “Common Rifle” or possibly the M-841 “Mississippi Rifle”. Interestingly the gun relies upon the original brass blade front sight that was mounted on the upper barrel band and makes no accommodation for a rear sight “ truly odd on a rifled musket. There is a socket bayonet lug on the upper side of the barrel, near the muzzle. The muzzle diameter and stud placement allow the gun to accept a standard US M-1855/70 socket bayonet. The rifle musket has a civilian style flat lockplate with a very slight bevel and a civilian style hammer, likely intended for use on a hunting rifle or shotgun. The iron furniture appears to have been salvaged from some US military muskets, with the barrel bands of the US M-1816/22 type, the side plate reminiscent of the M-1847 musketoon and carbine family and the buttplate much like that of an M-1817 “Common Rifle”. The barrel is retained by three barrel bands, which are secured to the stock via pins, instead of the more typical band springs. The ramrod is truly unique with a ball shaped tip and a thin shank. The rod is clearly old and period, and I believe original to the gun. It has an iron ball shaped tip, which is welded to the thin iron shank, which is threaded to accept cleaning appendages. The stock has a very thin wrist and is somewhat smaller and thinner overall than a typical US musket stock. The comb of the stock ends sharply and has a somewhat unique profile. Initially, the lack of markings and the Roman numeral assembly marks lead me to feel that this might be Confederate assembled rifle. The odd rifling style helped to reinforce this theory. However, extensive research could reveal no known Confederate style rifles that resembled this gun. What the research did reveal is that the gun has many features that appear to by typical of the small gunmakers and gunsmiths of Pennsylvania. The gun is nearly dimensionally identical to the Henry Leman rifle musket that I am currently offering for sale. It also has the same style of barrel bands, retained in the same manner, via pins instead of band springs. The stock profile is similar to the Leman rifle musket, as well as the profiles of other Pennsylvania makers such as J Henry and Fredrick Lins. The barrel and bolster profile are quite similar to that of the Leman rifle as well. The unmarked gun (except for the assembly marks) and the fact that it uses a variety of what appear to be recycled US musket parts makes it likely that this was a prototype rifle musket produced in hopes of securing a contract from either the US Ordnance Department or possibly one of the Northern states. It might have been a shop model that was used to try various ideas (like the pinned bands), prior to moving forward with a more standardized production run. One way or another, the rifle musket is clearly unique and possibly a one of a kind example.

This Unmarked Pennsylvania Style Rifle Musket is in NEAR FINE overall condition. The gun appears to be 100% complete and correct, although there is no other known rifle musket to compare it to. The unmarked, slightly beveled lock plate is nearly mortised into the stock and the civilian style hammer functions correctly. The gun is mechanically fine, and functions well on both half cock and full-cock. The metal of the gun has a medium pewter patina, with scattered patches of darker age staining and discoloration. The metal is mostly smooth, with scattered patches of minor peppering and pinpricking, as well as some small patches of scattered light pitting “mostly around the breech and bolster area. The bore of the rifle is in FINE condition and is mostly bright with excellent, sharp rifling. The bore shows only some light scattered pitting, mostly in the grooves and primarily near the muzzle. It also shows some light dirt and debris, that should easily clean out. The gun retains both of its original sling swivels, and what I feel is its original (although strangely shaped) ramrod. Like the Leman rifle muskets, the gun is assembled with a mixture of round head and flat head screws that are handmade. The stock is in NEAR FINE condition, and is complete and full length with no breaks or cracks. There is a very tiny chip of wood that has been repaired at the front of the lock mortise, it appears the small piece of wood chipped off as a result of improper lock removal and was the glued back on. It is a very minor issue, is barely noticeable and is mentioned for exactness. The stock shows some indifferent fitting between the wood and metal, with most of the parts fitting well except for the barrel tang, which is slightly narrower than the groove cut in the stock. The stock shows a significant number of bumps, dings and minor scrapes from handling and use. The stock shows no abuse, but has clearly seen some handling and use over the years. The stock has the initials H D, lightly carved in the reverse of the butt.

While it is not absolutely definite that this is a Pennsylvania made rifle musket, I feel that all of the reasonable evidence points in that direction. It could be a previously unidentified Confederate rifle, but I think that chances of that are fairly slim. This is a very nice looking, complete and correct example of the many strange long arms manufactured by various small gunmakers during the early days of the Civil War, that helped to fill a void that it would take Springfield Armory and the larger US gun contractors about two years to be able to fill satisfactorily. If you collect “Pennsylvania School”, military style long arms or simply want to add to your advanced collection of secondary marital rifle muskets, this is wonderful example that is surely worth some additional research.