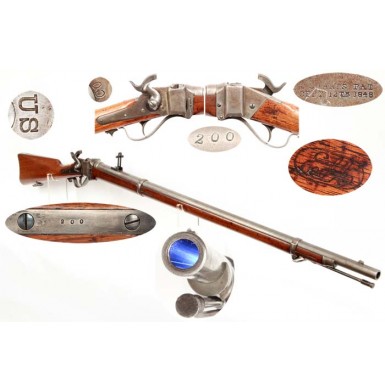 At the end of the American Civil War, the US Ordnance department found itself with stores of hundreds of thousands of obsolete muzzle loading muskets, as well as thousands of obsolete, percussion ignition breechloading carbines. With a limited budget, the Ordnance Department proceeded to address the problem of having these obsolete arms to breechloading, metallic cartridge arms. Initially a .58 rimfire cartridge was adopted for use with the altered muzzle loading muskets, but by 1866 a more satisfactory, centrally primed cartridge, officially designated the 50-70 Government, was adopted. This same cartridge was also usable in altered Sharps rifles and carbines, and over the next few years, the Ordnance Department undertook to have many of these guns converted to accept metallic cartridges. As the Sharps Rifle Manufacturing Company had already been working on a system to alter the straight breech M-1858 and M-1863 pattern arms to accept cartridges, it seemed appropriate that they do the work required to make the obsolete percussion carbines and rifles serviceable. As the alterations began to take place at Sharps, it became obvious that those carbines and rifles with worn bores that measured more than .5225” needed to have their barrels re-lined in order to maintain any level of accuracy. The estimate to perform this work at Sharps was $1.5875 per barrel. The Ordnance Department was not in the position to absorb these additional expenses, and did a cost analysis of having the barrels lined at Springfield Armory. The cost was radically lower at Springfield, and by the end of March, 1868 it was determined that Springfield would perform barrel re-lining instead of Sharps. This cost analysis caused the Ordnance Department to reevaluate the cost Sharps was charging for alterations, and it was discovered that Springfield could perform the alterations at a lower cost. The comparison of costs between using Sharps to perform the alterations or doing the work at Springfield probably weighed heavily on the decision to produce what would be known at the M-1870 Type II Sharps rifles at Springfield. The majority of the alterations performed between 1867 and 1869 had been to carbines, with very few rifles altered. However the Army decided that it wanted to issue the 50-70 Sharps rifled musket in 1870. A minimum of 1,300 of these rifles were required for the Army field trials. The Sharps Rifle Manufacturing Company did receive a contract to convert 1,000 older percussion Sharps rifles for the trials, but the last 300 guns were essentially manufactured at Springfield. The first 1,000 rifles were issued to 16 different infantry and 2 artillery regiments, in numbers ranging from as few as 20 to as many as 100 rifles per regiment. They were issued on the company level, alongside US M-1870 Springfield rifles and M-1870 Remington Rolling Block rifles, all chambered for the same 50-70 cartridge. As the first 1,000 rifles were delivered, and started to see service in the field, a number of improvements and modifications recommended. The improvements primarily revolved around an improved operating lever for the action. The original levers did not provide enough “snap” to adequately eject spent cartridges on a consistent basis. As the older levers could not be altered to the new specification, 1,300 of the new levers were ordered from Sharps. The first 1,000 levers were used to modify the original rifles altered by Sharps, and the remaining 300 levers were to be used for the guns that would be assembled at Springfield. At the same time, the Ordnance Department purchased 300 of what would become known as the M-1874 breechblock from Sharps. Springfield utilized these new M-1874 pattern blocks, the newly modified levers, and parts of their own manufacture (or modification) to assemble the 300 trial rifles. Like the guns that had been altered by Sharps, these new Type II rifles were chambered for the 50-70 Government cartridge. The guns had 35” barrels that were secured to the forend with two barrel bands. Springfield modified 300 existing, obsolete musket stocks to obtain the buttstocks and forends. The buttplates were also surplus Civil War era musket buttplates. The breechblocks, hammers, locks, levers, trigger plate and lever catch were color case hardened, while the rear sight, screws, lever hinge pin, firing pin, extractor and barrel band springs were heat blued. The balance of the metal parts, including the barrel, barrel bands, butt plate, ramrod and sling swivels, were left in the white; better known as National Armory Bright. These guns were the very first firearms to use the new M-1874 breechblock, and were the first cartridge Sharps that did not utilize an altered percussion action. These trial rifles were serial numbered in their own unique sequence from 1 to 300, with the number appearing on the left side of the barrel breech and on the receiver tang. The receivers bore Sharps patent markings, and typically no other markings. The repurposed musket buttplates bore their original U.S. mark, and the left side of the buttstock bore the inspection cartouche of Erskine S. Allin, the master armorer at the Springfield Armory. These incredibly rare experimental Sharps rifles were issued during 1871 and 1872 and most of them saw service with the army on the frontier. Many of the Type II rifles were issued to the 13th US Infantry, which was deployed to deal with Indian issues in Wyoming, Utah and the Dakota Territories during the early 1870’s. The regiment was eventually recalled to the East and was stationed in New Orleans in very late 1874. The overall field performance of the M-1870 Sharps rifles (as well as the Remington rifles) was not as good as the M-1870 Springfield Trapdoor. As a result of the field trials, a new pattern of Trapdoor, chambered for the new 45-70 Government cartridge was adopted in 1873, and the brief experiment with the 50-70 cartridge and altered Sharps firearms came to an end. By 1875 the guns were considered obsolete and were already being sold as surplus by the US government.

This particular US M-1870 Type II army trials breechloading Sharps rifle (Flayderman 5F-037) is in about VERY FINE condition. The gun is 100% complete and correct in every way. The gun is marked on the left side of the receiver in two lines: SHARP’s PAT / SEPT 12th 1848. The left side of the barrel and the receiver tang are serial numbered 200. The buttplate bears the usual U.S. mark on the tang. The right side of the receiver is stamped in large, capital letters C O, just forward of the hammer, in a position where the hammer would cover the letters when it was in the down position. The meaning of the marking is not clear, but it may indicate that the gun was eventually sent to the Colorado Territory in the later part of the 1870’s, after the US M-1873 “Trapdoor” rifle was officially adopted, and the guns were considered obsolete. Colorado Territory marked Spencer M-1865 carbines are known, as 500 of these guns were sent there during 1868. The rifle is marked with a crisp ESA cartouche on the left wrist of the buttstock. The gun is extremely crisp and sharp throughout, with great lines and edges. The breechblock retains about 10%+ of its original vivid case coloring, most of which is in the protected areas. The balance of the block has a medium pewter patina, with some lightly oxidized brownish age staining. The hammer retains about 30%+ of its case coloring, with the balance being a smoky gray and silver patina. The lock is smooth, and the breechblock shows some light pinpricking from the corrosive primers of the time. The action works flawlessly and is very crisp and sharp. The hammer functions perfectly on all positions and responds to the trigger, as it should. The breechblock moves smoothly and the lever operates the block and ejector, as it should. The remaining case hardened parts show only the most minor traces of coloring and have a smoky gray patina. The fire-blued screws all retain good amounts of their original finish, varying from about 20% to about 70% depending on the screw. The blue loss is mostly due to simple age fading. The screw heads remain crisp and in fine condition throughout. The rear sight retains about 60% thinning blue and the barrel band springs retain about the same amount of vivid blue finish. The balance of the gun remains “in the white” as it should, with a dull pewter patina, which is simply the result of the original National Armory Bright finish fading with age and exposure to moisture in the air. The barrel is free of any pitting and shows only the tiniest patches of lightly oxidized age discoloration and some minute patches of light pinpricking. The bore of the rifle rates NEAR EXCELLENT. It is brilliant and bright with excellent rifling. The bore shows only some minor frosting in the grooves as well as some small patches of minor pinpricking. The bore condition suggests the rifle would be a real tack driver at the rifle range. The gun retains its original, full length cleaning rod, both original sling swivels and the original front sight/bayonet lug to accept an angular socket bayonet. The original, and fully functional long-range rear sight is present as well. The stock of the rifle rates about FINE overall. The buttstock and forend both show an old, protective coat of varnish, which could be removed if desired, but has helped to preserve the stock nicely. The stock is solid and is free of any breaks, cracks or repairs. It retains strong edges throughout, and shows no signs of having been sanded.

Overall, this is a really wonderful example of a very scarce US M-1870 Type II Sharps trials rifle. With only 300 of these rifles produced, these guns are very rarely found for sale. This one is 100% complete, correct and original and is a very important historic weapon. The actions for these guns represented the first use of what would become the famous falling block design of the Sharps M-1874 rifle; the most famous of the “buffalo rifles’ to be produced. For any serious Sharps collector, this gun is a very important historic bridge between the percussion era and cartridge era. The condition of the bore would allow this to be great candidate for long-range black powder shooting as well. I am positive that you will be very pleased when you add this very rare and high quality Sharps military rifle to your collection.