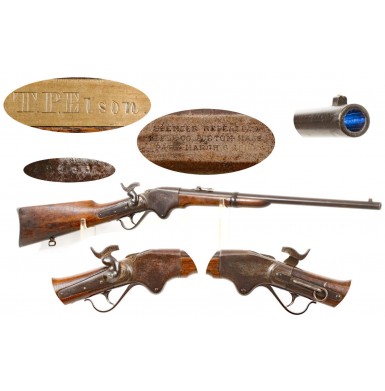 There is probably no single weapon of the US Civil War that is more representative of the overwhelming force of industry and technology brought to bear by the North against the South than the US Model 1860 Spencer Carbine, more commonly known simply as the Spencer. Various single-shot, breech-loading percussion carbines were the standard issue US cavalry long arms prior to the war, and most of these guns remained in heavy use through the closing days of the war. However, the Spencer firmly established the era of repeating carbines firing metallic cartridges by the end of 1863. The “horizontal shot tower” as some affectionately (or sometimes derisively) referred to the Spencer, was in essence the original assault rifle. For the Confederates the gun was turned against, it was “that damn Yankee carbine that you load on Sunday and shoot all week!” While the Henry Rifle offered a greater number of cartridges in the magazine, the .44RF Henry round was essentially the ballistic equal to a pistol cartridge. The .52 caliber 56-56 RF Spencer round was much more comparable to a real service rifle load and delivered far greater downrange stopping power. The Spencer was also very fast to reload, with a 7-round tubular magazine that fed through the buttstock, troopers could carry pre-loaded magazine tubes and reload almost as quickly as a modern shooter exchanges them on a modern magazine fed rifle or pistol. Even though the Spencer shooter did have to manually cock the hammer for each shot (the Henry had a speed advantage here, since the toggle action that operated the bolt to eject and load a new round also cocked the hammer), the robust design and powerful cartridge combined to make it the most prized, and most feared, cavalry long arm of the American Civil War. Roughly 50,000 of these carbines were produced (in the 11,000 to 61,000 serial number range) between 1863 and 1865 and almost all of them saw service during the war. After the war, many were altered and modified at US armories and many remained in service on the frontier through the early 1870s.

This is a NEAR VERY GOOD example of the US Model 1860 Spencer Carbine. The gun is 100% complete, correct and original in every way, and remains in untouched and well used condition. The gun is an un-altered example with no post-war modifications. There has been no Stabler magazine cut-off added and the original 6-groove .52 caliber bore remains intact. The action works perfectly, both in terms of cycling the breech and cocking and firing the gun. The gun also retains its original sling bar and ring on the reverse of the receiver, as well as the original  buttstock sling swivel. The original rear sight is in place and flips up as it should, and the original front sight is present as well, although the brass blade is worn down. The original and correct Civil War period magazine tube is in place in the butt of the gun and functions as it should. The tube is complete and free of any of the commonly encountered breaks or cracks to the thin metal.

The gun retains relatively clear and legible markings on the receiver, the top of which is roll stamped in three lines:

The serial number 42560 is very stamped into the rear of the upper receiver, in front of the buttstock joint. The matching serial number is present on the barrel, under the forend. Based upon Spencer serial numbers in the same range, as listed in the four volume set of serial number books published by Springfield Research Service, this gun was likely in the field by the fall of 1864. The closest serial numbers to this gun that is listed in these sources are, #42539 (21 numbers below) and #42608 (48 numbers above), both of which was issued to Company G of the 3rdIowa Cavalry and were shown in service with the 3rdIowa Cavalry during 1865. However, the issue of guns was not done by consecutive serial number, and in some cases consecutive numbers were issued to completely different regiments. The carbine has an applied brass plate on the top of the stock comb, forward of the buttplate tang. The plate was most likely added in the post-Civil War period, as such a modification of government property would have been punished during the war. It was possible, however, for soldiers to purchase arms at the end of the war when they were discharged. The brass plate is engraved with the initials T.P.E. followed by the rest of the last name in lower case letters, reading: lson. A search of records on the Civil War Data web site revealed only three men with the first initial “T” and the last name of  “Elson” who served during the war. Of those, one was listed with the middle initial “P”. This man was Thomas P. Elson, who served in Company I of the 49thMissouri Infantry, enlisting on September 15, 1864. It is unlikely that he would have been issued this gun, so if he was the owner, he may have acquired it after the war. The other two men named “T Elson” were 19 year old Thomas Elson who enlisted in F troop of the 8thNew York Cavalry on August 7, 1862 and died of disease on April 11, 1865. It seems unlikely that he would have had the opportunity to add the plate to a gun that was issued to him. The final person is Tunis Elson, a 52-year old Ohio resident who mustered into Company I of the 69thOhio Infantry on April 1, 1862 and dying of disease in Nashville nine months later on November 1, 1862. He was certainly not the man associated with the gun. Further research into the lives and service of the two men named Thomas Elson may prove fruitful.

As noted, the gun is in about NEAR VERY GOOD condition overall. It has a very attractive, untouched, thick plum-brown patina over most of the metal, showing surface oxidation, some scattered roughness and some areas of light pitting. Much of the  metal remains smooth with this thickly oxidized patina, while some patches of pinpricking, light pitting and small areas of more moderate pitting are scattered here and there on the metal. Only the top of the receiver shows any indication of having been cleaned, likely by a collector who was trying to make the receiver markings more legible. As noted, all of the various original small parts remain in place, from the front and rear sights, to the sling swivels and the magazine tube. The bore very good 6-groove rifling and rates about VERY GOOD. The bore is partly bright, with some moderate oxidation, scattered light pitting and moderate erosion. The stock is in NEAR VERY GOOD condition as well. It is not typical to find a Civil War issued Spencer cavalry carbine with visible cartouches, as they were normally obliterated by wear in that area from the carbine sling and swivel. This gun is no exception and no visible cartouches remain on the butt. However, a single capital M sub-inspection mark is present on the left barrel flat where it meets the receiver. The buttstock of the carbine is solid and is free of any breaks, cracks or repairs. It is not uncommon to find Spencers with significant cracking in the buttstock due to this structural weakness, and it is nice to see one without that problem. Both the buttstock and the forend shows a significant number of bumps, dings, rubs and mars, all the result of service and use in the field. Both the stock and forend remain relatively crisp and show no indications of sanding or other forms of abuse, only real world handling and use. The overall condition of this Spencer is somewhat better than the typical well-worn Spencer carbine seen for sale these days.

This is an attractive Spencer with a lovely untouched look that is 100% complete, correct and original. The gun is in its original Civil War configuration and has no post-war alterations, which is a nice bonus. This gun would be a solid addition to any Civil War carbine collection. The nameplate on the top of the butt is interesting and is worthy of some addition research to see if the man who carried the gun can actually be identified. A Spencer carbine is an essential addition to any Civil War collection. Even if carbines are not your thing, no collection of Civil War arms is complete without a Spencer, and if you were to only have one Civil War carbine, no other one is the carbine most associated with the American Civil War.