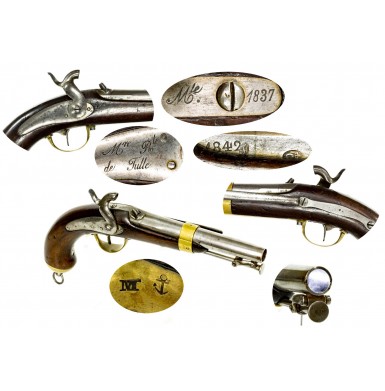 In 1837 the French Marine Service  (including the French navy and associated maritime troops) adopted a new handgun, which would be both a series of firsts and a last for that service. It was the first percussion ignition handgun adopted by the French that was not a percussion alteration (or “transformation”) and would also be the last French maritime single shot pistol as well. The gun replaced the M1816 and M1822 series of flintlock pistols that were previously in service and introduced the back action percussion lock to French military weapons. The simple and elegant back action mechanism would subsequently be adopted in 1840 for French military long arms as well and would remain the standard action system until the end of the percussion era.

The streamlined, single-shot, muzzleloading pistol was nominally 11 ½” in overall length with a 6” round barrel that terminated in a patent breech, bringing the overall length from muzzle to breech plug tang to about 6 ¾”. The barrel was secured to the stock with a single barrel band and screw through the breech plug tang. The pistol was smoothbore and was the first reduced caliber French military handgun at 15.2mm (nominally .60 caliber) rather than the previous French military handgun standard of 17.1mm (nominally .67 caliber). Only the Gendarmerie (police) pistols of the Models 1763 and AN IX had previously been produced in this smaller caliber. The pistol introduced the captive swivel ramrod that had become popular with many of the world’s military for use on handguns and some cavalry carbines during the 1830s and would remain so through the 1850s. The iron parts of the pistol were finished bright. The guns were primarily brass mounted with single brass barrel band secured to the triggerguard via a strap on the underside of the stock. The triggerguard and buttcap were also of brass, while the gripstrap, side plate and ubiquitous naval belt hook were of iron. A swiveling iron lanyard ring was mounted in the bottom of the butt cap as well. The one piece walnut stock was of a traditional form that allowed the pistol to be utilized as a club after its single shot was fired. The pistols were produced at the usual French arsenals, including Châtellerault and Tulle and in 1849 were replaced by a slightly stronger version of the handgun that was designated the M1849 which was essentially the same gun with some parts like the hammer strengthened, and a front and rear sight added. The sights were important as the improved version was rifled, and in many cases the older M1837s were also improved by rifling as well. Both the M1837 and the later M1849 remained in service with the French Marine Service until they were superseded by a major technological improvement, the Model 1853 Lefaucheux revolver in 12mm pinfire.

The French M1837 Marine Pistol offered for sale here is a FINE condition exampled that is 100% complete and correct in every way and is extremely attractive. The back action lock in marked in script in two lines: Mre Rle / de Tulle (Manufactured at the Royal Arsenal at Tulle) and the left side of the breech is dated 1842, indicating production in that year. The breech plug tang is marked Mle 1837 in script, identifying the gun as a Model 1837. The barrel and furniture show a variety of French inspection, controller and viewer marks, including the marine M and {ANCHOR} on the buttcap. Additional inspection marks are found in the wood as well, behind the lock and on the reverse of the grip. The steel and iron components of the pistol have a medium pewter patina with scattered flecks and small patches of scattered surface oxidation and age discoloration. The metal is smooth and free of any pitting, although there are some tiny, scattered areas of minor surface roughness here and there. The lock remains mechanically excellent and functions crisply on all positions. As is typical of French percussion military arms, the half cock notch is a safety position that is barely raised off the percussion cone (nipple). The swivel ramrod remains intact and functions as it should. The bore of the pistol is in FINE condition as well and is mostly bright with only some scattered patches of surface oxidation and discoloration. The bore shows no significant pitting but does show some scattered pinpricking. The brass furniture has a lovely mellow golden mustard patina that is quite attractive. The stock of the pistol is also in FINE condition. The wood shows no signs of having been sanded and is free of any breaks or repairs. The stock does have a small hairline grain crack running from the front edge of the lockplate to the barrel channel, but this is tight and does not appear to be structural. The stock shows some scattered minor bumps, dings and handling marks, but shows no signs of abuse of mishandling.

Overall, this is a crisp and attractive example of the first and last of the French Marine pistols produced as percussion weapons. The gun bridged the gap between the percussion altered flintlock pistols that it replaced and was itself replaced by the self-contained metallic cartridge revolver. This gun has escaped any of the M1849 era upgrades and remains in its original smoothbore, unsighted configuration. The pistol functions crisply, retains its original belt hook and would be a very nice addition to any collection of mid-19th century European military small arms.