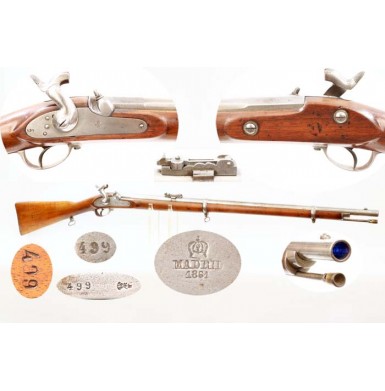 This is one of the rarest of the Civil War import rifles that you will ever see available for sale. It is a Spanish made copy of the British P-1856 Enfield “short rifle”, and there is now very strong evidence that a small number of these guns really did cross the ocean to see service during the American Civil War. In his seminal work “Civil War Guns’ William Edwards classifies this rifle as being used during the war, but hypothesizes that it was used by US troops. In the best current work on Civil War used imported guns, Firearms From Europe Second Edition by Hartzler, Whisker, Yantz & Noe, strong documentation is provided that these may well have been purchased by the Confederate government. In a letter sent to Theodore Lewis (a CS arms purchasing agent), dated July 19, 1861 from CS agents W.G. Betterton & J.E. Chalard. 6,500 “Spanish Enfields’ were reported to be in Havana, Cuba and ready for shipment to the Confederacy at a price of $13.00 per gun. However, the paper trail does not end there. While this letter does not confirm the importation of the guns, only their availability, the following is concrete evidence that at least a handful of these guns entered America, and were eventually sold as surplus by the Federal government. Whether these surplus guns were US purchases or captured CS purchases we do not know, but this new research proves beyond a shadow of a doubt that at least a few of the Spanish made the rifles made landfall in America. The following documentation comes from the National Archives, and was kindly provided to me by Civil War import arms researcher and author David Noe. All of the following comes from government publication R6 156-124, better known as Abstract of Reports of Sales of Ordnance Stores: 1864-1907. Within these reports the following listings were found for:

The information above indicates that for whatever reason, the United States government was in possession of at least 392 “Spanish Enfields’ after the conclusion of the American Civil War. However, there is some more new evidence that helps establish even further the connection between Spanish Rifles and the Confederacy. A number of long-time collectors and researchers have long postulated that the Confederacy received at least two batches of these Spanish rifles. The first batch in late 1861 or early 1862 has always been associated with the famous Orphan Brigade from Kentucky. The Orphan Brigade was a collection of regiments from Kentucky that were mustered into Confederate service. Because the state of Kentucky never officially joined the Confederacy, these regiments were considered “orphaned” as these soldiers fought for the Confederacy without the support of their home state. The brigade included the 2nd, 3rd, 4th, 5th, 6th & 9th Kentucky volunteer infantry regiments. These guns are inevitably dated 1861on the lock and have a serial number under 500 on the lock, stock and breech. The second group of rifles appears to have entered the Confederacy in late 1863 or 1864 and are 1863 dated. These guns have higher serial numbers, typically in the, mid 3,000 to mid 4,000 range. We have direct documentation of at least some of these later imports from the Official Records of the War of Rebellion. In a letter dated December 22, 1863, CS Major General Bankhead McGruder reported from his headquarters in Texas that “300 Spanish Rifles’ had been recently received. These would have likely been the 1863 dated guns that collectors encounter today. However, the O.R.’s shed little light on the earlier importation of the guns and this is what I have spent some more time researching. The association with the 1861 dated Spanish Enfields and the Orphan Brigade originated with an ID’d Spanish M-1857 rifle that is concretely attributed to a member of Colonel Hiram Hawkins 5th Kentucky infantry. Hawkins helped to establish the 5th Kentucky Infantry, CSA and eventually became the Colonel of the Regiment. Hawkins also helped to outfit the unit out of his own pocket, including the purchase of a number of imported rifles. While no history of the unit officially identifies these guns, there is much circumstantial evidence that there were a number of Spanish Enfields included in that purchase. In addition to the ID’d extant example, there have been a number of the Spanish Enfields that have surfaced in Kentucky, and typically with a strong provenance and family story of Confederate Civil War use. These guns tend to appear in two states of condition: quite good or fairly rough. This is easily explained by the fact that the original 5th KY was mustered out of service on October 20, 1862. The unit was then reformed and the original members were offered the option to go home with an honorable discharge, re-join the newly reformed 5th KY or join another of the many CS units that were being formed in Kentucky at that time. This explains the very good condition guns, as they likely went home with the soldiers who opted out (the ID’d gun in a private collection has this story associated with it). The guns of the men who stayed to fight further would necessarily show significantly more wear than the guns that went home in the fall of 1862. The final piece of the puzzle as to why Hawkins purchased Spanish guns was recently revealed while doing some research on the Orphan Brigade “ that puzzle piece is William Preston. Preston, who would eventually serve as the Division commander for the 5th KY, was a Kentuckian who had a long pre-Civil War political and military service record. Preston served with distinction in the Mexican War as Lt. Col of the 4th KY volunteers. After the war he entered politics and became a very powerful and well-known Whig politician in Kentucky. When the Whig party dissolved, Preston joined the Democratic Party and threw his political support to Democratic Presidential candidate James Buchanan. After his election as President, Buchanan repaid Preston by making him the Minister to Spain, and for the next few years Preston was based in Madrid, Spain. In fact, Preston was on his way back to American when the war broke out. A quick search of the Official Records shows that with the coming of the war, the Confederate government relied on Preston to help them establish contacts in Spain for the acquisition of arms. While Preston was skeptical about the availability and quality of Spanish arms, he appears to have been more than willing to help the Confederacy obtain whatever arms were available from Spain. Additional records reveal that Preston returned to the southern states via Cuba. This dovetails with the letter from Cuba and the time line works out well. All of this circumstantial evidence provides strong support for the stories about Confederate used Enfield pattern rifles that were manufactured in Spain.

The Spanish M-1857 Enfield Rifle offered here is one of those early, 1861 dated guns with a low serial number, under 500. The gun is in about FINE condition overall. The lock is smooth with a lovely pewter gray color with traces of oxidized plum brown patina, and works well on all positions. It is marked with the serial number 499 to the rear of the hammer and with the typical Spanish marks forward of the hammer: (CROWN) / MADRID / 1861. The interior of the lock is also numbered 499. The left angled breech flat is marked with Spanish proof marks, as well as the matching serial number 499, which matches the one on the lock. The bottom of the breech plug tang is also numbered 499. The obverse stock is also marked with the number 499, which is stamped vertically in the middle of the butt. The gun retains its very unique long-range rear sight, which is attached to the barrel by clamping, rather than being screwed or soldered. These odd sights are often missing when these rare guns are encountered today. The sight is in very good condition and fully functional. The barrel has the same pewter gray patina found on the lock and also shows some scattered patches of slightly darker, oxidized age discoloration. The barrel is mostly smooth over most of its surface, with only some lightly scattered peppering and pinpricking present scattered here and there. The breech area of the rifle shows more moderate pinpricking, the result of the caustic wear from the mercuric percussion cap flash, is really in very nice shape with little to complain about in terms of the condition of the metal. The bore of the gun is in about VERY GOODcondition, and retains strong, visible rifling throughout. The bore is dark and dirty and shows some light to moderate pitting scattered along its entire length. A good scrubbing with a bronze brush would probably improve the condition of the bore to at least some degree. The bore measures about .577, and is nominally 25 bore, just like a typical P-1853 Enfield. The gun retains its original front swivel in its correct position on the rear most barrel band, and its original rear swivel in the toe of the stock, at the rear of the iron triggerguard tang. However, both of the protective screw retention nuts are missing from the barrel band tension screws. The original and correct ramrod is present in the channel under the barrel. The rod is full-length, and retains fine threads at the end. It also retains the original brass band around the tip, which was intended to protect the rifling when the cartridge was rammed down the bore. The butt plate and the balance of the iron hardware have a similarly grayish pewter patina as the barrel, showing only some lightly oxidized brownish discoloration, and some lightly scattered surface pinpricking as well. The only part of the rifle that does not appear to be original to it is the front sight/bayonet lug, which appears to be a more recent replacement. The sight is a little too boxy with edges that are too sharp. While it matches the rifle well and would probably go unnoticed at first glance, I think it was a more recently added sight with a taller blade for someone who was shooting the rifle, and was then subsequently field down to a more appropriate height. The sight in no way detracts from the display of the rifle and the photos below show that it matches well, but it is not original. The rifle is mechanically EXCELLENT and functions perfectly on all positions, with the hammer and trigger action remaining very crisp. The stock is in about FINE condition as well. The stock is very crisp and sharp, and does not appear to have ever been sanded. The edges remain quite crisp and sharp with no rounding to them. The stock has the normal minor bumps and dings from service, but shows no abuse or serious damage. As mentioned before, the obverse butt is marked with the serial number 499, matching the balance of the rifle.

Overall, this is one of the nicer examples of one of these rare Spanish Enfield rifles that I have ever had the opportunity to offer. I have had a total of eight Spanish Enfields in the past 13 years or so, and only four of which were the early, 1861 dated guns. This is a very nice looking and displaying rifle, that retains both the original rear sight and the original ramrod “ both parts that are often missing from these guns. In, of the guns I have owned, this is only the fourth to have retained the correct, original ramrod. These Spanish contract rifles are a real rarity that deserve a special place of honor in any advanced collection of Civil War import arms, especially a collection that focuses on Confederate imports. The last one of these I had sold fairly quickly, so don’t miss your your chance to get one of these very scarce rifles to add to your Confederate import weapons display.