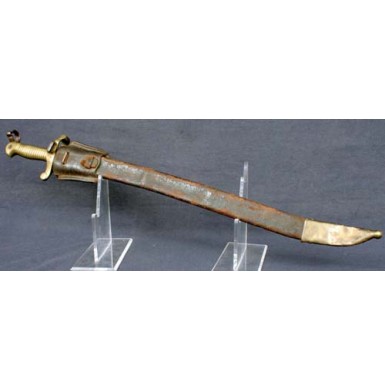 This is a really lovely example of one of the rarer US saber bayonets of the Antebellum period, the US M-1841 Type I Saber Bayonet better known to collectors and historian as the SNELL Bayonet. This style of bayonet is illustrated in the classic bayonet reference books as #67 - Hardin, #976 “ Kiseling Volume IV and #2 page 206 “ Janzen. These bayonets were manufactured for use on the 1,631 US M-1841 Mississippi Rifles that were altered in the spring of 1855 at the Harpers Ferry arsenal to accept the new .58 Mini” bullet ammunition. Harpers Ferry master armorer James H Burton had developed the ammunition. These rifles were further modified by adding a screw-adjustable, folding rear site that allowed increased accuracy out to about 600 yards. The rifles that had these site installed were modified to accept a saber bayonet by adding a cut near the muzzle for the bayonet to lock into. The bayonet was manufactured with a folding muzzle ring that passed over the front site and eliminated the need for a lug to be attached to the rifle. This simple modification was abandoned on the second set of rifles modified in 1855. These rifles received a more conventional long-base, long-range rear site and were fitted with a saber bayonet lug on the barrel. The 1,649 rifles so altered also had their forends slightly shortened and the front barrel band shortened as well to accept the more traditional saber bayonet. This great example of a Snell recently surfaced in the Middle Tennessee area, near the Kentucky state line. The bayonet and scabbard are in untouched condition and still have a light coating of dirt and grime that should probably be carefully cleaned off. They even have some minor flecks of old white paint on them “ which is quite common with attic found relics. These souvenirs of the by-gone era were so inconsequential to many people around the turn of the century they literally left them where they were laying while they painted their homes and took no care to cover or protect them! It is not uncommon for Mississippi Rifles and their related accessories to be found in the South and former Confederate States. Thousands of Mississippi Rifles were sent to Southern arsenals in the pre-Civil War years to arm the state militias, and Secretary of War John B. Floyd sent an additional 10,000 Mississippi Rifles south in December of 1859 to help make sure the South would be armed for what the forthcoming conflict that he predicted was not far away. It is interesting to note that Floyd was the senior commander at Forth Donelson in Dover, TN when that Fort was surrendered to the Union Army in February of 1862, and this Mississippi Rifle bayonet is from that very area!

Since only about 1650 of these Snell Pattern bayonets were produced they are quite rare and desirable today. When they are encountered they are inevitably missing the folding iron muzzle ring that mounted at the rear of the brass grip. However, this bayonet is 100% complete, original and all of the complicated mechanisms function perfectly. The folding muzzle ring is present and functions as it should, with the original spring loaded lock stud still functional. The ring has a wonderful dark brown patina that is untouched, and this same patinas is present on the balance of the iron parts. The spring-loaded muzzle locking mechanism within the brass muzzle ring works as it should and the rotating latch functions perfectly. The brass guard and grip has a lovely, untouched patina on the brass with a slightly greenish-brown tone. The full length, semi-Yataghan has a medium dull gray patina with some areas of darker age staining and some light brown patina. There are a few small patches of minor roughness and pitting present. The balance of the blade is mostly smooth with some small, scattered areas of peppering and pinpricking present as well. The bayonet retains its original scabbard, a US M-1855 Scabbard for use with the US M-1855 Rifleman’s Belt and Accouterments. Many of these early Mississippi Rifle bayonets were issued with M-1855 style scabbards. The scabbard is full length and in about good condition with reasonably strong leather that is just starting to weaken in a couple places. The scabbard exhibits some significant crazing and a moderate amount of finish loss. The rear seam stitching is in very good condition, with only one small area of thread loss, right at the brass drag. The original brass throat and drag are present and in good condition as well, both exhibiting a deep, dark, untouched patina. The drag shows a significant number of dents and some flattening, although this does not affect the fit of the bayonet. The drag also has a small crack on its bottom edge that has released it from the original copper rivet that held it in place. The throat is in nice condition and retains the original strap bar that the frog-retaining strap would pass through. The bayonet also retains a portion of the original belt frog. The portion that remains is in good condition with strong edge seam stitching. The two section of leather that extended from the frog to form the belt loops are long gone.Overall this is really an about FINE condition specimen of a very rare US saber bayonet. When these bayonets are available for sale it is not uncommon form them to be priced in the $1,400 to $1,500 range, without a scabbard, and usually without the iron muzzle ring! This example is 100% complete and original and in great condition for display. It includes a nice original scabbard and a good portion of the original frog, and all for a price much lower than many dealers are charging for an incomplete bayonet with no scabbard at all. All in all this is a great displaying Snell bayonet at a very attractive price.