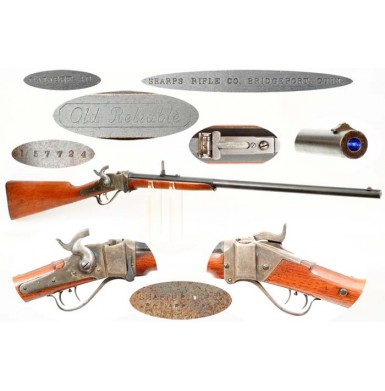 The Sharps M-1874 Sporting Rifle offered here is an extremely rare example that has an octagon to round barrel configuration. The large majority of the of M-1874s had full octagon barrels and only 387 rifles (about 6% of the total production) had this graceful, weight saving octagon to round barrels. The rifle is chambered for the Sharps .40 2 ““ Bottleneck Cartridge, better known as the .40-70 Necked (to differentiate it from the .40-70 Straight), and propelled a 330 grain round nosed, paper patched bullet at about 1,420 feet per second with a charge of 70 grains of black powder. The necked cartridge was designed for both long range shooting and accurate shooting. The half-round half-octagon barrel is 28” long and is marked on its bottom 4 15/16, indicating its weight as 4 pounds and 15 ounces. This reduced barrel mass allows the rifle to weigh in at a very comfortable 9 “ pounds, while a similar rifle with a full octagon barrel would weigh about 4 pounds more, around 13 pounds. The rifle is equipped with double set triggers, and a standard Lawrence Patent buckhorn style ladder rear sight. The lack of a tang sight suggests that this was intended to be a working hunting rifle at realistic ranges, rather than a target or long range hunting gun. The rifle is serial number 157724, and according to the Sharps factory ledgers was shipped on August 9, 1878. The serial number appears on the upper receiver tang and under the barrel (hidden by the forend). The last four digits of the serial number, 7724 appear on the inside of the lock and inside the forend. The left side of the receiver is marked in two lines: SHARPS RIFLE CO. / PAT. APR. 6, 1869. The top of the octagon portion of the barrel is marked just in front of the receiver, CAL 40. The top of the barrel is marked in front of the rear sight, SHARPS RIFLE CO. BRIDGEPORT. CONN, and the Sharps’ company trademark Old Reliable is stamped to the rear of the sight, in an octagonal cartouche with rounded edges. As noted, the rifle was produced in 1878, and a copy of the factory records letter accompanies the gun. The “factory letter” is from Dr. R.L. Moore Jr. of Philadelphia, MS, and is dated April 14, 1871. The particulars found in the Sharps factory records regrading this rifle are confirmed in the letter. At the time, Dr. Moore was the owner of the Sharps factory ledgers and would provide a research letter on a gun for the nominal fee of $5.00. The original type written letter was apparently lost at some point in time, but an old photocopy of the letter is included with the rifle. The letter notes that the rifle was priced at $42 dollars, and the factory weight of 9 “ pounds was listed. The M-1874 Sharps Sporting Rifle was shipped from the Bridgeport, CT factory on August 9, 1878 to J. Griffith & Sons, Louisville, KY. Joseph H. Griffith was a dealer in gun locks, derringers, general firearms and related material who established himself in 1843 and remained in business through 1878. The last four years, 1874-1878, the firm operated as Joseph Griffith & Sons. The letter confirms configuration of the gun, including the 28” “ octagon - “ round barrel, double set triggers, and the .40 caliber 2 ““ bottleneck chambering. The letter notes that the rifle was shipped with another gun of the same configuration, as well as with the necessary loading tools and loading components (bullets, cases, etc.) for the owner to manufacture ammunition for both rifles. At $9 more than the standard price of an M-1874 Sporting Rifle (an increase of about 27%), it is evident why not many of the more expensive octagon to round barrels were ordered. For the basis of comparison, using a combination of factors including both commodity value over time and the change in the value of wages from 1878 to 2015 (see measuringworth.com), the standard $33 Sharps rifle would cost $10,500 today and the $42 variant offered here would cost about $11,900. In both cases the greatest reason for the increase in their cost is due to the use of skilled labor in the production of the rifle, and not the percentage of increase in the Consumer Price Index.

This Sharps M-1874 Sporting Rifle is in about FINE to VERY FINE overall condition. All of the markings remain crisp and sharp and the rifle appears to be 100% complete, original and correct as it left the factory. The barrel retains the large majority of its original blued finish, probably about 60%+. The blue does show some wear, fading and thinning from handling and use but shows no damage or abuse. The octagon section of the barrel shows most of its loss at the sharp edges where the flats meet, and retains slightly more blue overall blue than the round section which was apparently handled more during the working life of the rifle. There are some flecks of minor surface oxidation and tiny freckles of age discoloration scattered along the barrel and mixed with the original blue, and the areas where the bluing has worn down to the base metal have an attractive and smooth plum brown patina. The barrel is almost entirely smooth, with only some lightly scattered pinpricking and lightly scattered hints of minor surface oxidation present. Both Lawrence Patent rear ladder sight and the dovetailed front sight appear to be completely correct and original to the rifle. The rear sight bears the usual Lawrence Patent information on its base, under the ladder. As is typical and correct for these rifles, the ladder is unmarked, as it was assumed the ladder would be graduated by the user after he had completed his load development, allowing him to customize his sight graduations to the load he used in the gun. The bore of the rifle is in VERY FINE condition and remains mostly bright. It retains very crisp 6-groove rifling with very narrow grooves and a relatively fast rate of twist. There is only some light pinpricking along its entire length along with some some light pitting scattered along it as well. The bore of the rifle should shoot very well with the right loads. The rifle’s receiver retains about 30% of its original vividly mottled case coloring, with the balance of the block having a pewter-gray to brown patina with some scattered flecks of brownish surface oxidation and some small areas of darker age discoloration. The receiver is mostly smooth, but does shows some evenly distributed pinpricking and some small areas of light pitting as well. The action of the rifle operates perfectly. The breechblock moves smoothly and locks securely into place. The extractor function correctly and appears to have more than enough power to easily remove even a tight case from a fouled chamber. The hammer and set trigger mechanism both function crisply correctly and are in excellent mechanical condition. The rear trigger “sets’ the front trigger when pulled, and the front trigger pull is extremely crisp and clean with no take up at all and a very light break that is certainly under 2 pounds. The receiver tang retains about the same amount of mottled vivid case colors as the receiver and matches the balance of the action perfectly. The checkered shotgun style buttplate has a dark bluish patina with brownish tones that matches the balance of the gun well. It shows some very lightly scattered pitting and surface oxidation. The screws all remain crisp and sharp with minimal slot wear. Most of the screws retains a significant amount of their original blue, although most of it has faded and dulled somewhat with age. The wood buttstock is in about FINE condition, with the usual assortment of bumps, dings, and minor bruises, as would be expected on a late 19th century big game rifle. The buttstock is solid and complete and free of any breaks, cracks or repairs. The Schnabel style forend of the rifle rates about VERY GOOD. The forend has a minor crack on the obverse that runs diagonally for about 2 ““ from the tip up to the barrel channel. There is an internal glue repair to stabilize this crack, but a more talented wood man could likely improve the stability and make the crack less obtrusive as well. The forend shows some handling marks and dings as well, and has a similar overall appearance to the buttstock. Neither the buttstock or the forend show any signs of having been sanded and retain a nice, unmolested appearance. The reverse of the buttstock has five tally marks lightly scratched into it where the wrist meets the frame. They are in the typical style with four upright and the fifth running through the other four as a diagonal line. There is no way to know what these five “kill” marks represent. The rifle is accompanied by a couple of nicely displaying accessories. An original box of 330 grain, .40 caliber bullets is included. The box retains 24 of the 25 bullets and has a nicely printed green label from the Union Metallic Cartridge Company, also of Bridgeport, CT. An empty box of 10 UMC .40 caliber Sharps 2 ““ cartridges is also included. Both items make nice accessories to add to the display of the gun. As previously noted, a copy of the research letter provided by Dr. Moore for the gun is also included.

Overall, this is an extremely attractive, and particularly scarce variant of the Sharps M-1874 Sporting Rifle. The gun is a really attractive rifle that was produced at the height of the western expansion and buffalo-hunting era. While Louisville is certainly not as alluring a shipping destination as Denver or some other western city would have been, it certainly makes sense. Cities like Louisville, St. Louis and Cincinnati were major jumping off points for eastern travelers heading west, and were often the last places that such people could make major purchases in. It seems more than likely that this rifle may have been initially shipped to Louisville and then proceeded further west in the hands of its new owner. The fact that only about 6% of the total production of M-1874 Sharps Rifles have the half-round half-octagon barrel, and that configuration is confirmed in the Sharps factory records make this and extremely rare variant that is very hard to find today. The rifle is rare enough and in nice enough condition to be a fabulous addition to an advanced collection of Sharps”, but also offers the potential to be a great gun on the range as well. This rifle offers a fine and crisp bore with a superior double set trigger mechanism, and would be one heck of a great rifle for long range shooting and hunting, or for a Cowboy Action Shooting side match. While it retains much original finish it is not so minty that you would be afraid to actually take it out and shoot it. As such it offers that rare combination of collectible condition and rarity coupled with some real shooting potential, that would allow this to be a wonderful addition to your gun collection and an addition to your working arsenal as well. I am very sure you will be quite proud to add this gun to your collection of fine rifles from the American West.