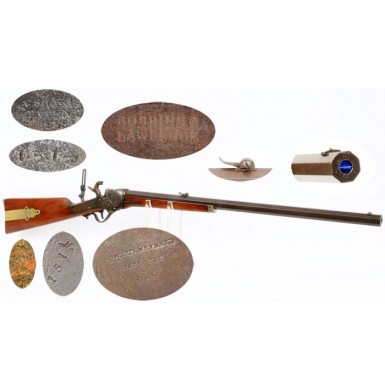 In November of 1852 the production of the “slant breech” series of Sharps rifles and carbines began. This series of guns would encompass four models, the Models 1851, 1852, 1853 and 1855. These were the first Sharps’ patent guns produced on anything approaching a “large scale”, as the earlier Sharps designs (M-1849 and M-1850) had been manufactured on a very small scale; less than 100 M-1849s and less than 200 M-1850s. It is somewhat disingenuous to say that Christian Sharps, inventor of Sharps breechloading design, holder of the patent rights thereto and namesake of the Sharps Rifle Manufacturing Company was the “designer” of the M-1851. The Model 1851, the first of the “slant breech” Sharps models, was certainly based upon Sharps’ patent and a model he had produced and submitted to his production partners at Robbins & Lawrence. However, it was the modifications to the design added by Richard S. Lawrence and William Jones that resulted in the very unique M-1851 design. The “slant breech” series derive that appellation from a change to Sharps’ initial design affected by Lawrence & Jones. Rather than the sliding breech block engaging the breech face of the barrel at a 90-degree angle, perpendicular to it, they inclined the breech 22 degrees to the rear, resulting in an operating angle of 112-degrees. This inclined plane is clearly evident from the exterior of the gun, as the breechblock is obviously canted to the rear. It would not be until the introduction of Sharps’ New Model 1859 series that the slanting breechblock would be discarded and Sharps would return to his original patent design of a perpendicular breechblock. The M-1851 series of gun utilized the Maynard Automatic Tape Priming mechanism that had been patented by Doctor William Maynard in 1848, and had a unique “box lock” mechanism, with the hammer inside the lock plate, rather than outside the lock. This allowed the bottom portion of the hammer to serve as the tumbler upon which the hammer operated, rather than having a separate tumbler inside the lock that was connected to the hammer outside the lock. This unique arrangement would be abandoned with the M-1852 Sharps designs and the box lock system would not be revisited by Sharps. The M-1851s were produced in both carbine and sporting rifle variations, with a total of about 2,050 produced based upon factory serial number records. Of these less than 200 were rifles (Seller’s cites 193, but notes that the lack of records for 38 serial numbers could cause his number to be incorrect) and the balance were carbines. Of the carbines 150 were delivered on a US Army contract and another 60 were delivered on a Navy contract. The guns were serial numbered sequentially from 1 to 2,050 and were produced from November 1 of 1852 through April 1 of 1855. The M-1851s were produced in three calibers, or rather bore sizes. Sharps rated the guns by bore size, or the number of lead balls that could be cast from a pound of lead for that size of bore. Under that system the larger the “bore” number, the smaller the caliber, and vice versa. The guns cataloged in in 32 bore (nominally about .52 caliber), 60 bore (about .43 caliber) and 90 bore (about .38 caliber). The sporting rifles were offered with either round or octagon barrels in lengths ranging from 18” to 34”, with 27” being the “standard” and most commonly encountered length. The carbines were produced with 21” round barrels. Most carbines were mounted with some variant of a sling bar for mounted carry. All M-1851s were brass mounted with brass patchboxes and buttplates standard and brass barrel bands on most carbines. Some M-1851s were produced without patchboxes, but not many. The rifles typically had pewter forend caps, but some were made without them as well. The standard sights were a fixed front and folding “squirrel ear” shaped rear mounted on the barrels of both rifles and carbines. On the carbine a fixed brass blade was the standard front sight and a fixed globe front sight was standard on the rifles. An additional folding long-range sight was typically mounted on the receiver tang of the rifles as well. Of course special order sights were available for the sporting arms, and both sporting rifles and carbines were available with factory embellishments like high grade wood, standard engraving, “extra” engraving, etc. Factory records only reveal 193 M-1851 Sporting Rifles being produced, and of these the large majority were plain (not engraved) octagon barrel guns. Sharps produced 66 round barreled Sporting Rifles, as well as 126 octagon barrel Sporting Rifles, and one lone oddity; a half-octagon half-round 60 bore Sporting Rifle. Of the M-1851 Sporting Rifles manufactured with octagon barrels, the production distribution was as follows: 10 were 32 bore (all plain), 66 were 60 bore (of which 53 were plain, 6 were engraved and 7 were “extra” engraved) and 47 were 90 bore (of which 41 were plain, 2 were engraved and 4 were “extra” engraved). Even though the M-1852 and M-1853 series of arms had been introduced during the latter part of M-1851s production life, the M-1851 was manufactured in limited quantities through the first quarter of 1855, at which time the production of the “box lock slant breech” came to an end.

Overall this is a very nice example of a rather scarce Sharps M-1851 Sporting Rifle, of which only 53 were produced in 60 bore with octagon barrels and without engraving. The metal has a lovely patina and coloration to it and the rifle displays very well. The description makes the wood repairs sound worse than they look, and you can see from the photos that the wood still displays well. For any serious Sharps collector a M-1851 is a must have item, as it is the first really attainable of the Sharps firearms (the M-1849s and M-1850s simply do not come up for sale very often at all). These are rare guns and historically important as well. When researching comparable sales, I found that the last couple of recorded M-1851 Sporting Rifle sales in comparable condition sold in the low five-figure price range. This gun is a little more reasonably priced and will certainly be an outstanding addition to your advanced collection of Sharps long arms.