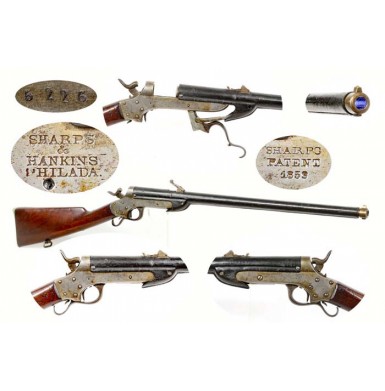 The US M1862 Navy Carbine as manufactured by the firm of Sharps & Hankins of Philadelphia was one of the more interesting and unique arms to see service with the US Navy. Between 1862 and 1865 about 8,000 of these breech-loading carbines were produced. The carbines were produced in .52 rimfire and had a unique sliding breech system for loading and unloading the gun. The gun also incorporated a number of “firsts’ in US military firearms design. The most important of which was that it incorporated a separate firing pin within the receiver, instead of it being mounted on the face of the hammer. This modification was adopted after the initial deliveries in 1862 of Sharps & Hankins naval rifles and carbines. The Sharps & Hankins was also the first US military used weapon to include a hammer safety mechanism that prevented the hammer from contacting the face of the firing pin. The final groundbreaking feature was the use of a spring-loaded extractor that automatically removed the spent cartridges from the breech when the carbine was opened. The gun was covered by no less than four separate US patents, three of which were unique to the patent application for the carbine. The carbine had a 24” barrel and was rifled with 6 grooves. One of the other odder features was the use of a leather shroud around the barrel, which was intended to help protect the barrel of the carbine from deterioration due to the salty and highly corrosive environment in which naval small arms saw use. The idea did not work particularly well, and actually appears to have encouraged, rather discouraged the degradation of the metal barrel. Today, these leather covers are often found in very rough condition (or entirely missing) from many of the surviving examples. Of the 8,000 “Naval” pattern carbines produced, the Navy purchased 6,686. The guns saw extensive use during the American Civil War, in many cases with the Brown Water Navy, which were the gunboats that worked to support the infantry on the river ways of the south, especially in the Western theater of operations. The carbines were issued to a large number of US Navy vessels, seeing service in the small-arms inventory of no less than forty-eight boats and ships. The carbines were also produced in a 19” barreled “cavalry” model without the leather barrel cover and with a sling ring. A longer barreled “rifle” variation was also produced, and all three models were serial numbered in the same series, without regard for the specific variation being produced. Interestingly, although the many authors and collectors refer to the gun as the M1862 Naval Carbine (including Flayderman’s Guide to Antique American Firearms), which references the year of adoption, small arms author and researcher John D. McAulay uses the designation M1859, referring to the year of design and patent issuance.

This Sharps & Hankins Naval Carbine in FINE condition. The gun is clearly and crisply marked on both sides of the frame. On the right side it is marked in three lines: SHARPS / PATENT / 1859. On the left side of the frame it is marked in four lines: SHARPS / & / HANKINS / PHILADA.. The tang is serial numbered 5226. The receiver retains traces of the original casehardened colors, which have faded and dulled to a medium pewter patina with some hints of mottled bluish colors, along with scattered areas of minor surface oxidation and light pinpricking. The loading lever has mostly “silvered out” and shows some small, scattered patches of age discoloration and minor pinpricking as well. The hammer retains traces of faded and muted case colors, as does the receiver tang. The lower tang has a deeply oxidized brown patina. There is a thin layer of darkened oil over much of the metal that has a brownish color to it. This could probably be carefully removed with some denatured alcohol or mineral spirits. The adjustable tangent rear sight (covered by US Patent #32,899 issued on July 23, 1861) retains some minor traces of its original blued finish, but otherwise has a patina matching the receiver. The brass butt plate has a mellow golden patina that is quite attractive. The rifle has a VERY GOOD bore with very crisp rifling present and shows evenly distributed light pitting along its length, along with some patches of more moderate pitting. The carbine retains the original elevating rear sight (as noted above), the front sight on the muzzle ring and the rear sling swivel on the toe of the stock. The action of the carbine works perfectly, both the sliding breech loading release system and the firing mechanism. The leather barrel shroud is almost completely intact and present, although it has shrunk slightly, pulling the front end of the leather away from the muzzle ring. The leather shows some even scattered flaking to the finish and also shows a number of scuffs and rubs. The stitching on the bottom of the leather barrel cover in excellent condition and remains tight and secure. The butt stock is in FINE condition as well, with no breaks, cracks or repairs. As would be expected, there are the usual assortment of minor bumps, dings, rubs and minor wear marks present on the butt stock, but nothing significant. There is a very small chip of wood missing along the comb, on the left side at the rear of the tang, but this is really minor.

Overall this is a really nice looking and 100% complete example of a relatively rare US Navy carbine. The gun is in tremendously better condition than they are usually encountered in, with a fine leather barrel shroud, crisp markings and a nice action. This is one of those less common carbines that is missing from many Civil War carbine and long arm collection and would be a nice addition to any Civil War naval display.