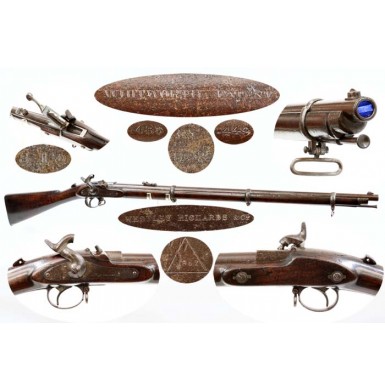 Offered here is one of the very scarce Westley Richards Monkey-Tail Breechloading Short Rifles. The gun is in about VERY GOOD condition, and is an extreme oddity in the world of Westley Richards Monkey Tail rifles due to its very unique 33” barrel length. From a practical standpoint, the rifle appears to be Military Match & Prize rifle, but those arms were only produced (to my knowledge) with 36” and 39” barrels. The only examples of Westley Richards percussion rifles with 33” barrels that I am aware of are the 8,000 Portuguese contract “Hunter” (Jaeger) rifles that Richards produced circa 1866-1867. Those rifles differ from this example in a number of features, including the pattern of rear sight, as well as the use of a single barrel band with a bayonet lug on the Portuguese variant. This rifle appears to be serial numbered in the Military Match & Prize rifle serial number range, particularly when its manufacturing date of 1862 is taken into account. A quick review of examples I have owned or observed shows that #323 was dated 1860 and #710 was dated 1861. This example is #813 and is dated 1862, conforming to the serial number and date sequence of known Westley Richards Military Match & Prize Rifles. I do know that a handful of his rifles were produced for British Naval Trials during this period, and it is entirely possible that his may be one of those trials rifles, although it is void of any type of British Board of Ordnance markings. For lack of a better description, I will refer to it as a Military Match & Prize Short Rifle until a better identification can be uncovered. The lock of the rifle is clearly marked in a single line, forward of the lock: WESTLEY RICHARDS & Co and with the date 1862 within a triangle to the rear of the lock. The top of the “monkey tail” is engraved WESTLEY RICHARDS / PATENT. The serial number 813 is stamped in two locations on the underside of the lever. The left side of the breech is marked with the aforementioned serial number, two Birmingham commercial View and Definitive Proof marks and a pair of 52 bore gauge marks, indicating the gun is nominally .451 caliber. The top of the breech is marked .449 and .493, indicating the exact measurements of the barrel diameter between the lands and the grooves. The top of the barrel is engraved, just behind the rear sight, WHITWORTH PATENT. The upper edge of the left side of the breech block is marked: 2 “ DRS CARTRIDGES, indicating that a charge of 2 “ Drams of black powder was the appropriate load for the rifle. One Dram Avoirdupois measurement of black powder is roughly equivalent to 27.34 grains, so a charge of 2 “ Drams is approximately 68.35 grains of black powder. If I working up a load for this rifle I would certainly start about 20%-25% below that level and slowly work up to the 68 grain vicinity.

The rifle is in a military-style musket configuration with a shorter, “rifle length” barrel of 33”, which is secured to the stock with three Palmer patent clamping barrel bands in the traditional locations. The gun is stocked to within 1” of the muzzle in the style of a Kerr or Whitworth military pattern rifle, both of which utilized three barrel bands and shorter than standard barrel lengths. The forend is tipped with an iron nose cap. The rifle has no provision to accept a bayonet of either the socket or saber variety. The rifle is slightly longer than 48” in overall length, and is entirely iron mounted. The rifle has the typical Westley Richards octagonal rifling, and as mentioned above has a .449” land to land diameter and a groove depth of .493”. The rear sight is a precision machined medium-based ladder sight, similar to that found on the P-1861 Enfield Artillery Carbine, which was itself a reduced length version of the rifle and rifle musket sight. The sight has the graduations engraved on the reverse (under) side of the ladder, and the base reversed from the usual Enfield configuration. The reversed base is often encountered on other precision English target rifles of the period, such as those produced by Whitworth and Kerr. The front sight is also precision machined, with a fine blade that is dovetailed into a raised oval base, with the blade being drift adjustable for windage. The rifle remains fairly crisp and sharp throughout, although it shows use, and unfortunately the evidence of some poor storage over time. The rifle retains none of its original finish, but has a deep, untouched plum-brown patina throughout. The barrel is mostly smooth forward of the rear sight, but shows light to moderate pitting evenly distributed around the breech block and forward towards the sight base. The balance of the barrels shows only some moderately scattered pinpricking, mixed with a few areas of light pitting along the barrel to stock juncture and a few areas of minor surface oxidation and light roughness. All three of the Palmer patent clamping barrel bands retain their original screw keepers at their ends. The upper band also retains its original military style sling swivel, while the lower swivel is mounted on the bow of the triggerguard in the fashion of a military musket. The buttplate has a grayish brown, lightly oxidized patina and shows evenly distributed moderate pitting, consistent with the buttplate having been somewhere damp for an extended period of time. The butt trap cover in the buttplate opens easily and reveals an empty compartment that originally contained a brass cleaning jag that screwed onto the cleaning rod, and a chamber cleaning tool. The original cleaning rod / ramrod is in place under the barrel in the stock channel. The rod is full length and retains good threads at the end. It has a small, recessed tulip shaped head and swelled shank with a sharp shoulder which secures it against a notch in the forend cap. The style is similar to a Type I P-1853 swelled rod with the first style head. What appears to be the original precision cone (nipple) is present in the cone seat. The gun is in mechanically EXCELLENT condition and functions perfectly in every way. The “monkey-tail” opens and closes smoothly and the breech-locking plunger (which is often damaged) moves freely. The hammer crisply locks into both half-cock and full cock positions, and the trigger release is crisp and clean, as one would expect from a military match rifle. The bore of the rifle rates about VERY FINE+ and is bright and sharp with crisp Richards style octagonal rifling. The bore shows only some lightly accumulated dirt and grit (which should clean easily) and some very lightly scattered pitting deep in the extended grooves. There is no doubt that with the correct ammunition, this rifle would still be a tack driver. The appropriateness of the ammunition is an interesting subject, as an example that I sold a few years ago was accompanied by its original wooden case for the rifle that retained its original label regarding that subject inside the lid. That label read:

The stock of the rifle is also in VERY GOOD condition. The stock is free of any breaks or repairs, and is full length and solid. There is a barely noticeable surface grain crack running in an angled path along the grain from the left rear of the wide part of the monkey tail lever to the rear most of lock mounting screws on the flat opposite the lock. This is the only real defect to the stock worth noting. Otherwise, the stock shows only the usual array of scattered bumps, dings, bruises and mars from handling and use that one would expect from a 19th century military pattern target rifle that appears to have seen serious use.

Overall this is a very solid and affordable example of a very scarce Westley Richards Monkey Tail Military Match & Prize Short Rifle. The gun is 100% complete, correct and original in every way and is a very attractive rifle. It would be a very nice addition to any advanced collection of English arms, especially one that focuses on percussion target and/or percussion breechloaders and Volunteer rifles. For the more adventurous black powder collectors and shooters out there, this a rifle that will probably win you a trophy or two, should you choose to shoot it in competition! The rifle is the perfect mix of well sued exterior with a fine bore that will make you less nervous about taking it to the firing line than you would be with a minty example. Of course the research and work to produce appropriate cartridges might be a little daunting and take quite a bit of time! With less than 50 of these fine arms known to have survived, this is rare opportunity to add a top notch English polygon-bore military target rifle to your collection, without having to pay the upper 4 to 5-figure plus price for a Whitworth!