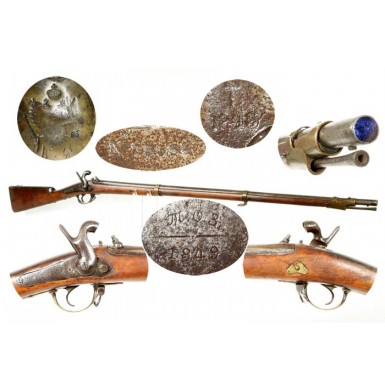 Of all European percussion military long arms from the mid-19th century, those from Russia are some of the rarest and least often encountered for sale in the United States. One reason that they are rarely seen on these shores is that they were probably not imported for American Civil War use, although at least one Congressional Document concerning the importation and purchase of weapons by the American Government during the Civil War does refer to a purchase of 2,000 Russian Muskets. This reference, however, has never been substantiated and is generally assumed to be an error, with the guns really being Prussian muskets. Even if this small number of muskets were imported, they are still extremely scarce on the American collector market today. They are equally scarce in Russia as well, since out of date muskets were perfect fodder for the scrap drives of both World War periods that turned any non-useful article into a useful weapon of war. In my many years of collecting and dealing in Continental arms from the mid-19th Century, I have only ever owned ta handful of Russian percussion military long arms: a Li’ge manufactured Russian L’ttich Carbine (a copy of the British "Brunswick" rifle), a Russian Model 1828/44 Musket (a percussion conversion from flint) and two Russian Model 1845 Muskets, the most recent of which is offered here.

The Russian M1845 Musket percussion ignition musket to be adopted by the Russian military for general issue. The Russians had adopted the percussion ignition system on paper in 1839, and by 1843 made it official, and ending the nearly two-centuries of reliance upon flintlock weapons. A limited number of percussion were issued on a trial basis between 1839 and 1843, but the Model 1845 was the first percussion musket to be produced in quantity by the Russians. The M1845 replaced the flintlock M1828 and M1839 muskets, which had essentially been brass-mounted copies of the French M1822 infantry musket. Much like other countries around the world, the Russians did convert many of the large stocks of older flintlock muskets to percussion as production of the new percussion musket was ramped up. The Model 1828/44 and M1839/44 were the percussion alteration designations for the older M1828 and M1839 flintlock models.

The new Russian M1845 Musket was based upon a French design, like its flintlock predecessor. The M1845 was for all practical purposes a brass mounted version of the French M1842 musket. The French M1842 was an iron-mounted, back action lock, percussion muzzleloading musket. It had a 42 “", 18mm (.708 caliber) round barrel, secured by three-barrel bands; the upper one being double-strapped. A lug to accept an angular socket bayonet was located under the barrel, about 1" from the muzzle. Sling swivels were mounted on the front bow of the triggerguard and on a stud under the middle barrel band. The stock was full-length and had a raised cheek rest on the reverse of the butt. The Russian M1845 Musket was nearly identical to the French model it was based on. The two primary differences were that the Russian musket was brass-mounted, and the cheek rest was raised, rather than recessed. Another difference was in the material used for the stock. The French muskets were stocked in European walnut, while the Russian muskets were stocked in Birch. The Russian muskets were also often painted black as a form of protection against the weather, something the French did not do.

The Russian M1845 Musket was the standard musket for the Russian infantry during the Crimean War. This period was one of great change for the Russian army. Up until that war, the musket in Russian service was really nothing more than a glorified pike, with the basic Russian infantry tactic being an overwhelming bayonet charge that would force the enemy from the field. In fact, the credo known as Suvorov's Apothegm was "The bullet is a fool - The bayonet is a hero!". As author Robert Thomas notes in The Russian Army in the Crimean War, 1854-1856, it was not uncommon for Russian soldiers who had spent 25 years in the army to have never fired their weapons! Rarely was powder or lead available for target practice or training, and Thomas notes that when the soldiers did train to fire their weapons it was often simply to get them to fire in unison (to provide an impressive volley), and more often than not clay balls were used instead of lead ones for the projectiles. Thomas additionally notes on page 17 that "Too often Russian muskets were poorly made and maintained”. Out of 1,318 Moscow Regiment muskets inspected 534 were unserviceable. Appearance was everything: musket barrels were polished until dangerously thin, while left rusty on the inside. Clay practice bullets further damaged the barrels”Thomas further noted that the Russians tried to improve the accuracy of their muskets by making copies of captured Allied bullets, which for the most part would have been hollow based, elongated balls for use with English rifled arms like the Pattern 1851 Mini” Rifle and Pattern 1853 Enfield. This did not work out well for the Russians and Thomas points out that "Accuracy and range were improved by the use of bullets made from models of captured Allied bullets, but in time the barrel clogged and burst.". It is quite interesting that the author brings this specific issue up, as the Russian M-1828/44 musket that I previously owned had a catastrophic barrel failure, with the barrel busting and creating wicked tear along its top, more than 5" long and roughly 5 “" from the breech.

The Russian M-1845 Musket here is one of the rarely encountered state arsenal manufactured muskets and remains in about VERY GOOD condition. The gun remains 100% period original and appears completely unmolested since the period of use. The Russians depended heavily upon the gun makers of Li’ge to satisfy much of their military small arms needs, with the balance being delivered from the Russian national arsenal at Tula. The Tula Arsenal was established in 1712 under Czar Peter 1st in Tula, Russia and remained an important producer of Russian small arms through the Cold War. This musket is clearly marked on the lock in Cyrillic script: TULA/ 1849. The matching 1849 date appears on the top of the barrel's breech, on the lobed, triangular lock screw escutcheon on the reverse of the stock, on the front and rear of the trigger guard and on the reverse of all three-barrel bands. All of the parts are marked with the Cyrillic initials of their production source, and all are numbered as well. The numbers for every part are different, suggesting that they are not assembly numbers, but rather worker marks or numbers. The left angled breech of the barrel is stamped with the serial number No 13564.The buttplate is rack numbered 17 on its tang, and is also stuck with the double-headed Imperial Russian Eagle that served as the royal crest of Czar Nicholas I.

The iron barrel has a slightly mottled, thickly oxidized brown patina over its entire length. The barrel shows even light pitting along its entire with more moderate, deeper pitting at the breech. The lock has a similar patina as the barrel, and shows scattered light pitting as well. The lock still functions crisply, although no "half cock" position appears to be present. The hammer locks crisply into the full cock position, and releases as it should when the trigger is pulled. The bore of the musket rates about GOOD+ condition. It is heavily oxidized and shows light to moderate pitting along its entire length; exactly as would be expected based upon the Crimean War excerpts quoted above. The musket retains both of the original iron sling swivels, but the upper swivel is broken on one side where it mates with the lug that attaches it to the barrel band. The original notched rear sight is present on the breech plug tang and the original brass blade front sight is still present as well, brazed to the barrel to the rear of the upper barrel band's front strap. The original ramrod is present as well. It is a double trumpet head shaped iron rod with a concave upper face and a small hole in the end, tapped in the Prussian style to accept the male thread from a wiper or ball puller. The rod appears to function like a Prussian rod, with the lower end being used to ram the charge, meaning the soldier did not have to rotate the rod to ram the musket or return it to the channel. The barrel bands, trigger guard and butt plate are all of brass and have a fantastic, completely untouched and uncleaned, thick ocher patina. The birch wood stock is in about VERY GOOD condition overall, and is complete, full-length and without any breaks or repairs. The stock has a deep, untouched patina and coloration that is partly the result of the black paint that was likely on the stock during the Crimean War use. The comb and upper part of the stock wrist have a darkened patina that suggest some light charring, possibly having been placed too close to a fire on a cold night in the Crimea. There is a small chip of wood missing behind the breech plug tang, the result of the barrel being improperly removed at some point in time, The musket also has a couple of minor, surface hairline draying cracks that follow the grain of the wood, very similar to those often encountered on Austrian arms made from equally hard and straight grained beech. Otherwise, the stock shows only the numerous bumps, dings, dents and mars that you would expect to find on a 169-year-old infantry musket that was carried by peasant conscripts during the Crimean War.

Overall this is really a very nice example of a scarce Crimean War era Russian musket. For those that collect Crimean War weaponry, this is a unique opportunity to own a very rarely offered Russian musket manufactured at the Tula Arsenal. For those who hold to the belief that Russian muskets were imported for Civil War use, this gun may be the missing link to confirm their presence; it would certainly be easy to accidently group this gun with a group of French infantry muskets and hardly notice it. One way or the other, this is clearly one of those muskets that you rarely get the opportunity to purchase and would be a fantastic representative piece to display with your Pattern 1853 Type I or Type II Enfield and your Pattern 1851 Mini” Rifle (not the easiest gun to find either”). Don't miss your chance to own an incredibly scarce Crimean War veteran Russian musket, which may well have seen service in the Civil War as well. For a dedicated Russian military arms collector, this musket would make a good starting point for a collection that moves from the percussion era to the Berdan I and Berdan II rifles, and eventually on to the classic Russian Mosin-Nagant Rifle, the SKS and AK47.