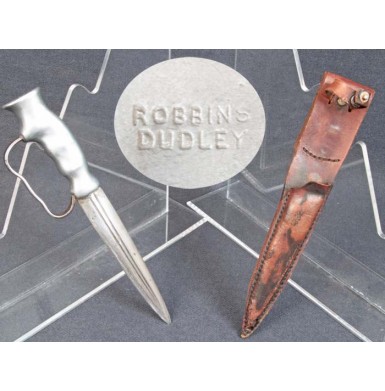 This is a very nice example of one of the patterns of fighting knives manufactured by the English firm Robbins of Dudley during the First World War. These rare fighting knives are typically referred to as Robbins “ Dudley knives by collectors, but in reality the company that produced them was Robbins & Company of Dudley, Worcestershire. The firm of Robbins and Company went into business in the mid-1870’s as “Brass Founders & Fender Makers”. The “fenders’ that they produced were the decorative grills that were used in front of fireplaces. As the company grew it added ironwork to its production capabilities and produced bathtubs and other cast and wrought iron products. Around 1906 they started to produce “art metalwork”, including a wide variety of decorative metal items, and by 1910, that was their only pursuit. With the coming of World War I, Robbins of Dudley turned their attention and metal working skills to producing a variety of fighting knives for sale to the troops. The firm produced no less than 10 patterns of knives, most of which incorporated a steel dagger blade cast into an aluminum hilt. They are probably best known for their most commonly encountered fighting knife, a “push dagger” with an aluminum hilt and steel knuckle bow. According to the records of the County Borough of Dudley, the firm went out of business during the early 1920’s.

This Robbins of Dudley fighting knife is one of the less often encountered variants (although no Robbins Dudley knives are common). It is a “3 Finger” Knuckle Knife. It is 8 7/8” in overall length, with a 5 1/8” dagger blade. The blade is 7/8” wide at the base and tapers rapidly to a sharp double-edged dagger point. A pair of crude, narrow fullers, about 4 ““ in length run from the base of the blade to the tip, converging about ““ before the tip. The blade is cast directly into the aluminum hilt, which is contoured to fit the hand and has 4 finger grooves cast into it as well. A 2 ““ long, 3/8” wide contoured steel knuckle guard is also cast into the hilt to protect the first 3 fingers of the hand holding the knife. The base of the aluminum hilt is cast wider than the balance of the hilt and is completely flat. It is clearly and deeply stamped in two lines: ROBBINS / DUDLEY. The knife is in about FINE overall condition. The blade is mostly bright with only some minor sharpening marks along the edge. There are some small areas of minor age discoloration, light surface oxidation and minor pinpricking present on the blade. None of this is significant or detrimental to display. The aluminum hilt has a lovely pewter gray color to it. A very old leather scabbard accompanies the knife, which has clearly been with it for many, many years. The scabbard is not the original World War I era scabbard, but may be a World War II era replacement. The scabbard retains all of its original stitching, which remains tight and secure; with the only wear being at the very tip. The heavy leather scabbard body is folded over at the top and sewn to create a belt loop that will accommodate a 2” belt. The hilt-retaining strap is in place and the snap closure functions well. There is a tiny tear (less than 1/8” long) in the strap with the female snap. This is stable, but excessive snapping and unsnapping of the strap could cause the tab to tear further. The original Robbins scabbards used a fold over leather strap and brass stud as a closure and method of retention, not a snap. The leather of the scabbard shows some staining from sweat, oil, dirt; all of which is from actual field use over the years.

Overall this is a really great example of a very scarce variant of a World War I fighting knife by the famous English company Robbins of Dudley. When the rare Robbins fighting knives are encountered they are usually the push dagger knuckle knife, or one of the larger knuckle knife variants. I could only find one other example of this pattern of knife for sale recently, and it was priced at $1,495! This is a high condition example that is well marked and is priced at half the price of that knife. This will be a great addition to any collection of First World War fighting knives, and especially a collection of English and Commonwealth fighting knives.