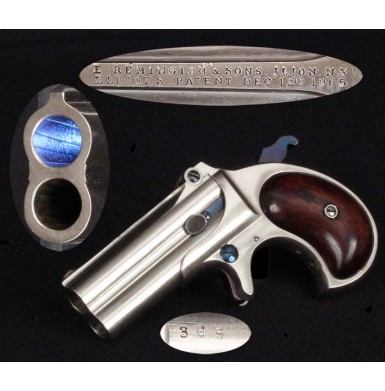 The Remington Model 95 Double Derringer (aka “Over & Under Derringer”) is probably one of the most recognized and famous firearms in the world. Even those with little interest in (or knowledge of) firearms will immediately identify one as a “Derringer” when it is shown to them. Other than the Colt Single Action Army revolver, and the Winchester 1873 rifle, there is probably no other firearm that has a stronger association with the American West. This is most likely the result of the ubiquitous use of the Model 95in Hollywood westerns, and as a result the guns will forever be associated with the gamblers, outlaws, women of ill-repute, scallywags and scoundrels that seem to inhabit every western town on the big and small screen. The Model 95 Double Derringer was designed by William Elliot of Remington, who had previously designed as whole series of popular and successful pocket pistols and derringers for the firm. The Model 95 was unique in that it provided the “big bore” punch of the .41 rimfire cartridge in a very compact package, and offered the user two shots without a reload. The small number of .41 RF derringers that preceded the Model 95 to the market were single shot pistols, so the Model 95 offered twice the firepower of its competition. The pistol was patented by Elliot and Remington in 1865, and went into production in 1866. The overwhelming success and popularity of the Model 95 is underscored by the fact that it remained in production from 1866 through 1935 (well past the golden age of the American West), and more than 150,000 of the diminutive pistols were produced during those 69 years! The simple elegance and utility of the design is further highlighted by the fact that derringers of the same basic design (although made by other companies than Remington) remain in production to this very day! The Model 95 was a simple and elegant design. Two 3” long, superposed barrels were mounted to a frame with a compact, semi-birds head grip shape. The barrels were connected to the frame by a top hinge at their rear and secured by a pivoting latch on the bottom of the frame. Swinging the latch 180-degrees down and forward freed the barrels to tip up at the hinge for loading and unloading. The first 2000 or so Model 95 pistols were produced without an extractor, but all subsequent production incorporated a manual sliding extractor on the left side of the frame to ease the removal of spent cartridge casings. The central component of Elliot’s patent was the pivoting firing pin, which automatically shifted between the upper and lower barrels every time the hammer was cocked. This was simpler and more robust design than the rotating firing pins that had been used in the Sharps, Starr and Remington-Elliot multi-barreled derringer designs that had preceded the Model 95. The pistol had a simple, single action mechanism and a spur trigger. The pistols were available with either a blued or nickel-plated finish and two-piece grip panels came standard in walnut, rosewood or hard rubber, with mother of pearl, ivory and other exotic materials available for an additional charge. Initially the guns were serial numbered sequentially, but this was abandoned fairly early during production for “batch numbering” in smaller quantities. Today, this system of numbering prevents the guns from being dated by their serial number. As a result, collectors have broken down Model 95 production into “Types”, based primarily upon the style and location of the barrel markings. The only significant manufacturing change to occur during production was the introduction of the manual extractor circa 1867, after less than 2,000 pistols were produced. The typical breakdown of types, per Flayderman’s Guide to Antique American Firearms and Their Values are as follows:

This marking and location place the production of this Remington Double Derringer between 1868 and 1888, at the height of westward expansion and during the golden age of the American West. The pistol is clearly and crisply marked throughout. The serial number, or “batch number” 369 is present under the barrel and on the upper left side of the frame, under the grips. The gun retains about 98%+ of its original factory nickel finish with only a couple of the most minor, nearly imperceptible areas of minute flaking noted. There is some very light frosting to the finish around the barrel hinge, and some very minor surface scuffs from handling and carry are scattered on the pistol. These in no way affect the display of this really exceptional derringer. The condition of the finish is truly outstanding. The small metal parts all retain the large majority of their fire-blued finish. The hammer retains about 90%+ vivid fire bluing with only some minor fading and high edge wear, the extractor retains about 80% of its fire blued finish with most of the dulling and loss on the checkered thumb piece and the breech locking latch retains about 85%-90% of its fire blue with some minor fading and loss at the contact points and some color change towards plum noted. Even the spur trigger, which was likely handled more than any of the blued parts, retains about 70%+ of its fire blue, with some minor fading, thinning and light wear noted. Even the screws retain most of their original finish with the large trigger screw retaining about 90%+ brilliant fire blue and the hinge screw retaining about 80%. The grip escutcheon screw retains about 50% of its finish and shows the most dulling and fading. All of the screws remain crisp with excellent heads with the exception of the hinge screw, which shows some minor slot wear from an ill fitting screwdriver. One of the biggest design problems with the Model 95 was the weakness of the barrel hinge, and as a result cracked and broken hinges are common on these pistols. The hinge on this gun is pristine and completely undamaged. The pistol functions perfectly, with the automatically pivoting firing pin alternating between the upper and lower barrels exactly as it should. The breech latch functions smoothly and locks the action securely and the extractor moves smoothly, functioning as it should as well. The bores of the pistol are in about FINE condition. They remain mostly bright and shiny with excellent rifling. The bores show some lightly scattered pitting along their length, with a couple of larger patches in each bore. The bottom barrel shows slightly more pitting than the upper one, but both are really in very nice condition. The two-piece rosewood grips are in NEAR EXCELLENT condition. They are solid and complete and free of any breaks, cracks or repairs. The right grip is slightly darker in coloration than the left, but this is not uncommon due to variances in wood color and grain. The grip panels retain about 80%+ of their original varnish and show only some minor handling marks and light surface scuffs.

Overall, this is a truly excellent, investment grade example of the most famous and recognizable of all the old west era “derringer” pocket pistols. No collection of American western arms, pocket pistols or derringers is complete without a Remington Model 95 “Double Derringer”. This gun is in a simply outstanding, even amazing state of preservation and is a piece that will be extremely difficult to ever upgrade from. It bears the very desirable Type I markings and was definitely produced between 1868 and 188, during the high water mark of western expansion. I’ll let the photos speak for themselves. This is an end of the road, outstanding Remington that you will be extremely happy to add to your collection. It is interesting to note that the current Blue Book of Gun Values (34th Edition) places a value of $5,000.00 on a 95% example of this pistol. This gun is better than 95%, and is priced about 35% under that value, allowing the prospective long term arms investor to make an appreciable return on the this investment grade Remington Model 95 Double Derringer.