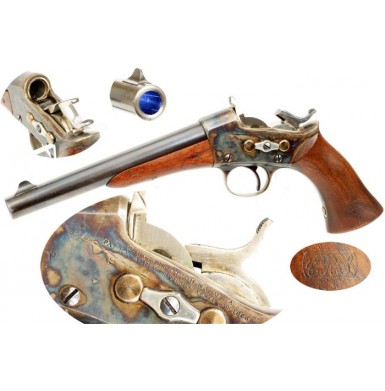 The Remington Rolling Block series of pistols used by the US military during the late 1860s and early 1870s are an excellent example of how a military bureaucracy can rarely react to rapid changes in technology and tactics in a way that creates positive outcomes for the soldiers who are under their direction. The end of the American Civil War had clearly indicated that the self-contained metallic cartridge, used in conjunction with some form of breechloading firearm, was the wave of the future for all of the military organizations around the world. What was not immediately obvious to the men of the general staff, many of whom had received their baptism under fire during the age of flintlock firearms, was that these weapons would also have to be repeating, and not single shot firearms. The prejudice of the Ordnance Department and the general staff against repeating firearms had been displayed during the Civil War with the strong resistance to adopting such revolutionary designs as the Spencer and the Henry rifle. While both were eventually acquired in some quantity (particularly the Spencer), the end of the war resulted in an immediate return to the doctrine of single shot long arms to reduce the potential for ammunition wastage. Amazingly, this same attitude regarding repeating handguns was pervasive within both the navy and the cavalry. The navy had long felt that the pistol was of limited utility and was only effective during the boarding of enemy ships. As the boarding of ships had essentially ended for the US Navy with age of armor clad vessels, the need for a handgun for general issue was greatly curtailed. Additionally, the current doctrine specified that the cutlass or axe was the preferred weapon for boarding parties, not the handgun. With the same theory held by the US Army, that repeating arms resulted in ammunition wastage, the navy proceeded to contract for a new pistol in 1865. The gun would utilize the new metallic cartridge ammunition, but would be a single shot pistol rather than a revolver. In one swift motion the navy took one step forward towards the 1870s with the adoption of modern ammunition and at least two steps back to the 1840s with the return to a single shot pistol. The gun adopted was the Model 1865 Remington Rolling Block pistol. The gun was chambered for a .50 RF cartridge that was essentially a reduced power version of the .50 RF Government cartridge that had be adopted by the army for use in carbines. The gun had an 8 ““ round barrel and a spur trigger, and was rather quickly found to be lacking. By 1867 a modified version, designated as the Model 1867, was adopted. Most of the existing Model 1865 pistols were subsequently modified to the new standard. This included shortening the barrel to 8”, altering the pistols to the new .50-25 CF government pistol cartridge and adding a triggerguard. The pistol, based upon the same action that Remington had used to produce a successful series of carbines and rifles, was a simple and robust handgun that offered a significantly larger caliber bullet than the revolvers then in use by the navy. The .50-25 cartridge was loaded with a 300 grain .50 bullet propelled by 25 grains of black powder to a rather slow 600 fps, but still capable of producing about 240 ft/lbs of muzzle energy. This represented about a 25% increase in muzzle energy over a similar .36 caliber percussion cartridge using a conical projectile and about the same muzzle energy as the .44 caliber percussion cartridges then in use.

While it is somewhat understandable that the navy felt the adoption of a metallic cartridge revolver was unnecessary, it is stunning that the US cavalry felt the same way. The general opinion was that the while the revolver had been a crucial weapon during the Civil War, that war was not a conventional “European” style war, and in the future, most wars would return to that pattern. Similarly, the Ordnance Department felt that for those regiments engaged in fighting Native Americans in the west, a revolver was a necessary weapon. However, for all other cavalry regiments it was believed that the saber was still the primary weapon of choice. In fact, the Small Arms & Accoutrements Board, which had met in St. Louis to evaluate new arms designs in 1870, had noted that "cavalry armed with the saber should have one or two single-barreled pistols as a substitute for the carbine”. The board did go on to recommend that "cavalry armed with the carbine should have a revolver as a substitute for the saber," but it was clear that this was only for “unconventional” warfare, like that being waged against the Indians in the west, and not for a traditional war as fought in Europe. This same thinking would shape European cavalry doctrine through the early days of World War I, when the British finally realized that Hiram Maxim’s machine gun had ended the days of the cavalry charge forever. It is interesting to note that most European nations still considered the saber the primary weapon for cavalry through 1915, and most did not adopt repeating handguns for general issue to all cavalry troops until the late 1870s or early 1880s, instead relegating the revolver in cavalry service to use by officers, NCOs and specialized troops. With this incredibly backward thinking as their primary motivation, on February 25, 1871, the US Ordnance Department agreed to acquire 5,000 Model 1871 “Army” Rolling Block Pistols from Remington, in exchange for 5,000 used Remington New Model Army percussion revolvers then in storage at various government facilities. The new M-1871 pistols were valued at $11 each, and Remington gladly took the New Model Army revolvers in trade, altered them to cartridge and sold them on the civilian market. The Model 1871 Rolling Block Pistol was an improved version of the 1867 Navy model. While it retained the same 8” round barrel and .50-25 CF cartridge, there were numerous improvements to the previous design. The grip was redesigned with ergonomic improvements and the addition of a spur or hump at the upper rear of the frame to help control recoil. There were also mechanical improvements to the lock work, the extractor, and the addition of a retracting firing pin. A new front sight blade was included in the redesign as well. The resulting pistol is certainly one of the most elegant and attractive handguns to see US military service, as well as one of the least practical. Like the prior US Navy variants, the pistol had a blued barrel and a color case hardened frame. The hammer and breech lever were left in the white and many small parts were strawed. A one-piece walnut grip and a walnut forend completed the pistol. Of the 5,000 pistols delivered by Remington to the US military, 1,377 were issued for field testing. However, as the US military adopted the Model 1873 Single Action Army slightly more than a year after contracting for the Rolling Block pistols, the reports from the field certainly found fault in the single shot design and commanders sought to replace the Remington with the Colt revolver. The M-1871 was soon withdrawn from service, despite the generally held belief in the upper echelons of command, that the single shot pistol was still the best firearm for cavalry, who were really supposed to rely on the saber as their primary weapon.

The US Model 1871 Army Rolling Block Pistol offered here is in about EXCELLENT condition and remains in the original .50-25 CF chambering. The left side of the receiver is clearly marked in two lines: REMINGTON’s ILION, N.Y. U.S.A. / PAT. MAY 3d NOV. 15th, 1864 APRIL 17th , 1866. The left side of the receiver is also marked with the US military sub-inspectors’ initials P and S. The frame, receiver and trigger guard retain about 95%+ of their vivid case colored finish and are really very striking in appearance. Even the back strap retains a similar amount of vivid case coloring. The barrel retains about 92%+ of its original blued finish, showing some minor dulling and fading from age. There is some very light wear along the contact points and high edges, and a couple of areas of minor loss due to some small dings on the bottom of the barrel, just forward of the forend tip. The hammer and pivoting block retain the large majority of their original arsenal bright polish, with traces of strawed finish on their sides. Both of the cross bolts in the frame retain the majority of their original strawed finish as well. The trigger retains nearly all of its brilliant fire blued finish and has a gorgeous, brilliant purple appearance. The metal is all smooth with no pitting of any sort present, nor even any pinpricking to speak of. Some extremely tiny and barely visible flecks of minor surface oxidation can be detected under strong light, scattered along the barrel, mixed with the original blued finish. The bore of the pistol is in EXCELLENT condition as well and is mirror bright, and retains excellent rifling. There is only some very light pinpricking and some minor frosting present along the length of the bore. The action of the pistol works perfectly and remains extremely crisp and tight with excellent mechanics. The one-piece walnut grip remains in about VERY FINE to NEAR EXCELLENT condition. It retains an excellent and clear script inspectors’ cartouche that reads CRS, for armory sub-inspector Curtis R Stickney. The forend remains in about VERY FINE condition as well. Both parts are free of any breaks, cracks or repairs and remain solid and complete. They do show some light wear and a small number of minor bumps, dings, and handling marks as would be expected, with the forend showing slightly more wear than the grip itself.

Overall this is a really outstanding and extremely high condition example of a relatively scarce US Martial Pistol from the beginning of the cartridge age and then of the single-shot pistol era. This would be both a wonderful addition to your Indian War era martial arms collection and a great potential single-shot target pistol or game getter. The photos below really do not do justice to the condition and appearance of this pistol. This would be a wonderful addition to any advanced collection of US martial pistols and would certainly be almost impossible to upgrade.