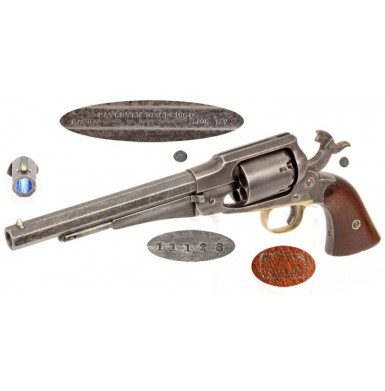 This is a very nice example of the scare Remington “Old Model” (aka M-1861) Army percussion revolver. The M-1861 was intended to be an improvement on the older Beals Model Army revolvers that Remington had produced from 1858 to 1862. Only 850 of the .44 “Army” caliber Beals revolvers were purchased by the Ordnance Department and they are very rare guns today. The M-1861 or “Old Army” percussion revolver included the improvements covered under William Elliott’s patent #33,932 of December 17, 1861. This patent allowed the cylinder arbor pin to be removed from the frame, freeing the cylinder, without lowering the loading lever. Other improvements included a redesigned frame that left the barrel threads exposed at the rear of the frame. This reduced the amount of metal used in the frame, saving cost and weight. Remington received a contract on July 13, 1862 for 20,000 of their new M-1861 .44 Army revolvers. During the next 6 months, Remington delivered a total of 4,902 of their M-1861 .44 caliber revolvers to the Ordnance Department. In use, the “improvements’ covered under Elliott’s patent were not really improvements. The grooved loading lever that allowed the removal of the arbor pin without lowering it also allowed the pin to move forward under the inertia of recoil. When this happened, the revolver became inexorably locked up and non-functional. As a result, most of the M-1861 revolvers were returned to the Remington factory where the channel was blocked to prevent the movement of the pin, or the loading lever was replaced with the old pattern, solid Beals type lever. Other complaints revolved around the lack of safety notches on the cylinder. As a result, the M-1861 “Old Army” was redesigned as the “New Model Army” (aka M-1863) and all deliveries under US Ordnance contracts from January 1863 onward were of the new version of the revolver. Even the 15,098 outstanding revolvers from the June of 1862 contract, that were delivered in 1863, were “New Model” instead of “Old Model” Army revolver. The development of the “New Model” occurred concurrently with the production of “Old Model” revolvers. As production continued into the later part of 1862, M-1861 Old Model revolvers began to emerge from Ilion with safety notches on the rear of the cylinder and loading levers that blocked the cylinder arbor pin. All of the Remington “army” caliber revolvers were serial numbered in the same range, starting with the Beals series, and through the M-1861 and M-1863 variants. As production of the models was sometimes concurrent (Beals & M-1861s simultaneously, and M-1861s and M-1863 simultaneously as well) it is difficult to separate the models by serial number except within ranges. Beals models were produced in the 1-3000 range, M-1861s in the 3,000-22,000 range and M-1863s in the 15,000 to the end of production (about 135,000). The range of 10,000 to 22,000 is often called the “transitional range” where some of the “Old Model” revolvers appear with some of the “New Model” features. During the course of the American Civil War, Remington would deliver some 115,557 .44 revolvers to the US Ordnance Department. However, only 850 would be the oldest Beals pattern guns (0.7%) and 4,902 would be the M-1861 “Old Model” Army (4%). The balance would all be the M-1861 “New Model” revolvers. Eventually more than 70 US cavalry regiments would be armed with .44 caliber Remington revolvers, including the 4th & 6th US Regular Cavalry, the 4th US Colored Cavalry and volunteer US cavalry regiments from some 20 different states and territories!

This is a VERY GOOD+ to NEAR FINE condition example of a Remington M-1861 “Old Model” Transitional Revolver. The gun is 100% complete, correct and original in every way. The pistol retains about 20% of its original blued finish overall, with the majority located on the 8” octagonal barrel, and amount varying from traces to about 10% on the frame. The finish on the barrel appears in mottled patches, mixed with a blue-gray patina. The cylinder retains only traces of its original blue. The balance of the gun has faded to a muted, smoky gray patina with a bluish tinge. The hammer also retains traces of mottled case coloring, mixed with the same smoky, blue-gray patina. The barrel is well marked in two lines with the usual “Old Model” markings: PATENTED DEC. 17 1861 / MANUFACTURED BY REMINGTONS’ ILION, N.Y. The revolver is serial number 11128. This number is present under the barrel, on the frame under the left grip and in pencil under the grips. The rear face of the cylinder is numbered B 1 28, matching the last three numbers of the serial number. This serial number places it well within the range of “Old Model” guns, and at the beginning of the range of “transitional” revolvers. The transitional features include safety notches at the rear of the cylinder and a solid loading lever that prevents the arbor pin from moving unless the lever is lowered. The pistol bears numerous small sub-inspector marks throughout, most of which are a single italicized capital P found in conjunction with a single capital A. Additional sub-inspector marks include J, C and S. The left grip bears a partially legible script inspection cartouche, which I cannot decipher. The metal of the pistol is mostly smooth, with some scattered oxidized pinpricking and a few patches of light pitting, most of which are scattered along the barrel. This suggests the pistol may have been stored in a holster for many years. The gun is mechanically excellent and indexes, times and locks up exactly as it should. The bore of the revolver is in about VERY GOOD condition. It retains strong rifling throughout and is mostly bright, but does show scattered light pitting along its entire length, with some small areas of more moderate pitting noted. The pistol retains its original German silver cone front sight. The original loading lever is in place under the barrel and it functions smoothly as it should. The two-piece walnut grips are in about FINE condition. They are crisp and sharp and free of any breaks, cracks or repairs. A small chip is missing from the bottom center of the left grip panel, the result of a surface chip on the interior of the grips that runs from the screw escutcheon hole to the bottom of the grip. This is probably due to a flaw in the wood, and not due to abuse, as the rest of the bottoms of the grips remain quite crisp. In fact, even the small sub-inspection marks on the grip bottoms remain visible. As noted, the left grip retains a partially legible inspection cartouche. The grips show a few minor bumps and dings from use and handling, but no abuse. An old, thin layer of protective varnish is present on the grips, and this has probably helped to preserve them over the years.

Overall this is a very crisp, complete and original example of a very scarce, early Remington marital revolver. With only 4,902 M-1861 “Old Model” Army revolvers being delivered, they represent only 4% of total Civil War deliveries of Remington Army revolvers. These guns are hard to find for sale, and when they are encountered they are usually heavily worn and in rough shape. This is a very nice example with lots of eye appeal and has no issues or problems to explain, or make excuses for. These early Remington’s are often missing for even advanced Civil War pistol collections, and this would be a nice example to add to your collection or display.