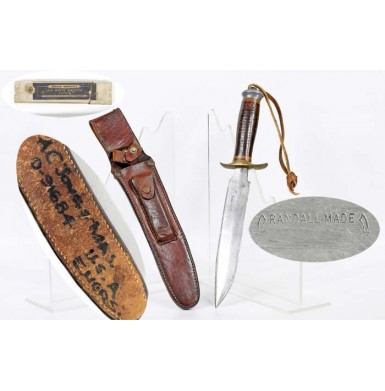 The name Randall is one of the most iconic names in American knives. In the world of modern combat and fighting knives, the name is probably as revered as the name "Bowie" is among 19th century knives. Walter Doane Randall Jr. (better known simply as "Bo") first became interested in making handmade knives in 1936 after encountering a man using a handmade William Scagel knife. The quality of Scagel's work impressed Bo to the point that he set out to try and emulate the quality and to make knives of his own design. By 1938 his hobby of knife making had become a small business and on September 13, 1939 Randall trademarked his classic two-line Randall logo: RANDALL MADE / ORLANDO, FLA., flanked by a pair of scimitars. The following year, Randall Knives published their first catalog. The timing could not be more auspicious.

Offered here is a VERY GOOD condition, World War II production Randall Model 1 "All Purpose Fighter", the knife that really put Bo Randall's knives on the map. The first Model 1 was manufactured on a custom basis for Lt. J.H. Zacharias of the US Army. Lt. Zacharias apparently approached Randall about a custom fighting knife that Randall felt would have been too large and unwieldy in practice. The Model 1 was Randall's "practical" execution of Zacharias' request. According to several sources, the entry line for the June 1942 order in Randall's book reads: "1 Special made, Swedish steel Jap Sticker for Lt. J.H. Zacharias." As the well-worn phrase goes, "the rest is history". The knife is marked on the reverse ricasso: RANDALL MADE / SPFLD, MASS, flanked by Randall's trademark scimitars. This marking makes this knife what collectors have long referred to as a "Springfield Randall". The story of this association is still shrouded in some controversy and contradictory information, but the basic story is as follows.

The popularity of Randall's knives meant that as World War II proceeded, the requests for the knives started to outstrip Randall's production capacity. In mid-1943 W.F. Larsen approached Bo Randall about having the knives produced on a licensed basis by a cutlery company in Massachusetts. Larsen proposed to have the knife manufactured to Randall's specifications, but on a mass production basis. In return for the right to manufacture the knives, Larsen would pay Randall a $0.50 per knife royalty. Larsen apparently arranged production with the Northampton Cutlery Company of Northampton, MA; a cutlery manufacturing company located about twenty miles from Larsen's home in Springfield. After getting the facility up and running, it appears that Larsen had managed to have some 263 knives produced by October of 1943, as he sent Randall a royalty check for those knives in that month. Reports indicate that the number of Northampton knives produced by January of 1944. At this point the story become less consistent with various versions floating around. The general consensus is that as of August 1945, Randall received royalty payments for a total of 1,179 "Springfield" knives. Thus, it is generally believed that about 1,200 of the knives were manufactured in total. Some stories indicate that at some point in 1944 Larsen began assembling the knives at home in his basement, presumably from parts produced by Northampton. Collectors generally agree that 1) the "Springfield" Randall knives are nothing if not inconsistent in small features, and 2) there is a marked quality difference between the early production knives, thought to be the complete work of Northampton Cutlery and the later knives that were apparently finished by Larsen himself. Even Larsen's son recalls seeing his father placing leather washers on the hilts of knives that he was finishing in the family basement. Collectors have noted a definitive difference in the quality of the final blade finish, polish and grinding between Springfield marked knives, and attribute these lower quality knives to Larsen's work. In the end, while there is certainly some level of difference between the various Springfield marked Model 1 Randall Knives, all were apparently made during World War II, and most saw significant use during that war and conflicts that enveloped the United States over the next three decades.

The Model 1 was the original military style fighting knives that Bo Randall built his business on during the 1940s and 1950s. The knife featured a semi-clip pointed single edged blade that was nominally 8" in length, with a thick Randall curved brass cross guard and a leather washer grip with a moderate palm swell. The knives were very strong and durable, and were equally at home doing traditional cap duties as well as being used in combat, something that could not be said of many of the specialized US fighting knives of World War II, like the USMC Raider Stiletto of the Case V42.

As noted, this knife remains in about VERY GOOD condition and is complete with the original World War II period scabbard and sharpening stone. The scabbards are a source of disagreement between Randall collectors as well, with some believing that a tertiary supplier to Randall, Southern Saddlery of Chattanooga, TN provided the scabbards and others believing that C.J. Moore supplied them. Both were Randall suppliers, but Randall himself preferred the quality of H.H. Heiser and tried to use them whenever possible during that era. The knife has an 8 1/8" clip point blade with a 2 “" false edge. The blade is 1 “" wide at its widest and narrows to 13/16" wide at the ricasso. The blade has a 13/16" long choil that is about “" deep. The blade partially bright with some dulling and age patina due to age. It retains some of its original polish but shows some light sharpening and the usual minor scuffs and abrasions from actual use. The two-line RANDALL MADE / SPFLD, MASS mark remains mostly legible, but the lower line is quite worn and thin due to polishing and cleaning. The blade shows some scattered pinpricking and scattered surface oxidation and discoloration as well. While am far from a Randall expert, I would argue that the quality of the blade grind is not up to the usual Randall standards and this is probably a later production, "Larsen assembled" Springfield Randall using Northampton produced parts. However, I do not think it is a Northampton finished knife. The 2 15/16" long curved, semi-oval cross guard is between 1/8" and 3/16" thick, tapering at the end and is quite functional, but also very aesthetic matching the curves of the blade's waist and grip's gentle palm swell well. The guard adds some nice heft and balance to the knife. The guard has a nice, untouched bronze patina. The grip is 5" in length. Including the hex nut pommel cap and is comprised of sandwiched leather washers with contrasting washers at the hilt and pommel cap. The forward set of washers, behind the guard include a set of four with a set of red Bakelite washers at the beginning and the end and with a brass and wood washer as well. Only three are present at the pommel cap, with a single red Bakelite, single brass and single wood washer sandwiched between the leather grip and the “" long, cast aluminum pommel cap. The knife is contained in its original period leather scabbard, either by Southern Saddlery or C.J. Moore. The scabbard is not marked with any factory or maker information, but the man who carried the knife during the war marked the back of the scabbard in three lines:

The heavy leather scabbard is reinforced with nominally .40" diameter copper rivets at the throat and sewn everywhere else. The scabbard has a retaining strap with a brown enameled steel button closure that is unmarked. The closure button for the sharpening stone compartment on the face of the scabbard has the same pattern button. The stud on the pocket is long gone, and the pocket is partially ripped in this location. The pocket contains a white sharpening stone that has been broken, but remains held together by the paper label that identifies is as a NORTON INDUSTRIES / LILY WHITE WASHITA / OILSTONE. The scabbard shows relatively heavy use and wear and the leather has darkened substantially due to oil, grease, dirt and sweat. All of the stitching remains original and tight and the scabbard is still very serviceable today.

Overall this is a really solid example of a desirable, late World War II production Springfield Randall Model 1 All Purpose Fighter. With only about 1,200 of these knives being produced, they are quite rare today and a coveted addition to any collection of US military fighting knives. While not of the quality of a handmade Randall, these knives are an important and historic part of the Randall Made story and make a great addition to any World War II edged weapons collection. It might be possible to research A.C. Jones of the US Army Engineers and find out about the military service of the man who carried this knife.