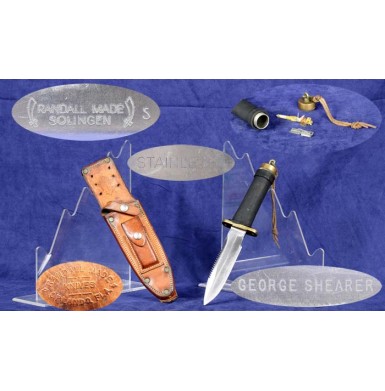 The name Randall is one of the most iconic names in American knives. In the world of modern combat and fighting knives, the name is probably as revered as the name "Bowie" is among 19th century knives. Walter Doane Randall Jr. (better known simply as "Bo") first became interested in making handmade knives in 1936 after encountering a man using a handmade William Scagel knife. The quality of Scagel's work impressed Bo to the point that he set out to try and emulate the quality and to make knives of his own design. By 1938 his hobby knife making had become a small business and on September 13, 1939 Randall trademarked his classic two-line Randall logo: RANDALL MADE / ORLANDO, FLA., flanked by a pair of scimitars. The following year, Randall Knives published their first catalog. The timing could not be more auspicious.

Offered here is a FINE condition, Vietnam Era Randall Model 18 Attack Survival Knife. The knife is one of the scarce and desirable Solingen marked examples and is clearly marked in two lines on the reverse near the spine: RANDALL MADE / SOLINGEN, flanked by Randall's trademark scimitars. The legend is followed by the capital letter S, indicating the blade is made of stainless steel. The word STAINLESS is also present on the reverse ricasso. Like many Randall knives of the Vietnam period, this one is a "name knife" and the owners name, GEORGE SHEARER is found on the obverse blade, above the median line.

The Model 18 was one of the first examples of what are now generally referred to as "Survival Knives" to be introduced into the knife market. It incorporated a conventional fixed blade with an aggressive saw back spine and a hollow handle to store survival supplies in. The original Randall Model 18s had a rubber crutch tip to cover the end of the hollow grip, but these were not exactly the most durable closures and the tip was often lost or damaged. It was not uncommon for the pommel cap to be modified "in theater" (often at an airbase) with a threaded cap. This one has a wonderfully well machined and knurled brass cap, complete with a rubber washer to insure the storage compartment remains water tight. Current production Randall Model 18s use a threaded, knurled brass pommel cap as well. The Model 18 was made with a blade of either carbon or stainless steel, and during the Vietnam Era some were made with the Solingen marked blades. The thick crossguard was of brass, as was the knurled grip cap, with the handle made of a hollow piece of steel. The Model 18 Survival Knife proved so popular when introduced in the mid-1960s that it remains in the Randall catalog to this day.

As noted, this knife remains in about FINE condition and is complete with the original Randall scabbard and sharpening stone. The knife has a 5 “" drop point blade with a 2 “" long series of aggressively serrated teeth along the spine. A 1" long, 1/8" deep choil is present below the ricasso, with the blade measuring 1 1/8" wide there and 1 “" wide at its widest point. The blade is mostly bright and retains much of its original polish but shows some light sharpening and the usual minor scuffs and abrasions from actual use. The 2 5/8" long oval cross guard is 3/16" thick and is pieced with holes at each end to allow the knife to be fastened to something. The brass grip cap has a lanyard ring and has an old leather thong attached. Both brass components have a nice, dark, uncleaned patina. When the grip cap is removed, the storage area in the hilt reveals an emergency fishing kit and a P38 folding can opener. The hollow steel hilt is covered by a textured piece of neoprene rubber that might be factory original but is certainly original to the period of use. The rubber coating is starting to dry out from age, losing its elasticity and is becoming somewhat fragile. The knife is contained in its original Randall factory leather scabbard. The top part is marked with the usual Randall style: RANDAL MADE / ORLANDO, FLA in an arced, two-line cartouche around the word KNIVES. The heavy leather scabbard is reinforced with “" copper rivets at the major stress points and has a retaining strap with a simple steel button closure. A small compartment on the face of the scabbard contains an unmarked gray sharpening stone. The scabbard shows use and wear and the leather has darkened due to oil, grease, dirt and sweat. All of the stitching remains original and tight and the scabbard is still very serviceable today. Areas of dark green verdigris are present on the scabbard, particularly around the rivets and on the sharpening stone.

Overall this is a very nice example of a scarce and desirable Solingen marked Randall Model 18 Attack Survival Knife with a stainless-steel blade, which is also named to its original owner. These Vietnam Era Randall knives are very collectible and desirable, and with a little research more about the owner George Shearer might be discovered. This would be a fine addition to your collection of Randall Knives and Vietnam Era militaria.