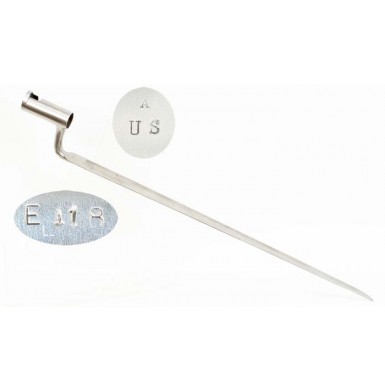 This is a scarce and very desirable socket bayonet for use with the PS Justice contract .69 rifled muskets that the Philadelphia based firm produced during the first year of the American Civil War. The firm of P.S. Justice of Philadelphia had its genesis as Justice & Steinmann, a sporting goods and hardware retailer. In 1842 Justice & Steinmann became customers of the Henry family company known as Bolton Gun Works (later J. Henry & Sons) and began retailing Henry produced rifles and shotguns in two Philadelphia retail locations. It is likely that the Justice company also offered arms by other makers as well, and it appears that prior to the American Civil War, Justice was not in the business of manufacturing guns. The Justice firm was one of J. Henry & Sons largest clients and purchased not only completed arms, but component parts as well. The majority of these parts were likely sold to other gun makers, but Justice may have assembled some arms from these parts in the last couple of years immediately preceding the opening of hostilities between the North and the South. It is interesting to note that the Justice firm was listed as a manufacturer of “railroad car springs’ in the 1860 Philadelphia Directory, and while census data from 1860 suggests that they manufactured 2,500 guns between June 1, 1859 and June 1, 1860, author & researcher George Moller notes that the company was not considered a manufacturer by US Secretary of the Interior, but only as an assembler. In 1861 the firm officially changed their name to P.S. Justice, dropping the name of Steinmann who had died in 1845. Justice was definitely a shrewd businessman, who saw an opportunity to make money and managed to secure a number of US arms contracts in the early days of the Civil War. Within days of war being declared, Justice contacted his largest supplier, J. Henry & Sons, in an attempt to purchase as many arms as possible for resale to the US government and various state and local militias. He also undertook a campaign of letter writing to state and federal officials, offering to manufacture various patterns of long arms for use by the troops that were volunteering to put down the “rebellion”. In these letters he mad some outrageous claims as to his manufacturing capability, suggesting that he could produce “1,000 stands per week and increase it to double if it is possible before the autumn closes”, as well as claiming to be making “extensive arrangements to manufacture the “Enfield” pattern Rifle both short and long pattern”. Justice further claimed that that he was “now engaged in making [a] superior Army Rifle, with either the ordinary [socket] or the sabre bayonet”. Justice never did “arrange to manufacture” Enfield pattern arms, but did manage to import some 3,000 long and 1,000 short Enfields which he subsequently sold to the US government. He also approached the Frankford Arsenal, offering in August of 1861 to deliver some 4,000 .69 rifled muskets “similar in style to the sample deposited with you at $20.00 each.” The US Ordnance Department agreed that the acquisition of such arms would be in their best interests, and they agreed to contract with Justice for the production of 4,000 .69 rifled muskets at the proposed price of $20.00 each. These were the guns that would eventually become known to modern collectors as the “PS Justice Muskets”. Flayderman's Guide to Antique American Arms designates these as "Type I", “Type II” and “Type III” variants, but George Moller re-designates them simply as “Type I” and “Type II” in his recently published American Military Shoulder Arms Volume - III. The “Type I” arms were manufactured with iron furniture and were generally made from obsolete, condemned and otherwise used parts, with some new components (especially stocks) sprinkled in among the guns. The “Type II” guns were brass mounted and can be further classified by at least four types of barrel configurations and three types of lock configurations. While many of these guns did utilize at least some surplus or used parts, the Type II guns were often mostly of newly made parts with re-used barrels being the most commonly encountered repurposed portion of the musket. A total of 2,174 .69 caliber rifled muskets were delivered to the US government by Justice, with the majority appearing to be the “Type II” brass mounted variant, and the balance being iron mounted. The arms were delivered between September 14, 1861 and February 25, 1862. Moller notes that between 1,000 and 1,800 of the brass mounted, Type II Justice muskets was produced and procured under this Federal contract. As noted, the guns varied in the parts used to construct them, and even their finish varied from variant to variant, with some having browned barrels and others bright, and some locks being bright and others blued. One common feature of all the guns was that the wood used for the stock was often poorly seasoned. Whether Justice was a patriot trying to assist his country with essential arms and materiel or simply an opportunist is still open to debate. What is obvious is that Justice took a cue from Eli Whitney Jr.’s company and minimized costs as much as possible in order to maximize profit. This meant that Justice’s firearms ended up with a reputation for being of poor quality and unsafe. There was at least some basis in fact for this reputation, as Justice was brought before the 37th Congress and the Holt-Owens Commission to answer for his “war profiteering” and for providing shoddy and substandard guns. One officer, 2nd Lt, William H. Harris who testified about the quality of the Justice rifled muskets issued to the 55th PA infantry noted that:

“This regiment is armed with rifle muskets, marked on the barrel, “P. S. Justice, Philadelphia”, and vary in caliber from .65 to .70. I find many of them unserviceable and irreparable, from the fact that the principal parts are defective. Many of them are made up of parts of muskets to which the stamp of condemnation has been affixed by an inspecting officer. None of the stocks have ever been approved by an officer, nor do they bear the initials of any inspector. They are made up of soft, unseasoned wood, and are defective in construction. . . . The sights are merely soldered on to the barrel, and come off with the gentlest handling. Imitative screw- heads are cut on their bases. The bayonets are made up of soft iron, and, of course, when once bent remain set.”

While it is true that Justice used a variety of used, obsolete and sometimes condemned parts in the construction of his arms (similar to the Whitney “Good & Serviceable” series of small arms), he utilized parts of new construction in his arms as well. His greatest short fall appears to have been the use of wood for the stocks that was not sufficiently seasoned, which lead to shrinkage and multiple service issues, including locks that did not properly function and the rusting of iron parts. Justice produced a variety of patterns of his rifles and rifle muskets, which have been given a typology by collectors, based upon their features. In general, the differences found in the features, furniture and make up of the guns was the result of Justice’s preference to utilize any parts currently on hand, rather than obtaining or manufacturing parts as supplies ran out.

This bayonet is designed for a .69 caliber Justice rifled musket with a bottom mounted bayonet lug, and is most likely the type delivered with the iron mounted “Type I” guns. This pattern of bayonet is illustrated in Robert Reilly’s seminal work American Socket Bayonets & Scabbards as figure B97, and described in the text. The bayonet utilizes a friction fit bayonet socket with a simple two-step mortise cut, similar to the sockets used on US bayonets prior to the adoption of the M-1816 bayonet with the “T” shaped (Wilson’s Improvement) mortise. The blade closely resembles the US M-1835/40 socket bayonet blade, and the presence of a US on the ricasso, surmounted by a small sub-inspection letter A suggests that the blades were acquired from the US government (or US contractors), and were mated with the unique sockets by Justice. The bayonet has an overall length of 20 ““ with an 18” blade that is .808” wide at the widest point and has a 16 ““ fuller running down its face. The socket is 2.62” long, about 3/8” shorter than a US M-1816 bayonet socket, and has a muzzle to stud length of 1.020”. The muzzle diameter of the bayonet is .847” (again, larger than the nominal .830” for a US M-1816) with the rear of the socket having a .914” diameter. As mentioned, the bayonet is clearly marked A / US on the ricasso, and the reverse of the socket is numbered E 118, upside down, in front of the mortise cut. This “serial number” would have mated the bayonet to the Justice musket with the same number. The bayonet is in about FINE overall condition and even shows some of the original cross-grain polishing marks at the ricasso. The bayonet is bright and was probably lightly cleaned at some point in time, but certainly has the appearance of its original arsenal bright polish over most of its surfaces. The blade is full length and is smooth, being free of any pitting, but with some tiny flecks of very light pinpricking scattered here and there the blade. There are also some tiny flecks of surface oxidation and discoloration along the length of the blade face, with some slightly larger flecks of oxidized discoloration on the reverse of the blade. The socket is in similar condition, but shows a few very tiny pits that have been smoothed from an old cleaning, with less visible surface oxidation. The socket remains appropriately round at both ends, and remains completely functional. The bayonet remains quite crisp and sharp throughout and would be a wonderful addition to an equally fine condition Justice Type I musket.

Overall this is a really nice example of a very scarce early Civil War contract socket bayonet for an equally scarce US contract musket. The majority of the .69 caliber PS Justice rifled muskets were of the Type II, brass mounted configuration, so the iron mounted guns can be very difficult to find. This would be a great addition to the display of one of those muskets, but due to the fact that the guns and bayonets were hand finished and fit to one another, the bayonets will not always interchange. This would also be a very nice addition to an advanced collection of US socket bayonets. Either way, this is a fine example that I am sure you will be happy to add to your collection.