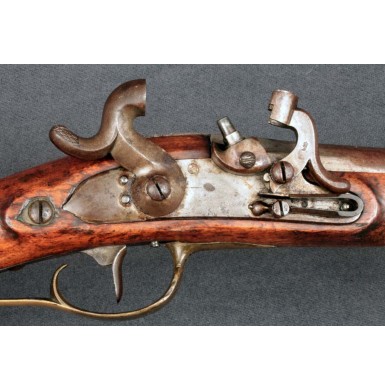 This is a VERY FINE example of the very scarce Prussian Krankenträgerkarabiner M-1855. The Train-und Krankenträgerkarabiner was a smoothbore percussion carbine for the use of the Krankenträgerkarabiner (literally “stretcher bearers”) of the Prussian army and was first authorized in 1855. The carbines were produced from older, altered Prussian M-1821 Cavalry Carbines, and in some cases during the Franco-Prussian War, they were made from captured French percussion carbines. The M-1821 was originally a flintlock smoothbore carbine, that included a sling bar and ring on the flat, opposite the lock. In 1850 and 1851, after Prussia adopted the percussion ignition system, many of the flintlock cavalry carbines were altered to percussion. The alteration to percussion was performed by brazing a large, distinctively “Prussian” style, bolster into the original flintlock touchhole. The bolster included a clean out screw to allow the soldier to clean the flash channel. These alterations retained the original flintlock frizzen spring, and replaced the frizzen with a unique percussion cap safety system. This safety lever secured the cap on the cone (nipple) and also prevented the cap from being struck by the newly attached percussion hammer, unless the safety lever was moved into the “fire” position. In 1855, after a new carbine was adopted for use by the ambulance corps, many of the existing supplies of M-1821 UM (umgeaendertes Modell “ literally “altered model”) Cavalry Carbines were further altered to accommodate the stretcher-bearers. The carbine sling bar and ring was removed and a set of sling swivels was installed, one screwed into the toe of the buttstock and one attached to the upper barrel band. The original iron lower barrel band (which had previously been retained by the sling bar) was replaced with a brass band and a band spring was inlet into the stock to retain it. The upper band was also replaced, in order to facilitate the last major modification, the addition of a ramrod channel to the carbine to carry the ramrod. The Prussian cavalry, much like the Austrian cavalry of the era, had carried their ramrods separately from the carbines. This system would clearly have been inconvenient for the medical staff on the field. Although the Prussian cavalry was being actively rearmed with the new Dreyse M-1857 “needle fire” carbine by the late 1850’s, the obsolete smoothbore percussion Krankenträgerkarabiner remained in use by the Ambulance Corps during the Denmark-Prussian War of 1864, the Austro-Prussian War of 1866 and even the Franco-Prussian War of 1870-1871.

This VERY FINE Prussian Krankenträgerkarabiner (Stretcher Bearer Carbine of 1855) is a great example of a very scarce Prussian military carbine. The gun is lightly marked POTSDAM / GL on the lockplate. The markings are probably light due to the work done to convert the gun to percussion in 1851. The carbine was originally produced as a M-1821 flintlock cavalry carbine in 1831, and that date appears on the brass side plate, opposite the lock. The gun was originally assembly numbered 78 on all of the major components, and that number remains on all the parts that were originally part of the gun as a cavalry carbine. The conversion assembly number 52 was used when the gun was converted to percussion, and that number appears on the percussion safety lever, its mounting screw, the percussion hammer, and several of the other original cavalry carbine parts as well. The left breech of the gun and the left stock flat are both numbered 1000 as well. The gun is well marked with multiple (CROWN) / FW marks “ the government ownership mark of King Friederich Wilhelm of Prussia (Friederich Wilhelm I ruled 1713-1740 & Friederich Wilhelm II (Frederick The Great) ruled 1740-1786). The upper left & right breech flats are also dated 1851 indicating the date of alteration to percussion. In typical Prussian military style, the gun is unit marked on the brass buttplate. The carbine is marked twice “ once for when it was originally issued to the Cavalry and once for its issue to the Krankenträger. The cavalry designation is on the bottom of the buttplate: 3 K 1 135 this likely means 3rd Regiment of Kϋrassier (“Lancers’ or Heavy Cavalry), 1st Battalion (or possibly Squadron), Man #135. The top of the buttplate is marked T . 5. 86.. This likely translates to 5th Train Battalion, Man #86. The “Train” was the support corps of the Prussian army and provided transportation, quartermaster supplies, etc to the army in the field. The Krankenträger, while a part of the Medical Corps, were also a part of this transportation and support “Train” in the field, as the ambulances were a part of the “Train”.

The compact carbine is only 32” in overall length, with a 17”, .61 caliber (15.5 mm) smooth bore. The gun has mostly smooth metal throughout, with a dove gray color to the iron parts with a thin brown age patina over it. The metal remains crisp and sharp throughout, with very clear markings, other than the lock plate marks, which as already mentioned are somewhat weak. There are some light patches of scattered peppering and pinpricking, but nothing substantial. The lock and percussion cap safety lever function crisply and correctly on all positions, although the half-cock notch is worn and the hammer will fall from half cock if the trigger is pulled. The brass furniture of the carbine is un-cleaned and untouched and has a really lovely deep bronze patina, with some even darker greenish patches of patina. The bore of the carbine is in about FINE overall condition and remains mostly bright and smooth, with only some small scattered patches of light pitting or roughness. The gun retains a correct original ramrod, but the rod is numbered to a different gun. The rod is numbered 357 and the butt of the gun is inventory numbered 1348. The rod is original of the correct style and full length. The original upper sling swivel remains in place on the upper barrel band, but the lower swivel is missing. The original lower sling swivel mount is still screwed into the toe of the stock, so it would be a fairly simple matter to find an appropriate looking swivel to mount on it. The stock is in equally FINE condition. It is solid and complete with no breaks or repairs. The stock is of beech, which is notorious for developing drying cracks with age. There is one tiny crack that has developed under the nose cap at the tip of the forend, which remains stable and is barely noticeable. Otherwise, the stock shows only the normal bumps, dings and minor finish mars from use and service in the field. As is typical of many Prussian and Austrian arms of the era, the reverse of the buttstock has a raised cheek piece.

Overall this is a really attractive and very unique Prussian carbine. The gun is very interesting due to its multiple uses and modifications over its service life, and unit markings that indicate that it served with both a cavalry carbine in its original configuration and later with the Krankenträger corps. It is also interesting that it remained in service through the Franco “ Prussian War, when much more modern weapons were available for service. I have honestly never seen on of these carbines for sale and I have no idea how it ended up on this side of the Atlantic. My correspondence with German collectors indicates that these guns are extremely scarce, even in Europe. This would be a great addition to any advanced collection of 19th century European percussion arms, and would also fit in with either a Prussian cavalry or Prussian medical display. It would also be a fantastic addition to Franco-Prussian War collection. It is a lovely gun, in great condition and would be a wonderful addition to any arms collection.