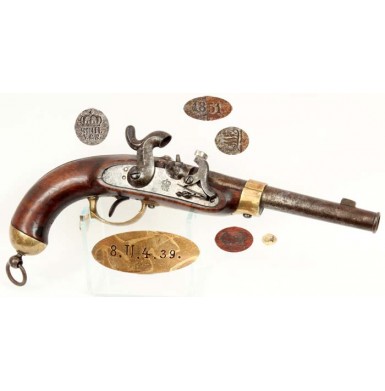 The Prussian M-1850 Cavalry Pistol was obsolete from the moment it was adopted and was absolutely archaic by the time it was removed from service. The gun was a single shot percussion pistol with a 15mm smooth bore (about .59 caliber) and an 8 ““ tapered round barrel with a reinforced muzzle ring. It was a large gun at nearly 15” in overall length, with heavy brass mountings. The pistol also included a unique safety mechanism that both prevented accidental discharge of the pistol and helped to avoid the loss of percussion caps when the gun was loaded. In many ways it was similar to percussion dragoon and lancer pistols that were prevalent in Europe and American during the 1840-1850 period. However, the Prussians had adopted the incredibly advanced M-1841 Zündnadelgewehr (needle rifle) in 1841 and it was in production by the middle of that decade. The M-1841 was the first successful, widely issued bolt action military rifle and was the grandfather of all bolt action military rifles that would be produced in the coming decades. While it was still a rather large bore (15.4mm or about .61 caliber) and still required a black powder powered, paper cartridge, it was so far advanced compared to muzzle loading arms of the era that it seems almost anachronistic that the technologically advanced Prussian army would “saddle” its cavalry with large caliber, single shot, smooth bore, percussion pistol. It seems even stranger, when you realize that the m-1850 pistol remained in use through the Franco-Prussian War of 1870 and was only superseded in 1879 by the M-1879 Reichsrevolver, a double action, self-contained cartridge revolver. Part of the resistance to issuing a more modern handgun to the cavalry was the traditional Prussian approach to heavy cavalry that relied upon the saber charge, or in the case of the Uhlan (lancer) regiments, the charge with lances, to act as shock troops to break up enemy formations. Sadly, this concept of cavalry tactics was out of date by the mid-19th century, but it would take the early lessons learned in the Great War for the entire world’s military to know that the day of the gallant cavalry charge on horse back was truly at an end. The M-1850 pistol was produced by the Prussian state arsenals at Potsdam and Saarn, as well as by private arms contractors in Suhl like Valentin Christian Schilling (V.C.S.), Spangenberg & Company (S&C), and Spangenberg & Sauer (SP&SR), with the pistols produced as Saarn being the least often encountered, as Saarn only produced the guns from 1851 to 1862, when the arsenal was closed and the work load was moved to the arsenal at Erfurt. Even though the saber (or lance) was considered the primary weapon of the Prussian cavalry, a pair of 1850 pistols was issued for carry in pommel holsters by the troopers of Uhlan (lancer) and Kürassieren (heavy cavalry) regiments.

This example of a Prussian M-1850 Cavalry Pistol is in about GOOD+ to NEAR VERY GOOD condition. It was manufactured by the famous Suhl gunmaker Valentin Christian Schilling, and is clearly marked in three lines on the lock, forward of the hammer: (PRUSSIAN CROWN) / SUHL / V.C.S.. The left angled breech flat is dated 1851 and numerous Prussian inspection and proof marks appear in the various small parts and stock of the pistol. The triggerguard of the pistol is unit marked: 8. U. 4. 39. indicating that it was issued to the 8th Uhlan Regiment, 4th Company, 39th weapon. The 8th (East Prussian) Uhlans (Lancers) were organized in September of 1812 and were known by the name of their prominent patron and leader “Graf (Count) zu Dohna” as the Graf zu Dohna Regiment. They fought through the remainder of the Napoleonic campaigns, The First Schleswig War (1848-1851), The Second Schleswig War (1864), The Austro-Prussian War (1866) and served in the 2nd Brigade of the 1st Cavalry Division of the 1st Army Corps, under General von Steinmatz during the Franco Prussian War. After the war the regiment was reorganized into the 43rd Cavalry Brigade, and in August of 1914 found themselves as part of the 2nd Infantry Brigade, 1st Division, where the Ulanen-Regiment Graf zu Dohna (Ostpreußisches) Nr. 8 served with distinction. The pistol is 100% complete and correct, with the only “missing” part being the head of the clean out screw in the bolster. The lock has a medium dove gray patina, with crisp markings, and shows some lightly scattered patches of darker, oxidized age discoloration and minor pinpricking. The lock functions crisply and correctly on all positions and cap safety functions correctly as well. The barrel of the pistol has an thin layer of brown oxidation over a dove gray metal color, and shows scattered patches of light to moderate pinpricking, peppering and some rougher surface oxidation, all indicative of poor storage. The bore of the pistol rates about FAIR and is dark and dirty with moderate to heavy pitting along its entire length. The iron side plate shows a similar level of oxidation and surface scale as the barrel. As mentioned earlier, the bolster clean out screw is missing its head. The pistol retains its original breech pin mounted rear sight, as well as the front blade sight. The original cone (nipple) is in place in the bolster of the pistol. The original iron swivel ring is in place in the pommel cap of the pistol. The brass furniture of the gun has a nice, mottled golden patina, which suggests a very old cleaning that is toning down. The pommel cap, trigger guard and barrel band all show a matching color and all fit the pistol very well. All of the brass furniture shows small crowned inspection marks. The stock of the pistol is in about GOOD+ to NEAR VERY GOOD condition as well. It is complete and solid and free of any breaks or repairs. The stock appears to have been cleaned long ago and this has left the inspection marks and cartouches weak. However, at least one of the (CROWN) / FW, the mark of King Friedrich Wilhelm IV of Prussia, is still fairly legible in the wood, forward of the triggerguard. The stock shows a significant number of bumps, dings and rubs, as would be expected from a 19th century cavalry pistol that saw heavy use and service. There are a few small impact marks between the hammer and barrel tang, which have some lightly colored surface dirt in them. The dirt is easily removable with a small, sharp tool and is not wood putty or filler. This is minor, but mentioned for exactness, as the light colored areas look strange in the pictures below. There is a tiny surface grain crack to the rear of the lock mortise, which is stable and tight, and is mentioned for exactness as well.

Overall this is a solid and attractive example of a Prussian M-1850 Cavalry Pistol, unit marked to the famous Ulanen-Regiment Graf zu Dohna (Ostpreußisches) Nr. 8, the “Graf zu Dohna’s 8th Uhlan Regiment”. This would be a great addition to any European martial pistol collection and would be a perfect item to add to a Prussian Cavalry display or a Franco-Prussian War collection.