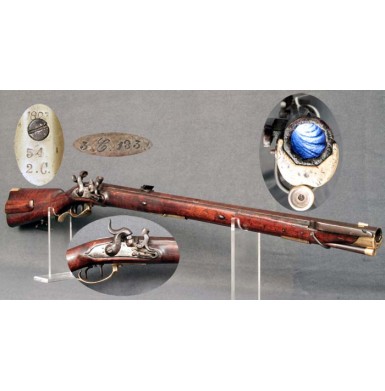 This is a VERY GOOD condition example of the scarce Prussian M-1835 Jäegerbüchse or more commonly, Jäeger Rifle. The M-1835 held the distinction of the being the first percussion ignition long arm adopted by the Prussian military. The Prussians began to experiment with the percussion ignition systems for military arms in 1831, and officially adopted the percussion system for all arms in 1839. During that time, experimental and trial arms were issued to specialized regiments and battalions, while the feasibility and the reliability of the new ignition system was tested. The first widespread issue of percussion arms came with the M-1835 Rifle, which was issued to the “Jäeger” or “Rifle” battalions. The German states had a long history of realizing the importance of a specialized corps of accurate, long-range marksmen. William of Hesse formed the first truly organized group of such marksmen in 1630 during the 30 Years War. Subsequently Frederick II (“The Great”) of Prussia formed the first permanent corps of marksmen, or Jäegerkorps, in 1740. By the coming of the Seven Years War in 1756, nearly every European country had formed a similar corps of specialized riflemen. (See D.W. Bailey’s Percussion Guns & Rifles)

The Prussian M-1835 Percussion Rifle was adapted from the earlier Prussian M-1810 Flintlock Rifle. The M-1810 was one of the first, fairly standardized rifles to see widespread issue to any military force in Europe. Unlike most rifles in military service around the world at that time, the M-1810 was adapted to accept a bayonet. The only significant weakness with the M-1810 system was that a variety of rifling patterns and rates of twist were utilized, making uniform ballistic performance impossible. When the Prussians decided to modify the M-1810 system to percussion, they chose to standardize the rifle by making sure that they were rifled uniformly. In this case a rifling system of 8 deep, roughly rectangular, grooves were combined with a rate of twist of 1 in “ turn in the length of the barrel, was adopted. The guns were about .62 caliber (about 16mm) and had a heavy swamped octagon barrel that was 28.625” in length. The barrels were secured to the stock via two barrel wedges, an upper sling swivel screw and tang screw. The rifles were 44.25” in overall length and weighed in at about roughly 9 “ pounds. A 4.5” long bayonet bar was attached at the muzzle to allow the mounting of the brass handled Prussian M-1810 Hirschfänger saber bayonet. The rifle was equipped with a multi-leaf rear sight, with the leaves regulated to 100, 300 and 1000 Schritt (a pace of approximately .8 meters). The guns were fully stocked to the muzzle, incorporated a sliding wooden patch box in the obverse buttstock for the storage of lubricated patches and a raised cheek piece on the reverse buttstock. The rifles were brass mounted with a buttplate, nose cap and two ramrod pipes made of that material. Sling swivels were installed on the upper stock, below the bayonet bar, and screwed into the toe of the stock. The rifles were equipped with adjustable double-set triggers to enhance accurate shooting. During the conversion process to percussion, the rifles received a patent breech with a small chamber at the rear, and the M-1835 percussion cap safety mechanism.

This example of the scarce Prussian M-1835 Jäegerbüchse is in VERY GOOD condition. The gun was originally manufactured as a flintlock rifle in 1826, and that date is clearly marked on the tang of the buttplate. The rifle was subsequently altered to percussion sometime after 1835. The lockplate is clearly marked with the name of the armory where it was produced, in this case Potsdam, in italic script. The lock is additionally marked with the Prussian Crown over the arsenal name, and with the italic script initials G S below it. The buttplate tang is marked in three lines: 1826 / 54 / 2.C.. The same 54 is present on the base of the rear sight, hidden by the sight leaves when they are folded down. These marks indicate the year of production of the rifle and the unit to which it was issued. The patent breech is marked in a single line of italicized script: 3. C. 183, which is the unit mark and rack number of the gun after it was converted to percussion. The gun is marked on many of the parts with the assembly number 16. This appears on many of the internal lock parts, the side plate, many of the screw heads, etc. As would be expected on any military rifle that is nearly 200 years old, the rifle does have a handful of minor replacement parts. The sear spring and mainspring in the lock are modern replacements, as is the upper sling swivel & screw (although it is a completely correct replacement). The tang screw appears to be a more modern replacement and the ramrod is a correct pattern, museum quality replacement. The double set trigger mechanism of the rifle appears to function crisply and correctly. However, the lock requires some minor work, as the mechanism does not always hold at full cock or half cock, and this may indicate wear to the tumbler, sear or insufficient pressure from the sear spring. It is not uncommon for these complicated locks to get somewhat out of adjustment. The original percussion cap safety system is in place on the exterior of the lock and functions as it should. The gun retains its original and correct rear sight and leaves, as well as the original and correct bayonet-mounting bar. The bore of the rifle rates GOOD+ to VERY GOOD, with deep, crisp rifling and light to moderate pitting along the entire length of the dark bore. The octagon barrel of the rifle has a deep plum-brown patina, and shows a number of minor bumps and dings along its length. The brass furniture appears to have been cleaned at some point in the past and is now toning down to a medium mustard color. The stock of the rifle rates about GOOD+ to NEAR VERY GOOD. The guns is stock in highly figured walnut, instead of the more commonly encountered beech, found on most infantry muskets of the era. Like most rifle of this age, the stock shows some minor repairs. The heavy octagon barrel, combined with the thin wood along the upper edges of the stock made these guns susceptible to splintering and cracking along these areas. The stock shows a handful of minor repairs along the upper edges on both sides, some using the original wood and some showing small pieces of wood expertly spliced into position. The quality of the repairs, combined with the apparent age and war of them makes me feel that most of the work was done during the period of use by a Prussian arsenal. There is a splintering crack visible on the upper right edge of stock, under the bayonet bar. This should be glued to prevent it from continuing to split. Most of the repairs and minor splices are so well executed that they are difficult to see without intense examination under very good light. They in no way detract from the display of this lovely rifle. In fact, the repairs are so well done that they were difficult to photograph. There is also a minor stock crack visible on the reverse side at the bottom of the wrist. This appears to be more a surface grain crack and seems to be stable. The original wooden patchbox is in place, as is its latching mechanism and it functions as it should. The stock appears to have the remains of a very old refinish on it, which has resulted in some scattered patches of “alligator” texture. The balance of the stock shows only the usual bumps, dings, scratches and wear that one would expect from a 200 year old military rifle.

Overall this is really a great looking and very attractive example of a scarce Prussian M-1835 Jäegerbüchse. The gun is essentially complete, with only a small number of absolutely correct, high quality replacement parts. These scare rifles are not often found for sale, especially on this side of the Atlantic. There is even some speculation that the North may have imported some of these percussion rifles during the American Civil War, since there are some guns listed only as “Prussian Rifles’ in Ordnance records, with no further information. No matter what your interest in 19th Century military rifles, this is a lovely example that will surely look wonderful in any advanced percussion long arms collection.