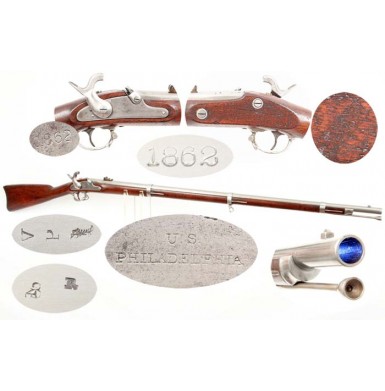 This “Philadelphia” US M-1861 Rifle Musket is in about FINE overall condition. The gun is relatively crisp and sharp throughout with smooth, lightly cleaned metal that has dulled to a medium pewter patina. The metal is free of any significant pitting, although it does show some lightly scattered pinpricking, mostly around the breech and bolster area. There is also some lightly oxidized age freckling scattered on the metal parts. The lock of the musket is marked with a (Spread Winged Eagle) and U.S. / PHILADELPHIA forward of the hammer, and with the date 1862 horizontally to the rear. The lock has a smoky medium gray patina with some scattered patches of scattered age discoloration and minor surface oxidation. The “eagle” mark on the lock is a little light, but the “US / Philadelphia” and the “1862” date are quite crisp and clear. Top flat of the breech of the 40” long barrel is marked with the matching date 1862. Close inspection of the mark suggests that it has been freshened, as the top part the date stamp is thinner than the lower portion. It looks like the bottom half of the date was weak and has been over-stamped to make it clearer. The left angled breech flat is marked with the expected V P (Eagle Head) proof marks, along with a couple of more unusual marks. One appears to be the numbers 3 and 4, stamped over each other, with the “3” on top of the “4”, and at a right angle to it. There is also a deeply stamped R in line with the other odd mark and the rest of the usual proof marks. These may be some of the odd proof marks that Whisker, Hartzler & Yantz refer to when discussing the guns they believe that Rice actually assembled and delivered to the state of Pennsylvania. Further indication of this theory is present on the stock flat, opposite the lock. There is only a single inspection cartouche there, near the rear of the flat. The cartouche is quite visible, but not legible. Contract arms were to receive at least two cartouches when delivered into Federal service, an arsenal sub-inspector’s cartouche and an Ordnance Officer’s acceptance cartouche. Only those arms marked with the second, “acceptance” cartouche would have been paid for. Those guns that were not accepted into Federal service were often sold on the open market to the various states. The tang of the buttplate is stamped U S and the flat, spring retained barrel bands are all marked with the usual U on their right sides. The lock of the musket is mechanically excellent and functions perfectly on all positions. The original M-1861 pattern rear sight is in place on the top of the breech, forward of the nocksform and retains about 50%+ of its original blued finish. The sight is 100% complete, correct and fully functional. The original cone (nipple) is in place in the bolster and is very crisp, retaining about 40%+ of its blued finish as well, although it shows some fading and dulling. Both original sling swivels are in place on the musket, and are fully functional. The original swelled shank, tulip head ramrod is in place under the barrel, and is full length with excellent threads on the end. The bore of the .58 caliber musket rates about VERY FINE. It is mostly bright, with only a couple of lightly scattered patches of darkness and minor oxidation. The rifling remains excellent and crisp, and the bore shows only some very lightly scattered pitting along its length. The stock rates about NEAR FINE and is fairly crisp, with no indications of having been sanded. It retains good lines and edges, but shows numerous bumps, dings and bruises from storage, handling and use over 150 years. The stock is solid and full length with no breaks, cracks or repairs noted. There are some tiny chips of wood missing at the rear of the barrel tang, but these are very minor and hardly worth mentioning. The chips are quite old and almost certainly from the period of use, as the area is worn smooth. There is also a name carved lightly into the reverse of the butt stock, but I cannot make out what it says. The carving appears quite old and could well be from the period of use.

Overall this is a really nice example of a rather scarce Philadelphia M-1861 Contract Rifle Musket. The gun remains crisp throughout and is 100% complete and appears to be correct in every way. Since there are no identifiable and verifiable deliveries of these scarce John Rice contract muskets, it is impossible to determine an exact “typology” as can be done with many of the other contractor produced muskets. Whether this represents a Rice assembled gun sold to Pennsylvania or is possibly a non-contract musket delivery by Jenks is simply impossible to determine. One way or the other this is rather difficult musket variation to find, as at most about 1,500 “Philadelphia” marked lock plates were manufactured, with the actual number being more likely in the 500-1,000 range. This would also be a nice addition to any collection of Civil War rifle muskets and is a nice crisp gun that displays really well.