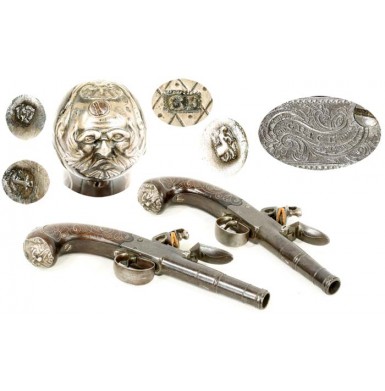 During the mid-18th century, the height of personal protection for the wealthy and discreet Englishman was to carry a pair of “screw-off” (or “twist-off”) flintlock pocket pistols with box locks. The guns offered numerous advantages over earlier designs for concealed carry, including a streamlined action with a center mounted hammer that reduced the width of the handgun and made the hammer less likely to snag in a pocket than a side-hammer design. The twist-off barrel allowed the pistols to easily be loaded without carrying ramrods or other loading tools, as removal of the barrels allowed the chamber to be charged with power that was held in place by a slightly oversized lead ball. Screwing the barrels back on secured the charge and ball, and priming the pan made the guns ready for use. Such pistols could also be easily unloaded if they were not needed to be immediately ready, an advantage over muzzleloading pistols of the period. Wealthier customers often purchased their pistols adorned with decorated sterling silver butt caps and further enhanced with silver wire in the grips. The pistols were invariably of relatively large caliber, intended to bring a close quarters confrontation to a quick resolution.

Offered here are a lovely pair of Revolutionary War Period Silver Mounted Screw-Off Pocket Pistols by William Grice. The pistols are of the classic “twist-off” box lock pattern with center mounted, reinforced flat cocks. The pistols have 2 ““ long stepped round barrels with baluster turned rings at the transitions and canon barrel muzzles. The pistols are smoothbore and approximately 54-bore in the English system, about .44 caliber. The pistols are approximately 7 ““ in overall length, with gently curved, rounded walnut grips that are enhanced with inlaid silver wire and with sterling silver grotesque mask butt caps. The frames are delicately engraved in flowing floral scrolls and with foliate motifs, and are surrounded by geometric boarders that are present on the sides of the cocks as well. The reverse side plates of the pistols are also engraved the name GRICE in a banner. This is the mark of William Grice, a Birmingham based gunmaker who worked circa 1760-1790. Grice was a major contractor providing musket component parts to the Board of Ordnance for assembly into complete arms at the Tower of London. The earliest known contract dates with Grice are dated April of 1760, and he remained a major supplier to the Crown until his death in 1790. Grice primarily provided locks, ramrods and some barrels. His mark is well known on the locks of British service muskets from the period of the American Revolution. Grice also performed some lock repair work for the Board of Ordnance through 1782. Grice is probably best known as the pattern maker for the first officially issued British military rifle, the Pattern 1776 Rifle. Grice established the pattern, and four Birmingham gunmakers, including Grice, Mathias Barker, Galton & Sons and Benjamin Willets manufactured a total of 1,000 of the rifles which were subsequently issued to the British Army’s Light Infantry companies serving in America during the Revolutionary War. Grice also received a contract to manufacture Ferguson Rifles in 1776 as well, which were again issued to troops serving in American during the Revolutionary War. The pistols bear London commercial proof marks on the bottom of the frames where they meet the barrels. As Birmingham did not have a government proof house during this period, quality gunsmiths had to rely upon the London proof house or lesser private proof houses to mark their work and establish its quality. In this case the (CROWN) / GP and (CROWN) / V marks indicate the work passed proof. The pistols are also numbered on their frames and barrels so the correct barrel and frame would always be correctly mated. One is clearly marked with the number 1 on both parts, while the other pistol no longer shows what were most assuredly a pair of 2 marks.

The sterling silver grotesque mask butt caps bear a number of touch marks that allow the origin of the parts, the quality of the silver, the name of silversmith and the date the work was done to be determined. The first mark is an anchor, which is the mark of the town of Birmingham in England, indicating that the silver work was performed under the standards and supervision of the Birmingham Assay Office. Next, the standard mark is present, which is the Lion Passant, indicating that the silver is “sterling”, which is 925 parts pure, and 75 parts other metals. The next mark is a capital letter G in a pentagon, which is the date code that was used in 1779. The “sponsor mark”, that of the silversmith are the letters CF, which is the mark of Birmingham silversmith Charles Freeth. Freeth’s work is well known and regularly found on pistols produced during the 1770s through the end of that century. Freeth registered his “CF” marks with the Birmingham Assay Office on September 14, 1773. The touch marks allow us to fairly accurately date the manufacture of these pistols to 1779, at the height of the American Revolution.

The pistols are in VERY GOOD condition and appear to be essentially untouched. This is quite uncommon for English guns of this period, as the English and European preference has long been to clean antique arms to bright. While the pistols may have been cleaned long ago (evidenced by the slightly weak proof marks on the guns and the lack of mating numbers on gun #2) their current appearance suggests that they have not been touched in a century or more. For the purposes of being to differentiate between pistol #1 and pistol #2 in the photos below, pistol #1 is cocked in all photos, while #2 has its hammer in the fired position. Both pistols have a lovely, untouched plum brown patina. The metal is primarily smooth, but heavily oxidized, with some lightly scattered pinpricking on the barrels and some more moderate pinpricking on the frames. The engraving remains fairly clear and crisp on both guns, and the GRICE mark remains clear on both guns as well. The proof marks are slightly worn, with the marks on pistol #2 being slightly clearer. Both pistols retain nearly all of their inlaid silver wire, with some minor looseness and a small amount of loss on the reverse grip of #2. Both retain their lovely sterling silver grotesque mask butt caps, that show light tarnish on the raised surfaces and more moderate dark tarnish in the nooks and crannies of the “death demon” faces. Both pistol locks are in excellent mechanical condition and the locks function perfectly in every way. Both cocks retain what appear to be their original top jaws, however it appears the top jaw screw of #2 is an old replacement. This is a truly minor issue, but is mentioned for correctness. Both barrels are frozen in place and cannot be unscrewed by hand. They may be able to be soaked in oil and removed with the help of tools, but I chose not to risk damage to the guns or their patina. Frozen barrels on pistols of this age is quite common. The bores of both pistols are dark, heavily oxidized and show scattered light pitting. Both grips are solid and complete and free of any breaks, cracks or repairs. The grips do show some scattered bumps, dings, and handling marks, but show no abuse or significant damage.

Overall this is a really lovely pair of Revolutionary War Period Silver Mounted Screw-Off Pocket Pistols by William Grice. The silver hallmarks allow us to know that the mounting were produced in 1779 and is quite likely the guns were assembled that same year, and certainly by 1780. As noted, this places their manufacture at the height of the American Revolution. While pistols like these were intended for carry by the wealthy gentleman, the pattern was also popular with military officers on both sides during the period. It would be impossible to determine where these pistols were carried, but the fact that the guns have escaped the ubiquitous English and European penchant for cleaning and polishing antique arms to bright certainly suggests that these guns have been in America for a very long time, allowing them to develop their attractive, untouched patina. The guns are really in lovely condition for a pair of pistols that are approximately 238 years old. They would be a fine addition to any collection of Colonial and Revolutionary War era arms, and were made by one of the more famous English military gunmakers of the period. I am quite sure you will be very pleased with these pistols have they have a lovely appearance and display wonderfully.