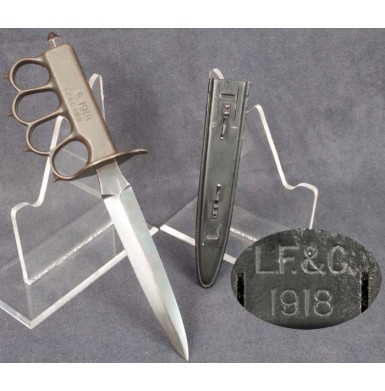 The example of the U.S. Model 1918 Mark I Trench Knife offered here is in NEAR EXCELLENT condition. The knife was produced by the Landers, Frary & Clark company of New Britain, CT. L.F. & C. was established in 1865 and produced a wide variety of housewares, cutlery and event appliances. Many of their products were marketed under the trade name “Universal”. The products of L.F. & C. included everything from scales, mousetraps and ice skates to electric ranges and toasters! L.F. & C. also produced the triangular blade US M-1917 Trench Knife as well. The assets of the L.F. & C. company were purchased by General Electric in 1965. This Mark I Trench Knife is clearly marked in two lines in the brass grip: U. S. 1918 / L. F. & C. / 1918. The brass grip and knuckle guard retain about 30%-40% of their original blackened finish, which has faded and worn, and has blended with a lovely, un-cleaned deep, dark bronze patina. The blackened steel dagger blade is smooth and retains about 60%+ of the original blackened finish, with some minor fading and wear “ mostly from being inserted and removed from the steel scabbard. The blade appears to have had a small amount of touch up blue applied to make the coloring of the blade more uniform. The blade appears to retain its original factory edge, without any additional sharpening. The steel scabbard is in about FINE condition. The scabbard is clearly marked on the rear, near the throat: L. F. & C. / 1918. The scabbard is complete and original and retains both of the original web belt mounting hooks “ a rare occurrence with these scabbards. Usually one or both of the hooks is broken or missing. The scabbard retains about 90%+ of an applied black enamel painted finish. This finish was likely applied during the World War II era, and is not the original blued finish that the scabbard was manufactured with. It is not uncommon to find WWII used Mk1 knives with modified or refinished scabbards. The scabbard shows a couple of very minor patches of scattered light. These scabbards usually show significant denting, but this one shows only a couple of very minor dings and pushes.