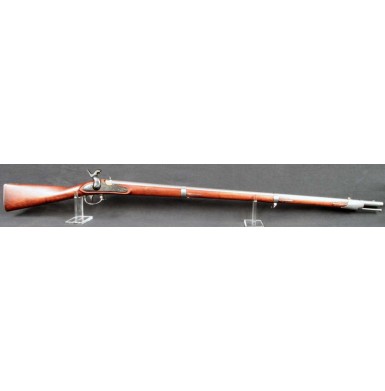 This is a really outstanding conversion of a US M-1822/28 Percussion Conversion Musket produced and altered at the famous Springfield Armory in Springfield, MA. For years collectors have referred to this model as the US M-1816 Type III, but more recent scholarly research by author Peter Schmidt has revealed that the US M-1822 was the new, replacement for the M-1816 musket, and in 1828 it was decided to try to make the guns more uniform in terms of interchangeability and parts uniformity. While the new M-1828/28 was not a true “interchangeable parts’ gun, it was significantly more uniform than the earlier production muskets. The M-1822 series of muskets remained in production at the Springfield Armory through early 1840, when the new Model 1840 musket superseded it. This particular US M-1822/28 musket was produced in 1839 at Springfield. Only 10,000 US M-1822/28 muskets were produced at the Springfield Armory in 1839 and at the end of fiscal year 1839, the arsenal reported 149,700 stands of arms in storage and available for issue. In 1841, the US Ordnance Department officially adopted the percussion cap system to replace the flintlock ignition system. The Ordnance Department then turned their thoughts to the process of converting the thousands of flintlock muskets currently in stock at the arsenals and armories around the country. In June of 1842 lt. Col George Talcott of the Ordnance Department sent a letter to Capt James W Ripley at the Springfield Armory directing him to inspect and classify all flintlock arms manufactured before 1832 “in deposit at the several arsenals and depots throughout the country.” He further directed that the work was to be done by “two Inspectors from the National Armories, under the supervision of an Ordnance Officer”. Guns produced after 1831 were not to be inspected and were considered 1st class. Those produced guns were those produced between 1821-1831 were to be rated as 2nd class arms, and those produced between 1812 and 1820 were considered 3rd class arms. Those produced prior to 1812, or later production guns that were in poor condition, damaged or “not worthy of repair”, were all classified as 4th class and were to be collected and then sold “under future order”. These inspections were preformed between 1842 and 1845, in preparation for the process of altering many of the older flintlock muskets to percussion. Many alteration systems were considered and even experimented with, but in the end nearly all US arsenal alterations to percussion were preformed by the BELGIAN or Cone In Barrel system, which essentially inserted a percussion cone directly into the breech of the musket, removed the external flintlock battery (and plugged the associated holes) and replaced the hammer with a new percussion hammer. The alteration work took place between 1849 and 1854, with a few exceptions. Initially the Springfield Armory, Harper’s Ferry, Watervliet and Watertown Arsenals all handled the majority of alterations, but after completing the guns in store at those arsenals, much of the alteration machinery was shipped to other arsenals to convert additional muskets. In 1850 the machinery from Harper’s Ferry was sent to the St. Louis arsenal. In 1852 the machinery from Watervliet was sent to Kennebec (August, Maine) and in 1853 Watertown’s machinery was sent to Frankford Arsenal (Philadelphia). Throughout the conversion process, Harper’s Ferry and Springfield supplied all of the hammers and cones (nipples) for the alterations. Since the M-1816 series of muskets were not manufactured with interchangeable parts, each arsenal developed its own system of marking the components during the conversion process to insure that the right parts went back together with the right gun. The system used as Springfield was an alpha numeric one, with one or two letters stamped above an Arabic number. The alphas-numeric code appears on the inside face of the new percussion hammer, on the bottom of the barrel and sometimes on the remnants of the brass pan. Only the Arabic number is stamped into the stock, between the barrel tang and hammer.

This particular arsenal converted Springfield M-1822/28 is in NEAR EXCELLENT condition. The gun retains nearly all of its original National Armory Bright finish on the barrel and iron furniture. The lock and conversion hammer retain about 95%+ of their arsenal refurbished case hardened finish, applied during the percussion alteration process. The locks were re-hardened after the conversion process, by case hardening with water quenching. This left a deep blue-black color to the metal, instead of the brilliant mottled colors of color case hardened metal which resulted from the use of different types of charcoal in the heating process, and quenching often in oil instead of water. The lock is very clearly marked SPRING / FIELD / 1839 vertically in three lines behind the hammer, and the matching date 1839 is present on the barrel tang. Forward of the hammer the lock is marked with a Spread-Winged US Eagle, over the letters US. The inside of the lock retains the large majority of its original finish as well. The breech of the barrel is clearly marked with a “Depressed P“ proof mark, as well as an (EAGLE HEAD, a V view mark, and the date 1839 on the tang. The inside of the conversion hammer face is stamped with the alphanumeric mating code YY / 5. This same mark is visible on the bottom of the barrel. The Arabic number 5 also appears in the stock, between the hammer and barrel tang, and on the conversion hammer screw. All of this indicates that alteration to percussion was performed at the Springfield Arsenal. The screws that secure the furniture and lock to the gun all retain between 80%-90% of their original blued finish. Small sub-inspector C marks appear under the barrel and on much of the iron furniture as well. This same mark appears in the breech tang recess of the stock and at the end of the stock as well. The butt plate tang is clearly stamped U S. The lock is mechanically excellent and functions perfectly in every way. The original percussion cone is in place in the breech of the musket, and retains sharp edges and 85% of its original blued finish. The musket also retains both of its original sling swivels and its original ramrod, which is full-length and fully threaded at the end. The .69 caliber bore of the musket is mirror bright and perfectly smooth, retaining nearly all of its original polish. The bore only shows some scattered light patches of dust and dirt accumulation. The stock is VERY FINE+ to NEAR EXCELLENT condition as well. The only real detraction is a very small chip out of the end of the stock on the left side, concealed by the nose cap. It is possible that this small sliver was inadvertently lost during the conversion process. It is only noticeable if the musket if viewed from the muzzle or if the nose cap is removed. The balance of the stock is really wonderful, with sharp, crisp edges and perfect wood to metal fit. The stock appears to have been lightly cleaned long ago, leaving the two cartouches opposite the lock slightly weaker than when they were originally struck. The edges remain crisp and well defined. The two cartouches on the flat, opposite the lock are still very good and relatively readable. They are a script JM in an oval, for Armory Sub Inspector Justin Murphy and a script TW in an oval, for Armory Sub Inspector Thomas Warner. Both men worked at Springfield during the era this gun was made and inspected not only the items manufactured at Springfield, but contractor supplied arms as well. The final acceptance cartouche of Asabel Hubbard is present as well, it is a script AH in an oval on the bottom of the stock, behind the trigger guard. The stock has a handful of small handling bumps and dings, but nothing significant or worth mentioning. The stock is simply gorgeous.

Overall, if you are a condition collector and want to own a truly outstanding example of a US Springfield M-1822/28 flintlock musket, altered to percussion at the same arsenal, you will have a very hard time finding a better one. The pictures below do a great job of showing the fantastic condition and state of preservation of this really lovely musket. There’s no need for a sales pitch, when you want the best, this is the gun that you want in your collection. This is a gun that I am truly proud to offer for sale.